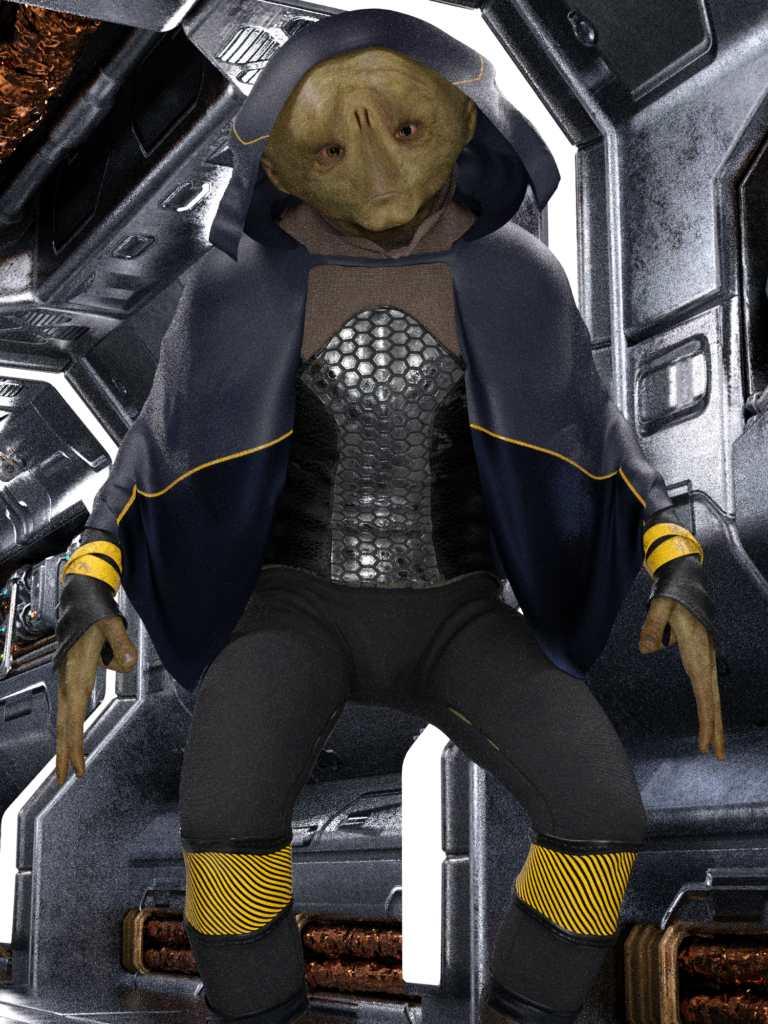 Greylex is a Eopun, a race that was an offshoot of the Eopua. As well as being about a millennia behind in development to the protectors of our galaxy, diverging evolution has seen their physical forms change to become bigger and stronger Having more primitive drives puts the Eopun in the same league as most other races. They therefore have desires and goals as individuals rather than advanced races which act in unison.

Whilst the Eopun have established links with other races and learned to trade they generally keep to themselves as a people. Greylex though is more outgoing and discovered a natural skill for bargaining and making money.     Whilst  keeping his main  “cargo” on a large freighter he also uses a smaller faster transport ship that allows him to get in and out of places fast. This has allowed him to make a living as a smuggler, priding himself on the fact that he can get practically anything to anyone.

For illegal tradings he is one of the most wanted felons on Galaxy Force’s list. Because he does not care what he sells, he has also made enemies of many other races and that includes the Eopua after “interfering” with the people of Earth.

Even in the galaxy word tends to get around and Greylex learned that there was a sub group of humans on Earth known as Citadel that wanted to get their hands on alien tech. They had become noticed in the intergalactic community due to the fact they frequently “baited” passing ships in order to capture their occupants and tech.

Since several races outside Eopua controlled space still used slaves and would pay handsomely for them, Greylex saw an opportunity to gain human captives in return for giving Citadel what he thought was inferior alien technology. He was surprised that Citadel would agree to his terms as whilst he knew humans were primitive he did not believe they would so easily sell their own kind, literally.

Often Greylex received Citadel’s “failed” test subjects but that did not matter. The bipeds could still work and therefore were worth a lot of money. Though in the beginning CLEA could do very little about Greylex, the only saving grace was the fact that groups such as Vanguard and Galaxy Force hassled him which meant his visits to Earth were infrequent.