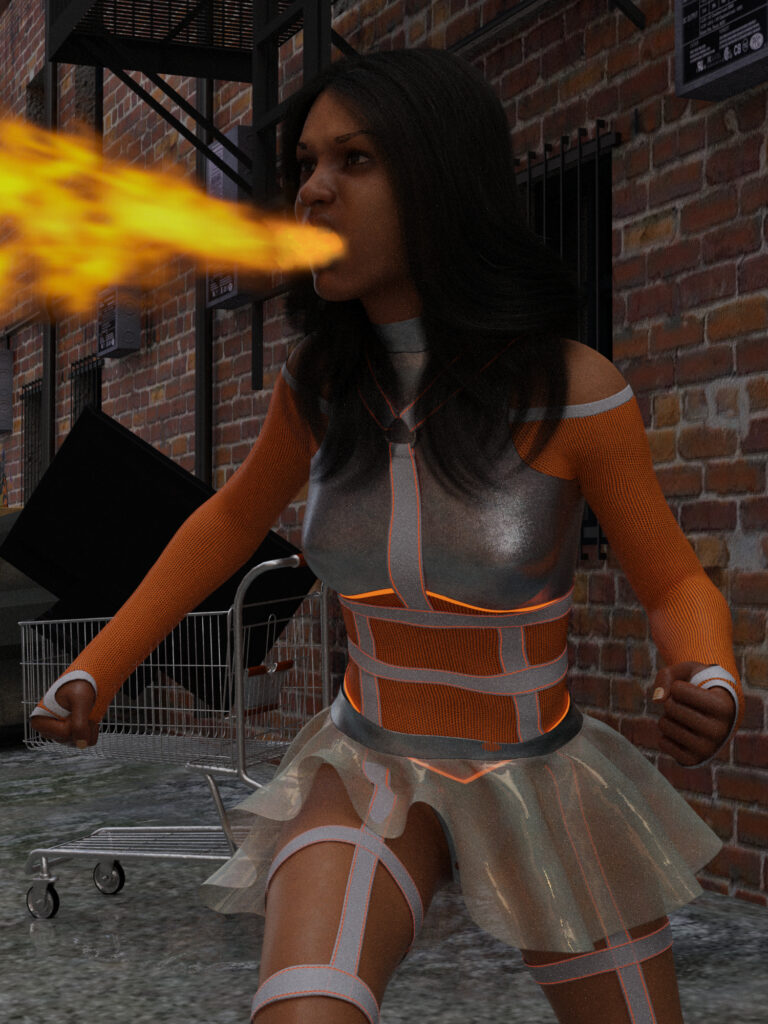 Over the past decade there have been many stories that have surfaced regarding scientists abusing the human rights of Alphas. ARGO and its work is responsible for many cases. Another example is Gemini’s Zodiac twins. In most cases the abused individuals usually recover and try to fight on the side of right, or “right” as they see it. Mia Serrano is one of the exceptions to the rule and her current status as an Alpha villain would have been very different is she had received the right help far earlier in her life. CLEA learned much about Serrano after unearthing the shady work at Blacksmith laboratories during an investigation, and records, video footage and other data reveal they had held onto an Alpha and the mental abuse she suffered all in the name of science.

Mia Serrano came into contact with Blacksmith Laboratories in her early teens. The people there had wanted to obtain an “asset” for some time to study but Black Shadow’s purge meant Alpha humans were thin on the ground. A researcher then heard about the case of a school girl who had accidentally set fire to her classroom using what was described as “flame breath”.

Mia had not fit in well with her peers at school so when she started to get a strange smelling odour from her mouth the other children had cruelly named her Harly-Tosis a play on words of halitosis. Bullied relentlessly she spent many days skipping school to escape the torment. Little did anyone know least of all Mia, she was one of the youngest Alphas to make the transition from inferior to superior (perhaps brought on through the stress of being bullied). The “bad breath” was actually her Alpha ability activating but the particular qualities of the scent did not come apparent until she was taking part in a chemistry class which involved Bunsen burners.
The other kids as usual took every opportunity to send some abuse in Mia’s direction and she in turn began to feel uncomfortable. The wind build up in her stomach eventually came out her mouth in the form of a belch which again the others kids found hilarious but not on this occasion for once the air escaped and made contact with the flame on the Bunsen burner Mia immediately produced a six foot long jet of flame. That was when she and everyone else realised her breath was highly flammable.

Following the fire the school requested Mia be kept away. Her parents responded by trying to find someone that would “cure” their daughter. Only the researcher from Blacksmith laboratories recognised Mia did not have an illness that could be cured but was in fact an Alpha. The lab’s scientists approached the parents and appeared very professional and were able to convince them to hand over Mia for them to investigate. Desperate to help Mia they did not realise they had in fact handed guardianship of their daughter to a bunch of strangers.

Once she was in their “care” the first thing the scientists at Blacksmith did was to create a mask to contain her flammable breath so there would be no unforeseen accidents. The mask itself was uncomfortable to wear so Mia kept taking it off. The scientists responded by making it lockable so she could not remove it.
From then on the experiments began. At first they were little more than simple tests but as time went on they became more invasive. Since most people found her unintelligible whilst she was wearing the mask she was unable to communicate with most people and slowly she withdrew into herself.

Months became years and eventually the sadness and depression gave way to hatred at everyone who had maligned her. However much she wanted revenge and however strong her Alpha ability was, that mask stopped her.

She finally escaped when the Blacksmith facility was attacked by the Night Rangers looking to put a stop to their operations. They had heard about an Alpha being held “prisoner” and chose to intervene. Once free from the clutches of Blacksmith, Architect (Alicia Knight) was able to remove the mask but Mia decided she did not want to destroy it. Instead she wanted to keep it as a reminder of what had been done to her so Mia asked Architect to redesign it so that it could be used to control her Alpha ability.

Thinking she was working for the best reasons Alicia built added a small extension that could contain a spark generator and a pair of vents. The inside was slightly redesigned so Mia’s voice could be heard more clearly. Once the unit was completed Mia was able to use her “new” mask to make herself into a weapon because she could open the vents and ignite her breath at will. The large side filters were still left on since the Blacksmith scientists had created them to prevent filer outgoing breath not incoming air so Mia did not inadvertently fill a room with flammable air. Alicia therefore felt they were useful if left on.

Having shown much kindness to Mia the Night Rangers intended to recruit her but before she got settled her past issues with mental abuse caught up with her. She started to perceive off the cuff remarks as slights at her character and that led her to thinking they were plotting against her. Without warning she turned on them and then fled.

After that she seemed to go in hiding for a while before heading back to where she had come form and starting to exact revenge on the “children” (now adults) that had bullied her. In one night Mia burned down half a town and the authorities wanted her captured. As rogue , CLEA was also notified.

CLEA Psychologists have looked into the “Mia” case and have suggested that she is overtly paranoid and feels everyone is out to harm her. In “normal” cases a person with such a mental condition might choose flight over fight, but since she is now a weapon she will fight if cornered and will target anyone she thinks is against her. Containing her is a long term priority and though classified as a criminal her past makes her a victim as well. CLEA top brass is under the impression that lethal force must only be used as a very last option. A further case of her being stuck in the past is the fact she now refers to herself under the pseudonym Harly Tosis which was her nickname at school.