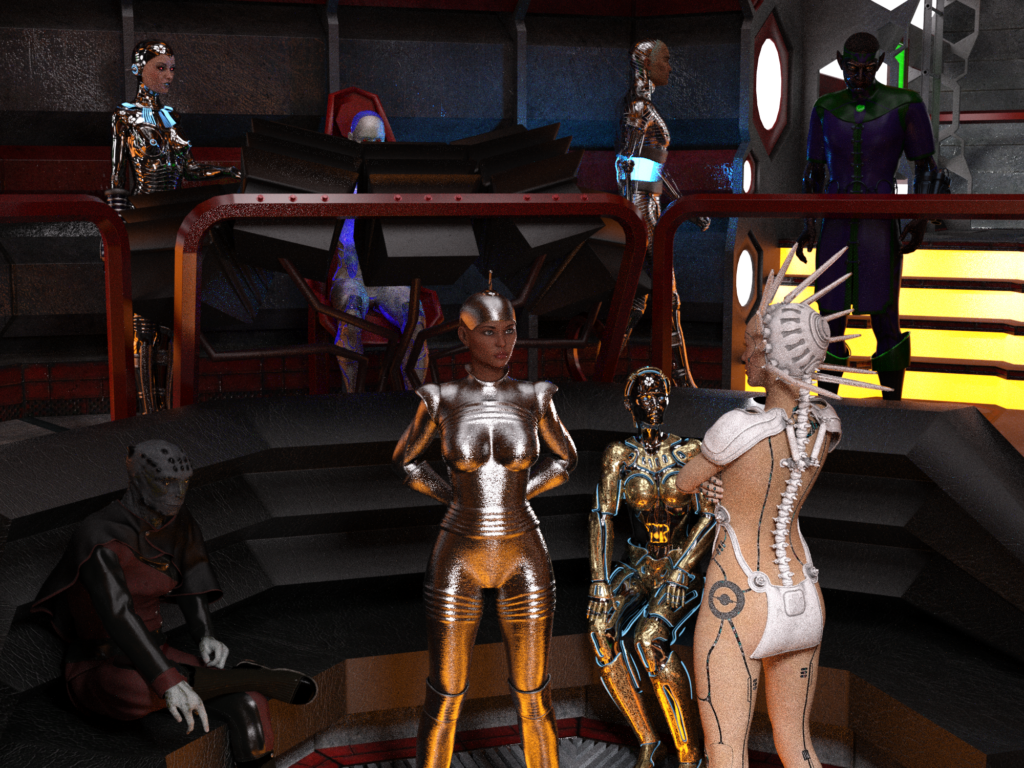 The Mannoth is the name of specialist strike time created by the Myzx Emperor following the escape of alien “bio-samples” from a research facility.

Every since the Myzx resistance movement known as the Ogla made it clear they intended to free all the slave workers, the Emperor made it his priority to destroy them. The Ogla first appeared not long after the Myzx had encountered the Eopua and suffered their first major defeat. The Myzx had almost brought the attack on themselves since they had entered Eopua protected territory and taken humans.

In the battle with the Myzx advanced fleet that followed the, Eopua energy weapons had an affect on the conditioning programming given to every “Chosen” Myzx citizen. Since the Chosen were once Myzx slaves that were given new machine bodies and made proper members of their society, the programming was put in to not only make them serve the Myzx people loyally but to also forget the race they once belonged to which were enslaved by the regime.

Those that survived the battle with the Eopua began to remember their old personalities. Realising they had become slave masters to the people they once belonged to they were determined to make amends. The called themselves the Ogla.

At first they caused minor disruption. Their goal was to get the Emperor to free the worker caste but the Emperor ignored them. They therefore decided a bigger message was needed and so the Ogla hit several worker colonies and freed the slaves.

The Emperor was furious and responded by destroying the colonies killing billions. He then outlawed the Ogla and had them hunted down. The few that survived the Emperor’s wrath decided it was best to continue their duties and hide in plain sight whilst waiting for the day in which they could rise up again.

For two of the Ogla fate had other plans when they were stationed at a remote research facility which house alien species in stasis. The scientists there worked on these bio samples to try and get their implants to work on new alien races with the intent on using the devices to enslave the people. At that facility several humans were being held and experimented on and it was twenty years after being taken from Earth that one of them found a means to get free.

Knowing that security would soon deal with the rampaging alien, the two Ogla decided to show themselves and come out of hiding and lend their support. Over the course of a little over an hour the trio freed many of the captives before escaping. Later on they escaped off world and then stole another ship.
(see Vanguard)

The breakout was a huge embarrassment for the Emperor and he wanted the two Ogla caught or eliminated at all costs and along with any “alien” that helped them. To this end he had the Mannoth created, a specialist “retrieval team”.

Since there was a chance that the team might need to venture into Eopua controlled space which was meant the mission was high risk, the Emperor took the unusual step of asking for volunteers rather simply ordering Myzx citizens to do their duty. This perhaps was the reason why the final team not only consisted of Synthetic and Androids but different generations of both. After military commanders made their final selections from the pool of volunteers they chose Aandralis to lead the team. The remaining five members were selected due to, combat experience, or capabilities or both. Aandralis though wanted two others that were not on the list.

Having learned the Ogla had escaped with humans she wanted some on her team so that she had an insight in the human minds worked in order to prevent alien tactics being used against her. Of the humans they had managed to recapture two were “normals”.  Since the scientists had learned early on that Myzx implants worked on normals but not the Alpha versions of the species that meant they could be “Chosen” and either converted to Synthetics or have their minds transferred to Android Bodies. Aandralis requested Command for the former option. Though her superiors were not prepared to simply convert a new race without thorough tests, Aandralis made it clear she would ask the Emperor instead. That was enough for them to do as she requested.

With a team selected Aandralis headed out in a small scout ship in the direction of “Ship’s Graveyard”. Though she knew their quarry had already been there and gone, having already got a head start on them Aandralis did not think they would intercept their ship before it entered Eopua space. Whilst ordinarily no Myzx would enter Eopua space unless they had a death wish, Aandralis knew the Emperor was so angry that simply stopping at the border would be out of the question. Since she reckoned the Eopua would know how to track a Myzx ship and destroy on sight after the last time both races had met, she opted to take another ship.

Whether by random encounters or through conquering a race, the Myzx acquired many alien craft. After such vessels had been studied and any useful technology taken the craft where then taken to Storage Facility XB9 or as more commonly known the “Ship’s Graveyard.” The main facility orbited a small planetoid and here the ships that had no atmospheric capabilities were held whilst those that did where taken to the planet below. Security was next to none existent since it was well within Myzx territory and most races stayed clear of them.

Aandralis was aware that the fugitives had taken a ship with atmospheric capabilities but did not want the same. She figured that with the Eopua and unknown threats inside “enemy” territory it was wise to take a ship with more firepower.

She settled on a cruiser that once belonged to the Traflagar and insectoid race. The ship had an advantage in that it could actually hold a shuttle so that solved visiting planets. A large ship and only nine Myzx to maintain meant that it would need to be fitted/upgraded with automated systems. She had the option to take some of the worker caste but felt if they found a way to break control, she would have given them a ship to escape in. Not using them meant that before setting off the ship needed some Myzx systems to be installed. Work crews were brought in and supervised by Chrannis an advanced Android Myzx with engineering upgrades.

As the delays started to mount Aandralis grew impatient to get underway but to make a large ship fully automated and operational took time especially as she did not want workers on board during the mission. In the end Chrannis offered a compromise and suggested once the basic were done she would finish the remaining work but that meant her joining the mission. As Chrannis was an Android and not a worker, so the chances of her being disloyal were minor, Aandralis accepted.

By the time they reached the Eopua border, Chrannis had nearly finished the upgrades. Though they now had particle beam weapons Aandralis preferred not to test them on the Eopua. Trying to avoid their patrols and slip over the border was not easy and involved a game of cat and mouse for several frustrating weeks.

Feeling that the fugitives were getting further and further away she reached the point of considering having to attack an Eopua patrol to continue. That option though changed when instead of using force to get over the border someone else managed to escape Eopua space without them seeming to notice.

Curious Aandralis pursued the small ship and disabled it. On board she found an alien called Oolan. She did not recognise his race but that would not be unusual if he came from inside the Eopua territory. He claimed he was a trader and appeared weak and submissive so Aandralis thought she would threaten him to get information. She demanded to know what technology he had for sneaking past the Eopua and he said he had none. He just had accurate timings and knew how to avoid the patrols. Not trusting this Chrannis and the group went over to Oolan’s ship to see if it had and special cloaking technology.

Oolan had no choice but to come clean and admitted he was a thief and had stolen the vessel he had been piloting whilst trying to escape numerous races that had found him guilty of their laws. Over the past several years he had stolen many ships in a bid to keep one step ahead of his pursuers. Now outside of Eopua space he had wanted their ship so that he could once more throw the scent off him.

Having lost the facade of being a simple trader, Aandralis again pressured him on how he got over the border undetected. This time he seemed very keen on stating that his race excelled at mathematics and could identify patterns. That allowed him to become an excellent thief since he could learn the likely time when a hole would appear in a security screen.

Oolan then offered Aandra to sneak her ship across the border if she let him go. She felt she could not trust him though and gave him a counter offer.  Since he knew how to get in and out of planetary systems in the Eopua galaxy she was wanted Oolan as their guide on the mission. The alternative was she simply killed him as he was now a security threat. He took the deal, albeit intending to sneak away when right moment arrived.

Now with a guide to the Eopua controlled territories, Aandralis resumed her hunt for the fugitives. Eventually her journey would take the Mannoth to the home world of the humans. Once there she threatened to harm civilians unless the Ogla handed themselves over along with the people that had helped them. Though she thoroughly intended to carry out her threat she was curious why the Eopua had not come to eliminate her.

Aandralis though would be disappointed in what followed for instead of handing over the fugitives or carrying out her ultimatum, the ship she had spent such a long time chasing fled once more. This forced her once more to pursue them and though she would get close to catching them on many occasions each time the humans and Ogla escaped.