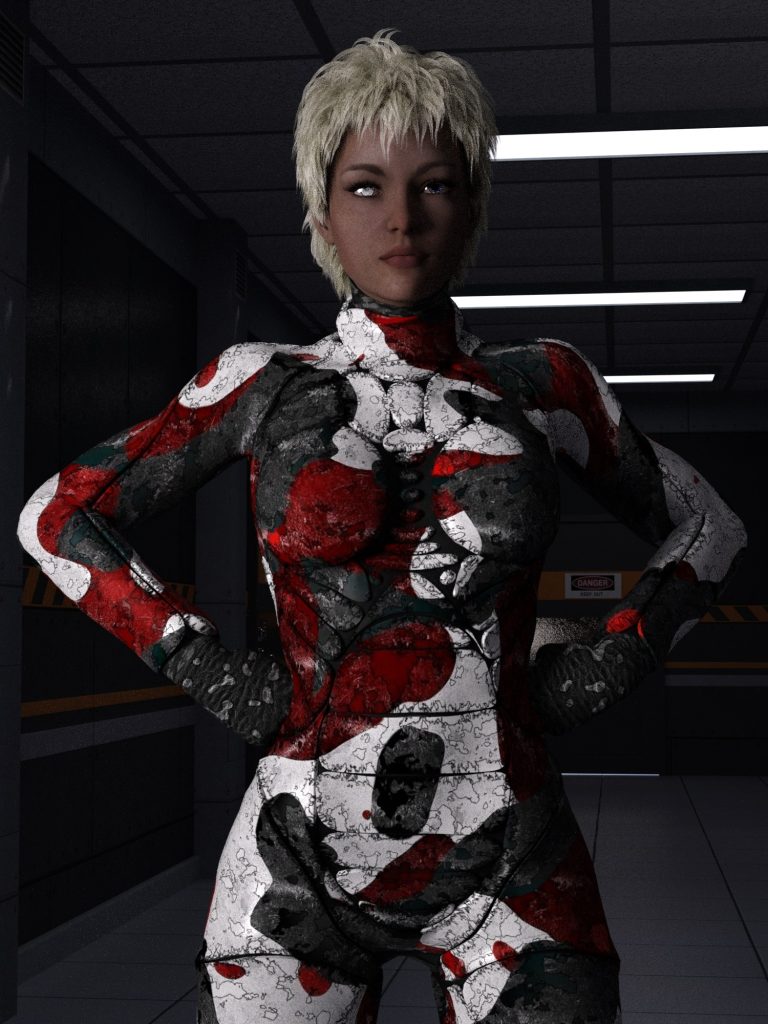 Leonard Jenkins aka The Grey Man, over the course of several lifetimes has had many children. Deborah Gates is one of them. She never knew her father, other than the stories her mother told her. Their relationship was not much more than a one night stand and he abandoned Deborah’s mother when he feared his Alpha abilities might be a danger to her. Little did Leonard or her mother know that Deborah would grow up to be equally as dangerous as him.

At the age of sixteen her Alpha abilities activated for the first time. They enabled her to rapidly heal any physical damage to her body. She used her “gift” to perform party tricks, unaware that there was a secondary aspect to her abilities related to her father that had not yet initialised. Whereas her father absorbed the life force of another which could even reverse ageing, she had the means to absorb blood of another through physical contact.

When this happened for the first time she ended up killing a friend. After being involved in a collision, Deborah was expected her wounds to heal like normal but when her concerned friend touched her, Deborah found herself clamping on, like a drowning man, grasping for support. The reaction, instinctive in nature meant she could not let go and as her wounds healed her friend slowly died. From then on her healing ability only worked through absorbing blood and what was worse she went through energy at a terrific rate. This could only be countered by consuming blood. In effect she was an Alpha Superior equivalent to a vampire, albeit she could still consume ordinary food.

Wanted due to the suspicious nature of her friend’s death, she went on the run. Like her father, she ended up taking on a criminal lifestyle. To satisfy her thirst she would break into blood banks and if really desperate, “borrow” small amounts from homeless people. When not injured she discovered she had a lot more control over her instinctive nature so could take small amounts from others without killing them. That allowed her to master her abilities.

Now the one controlling her abilities and not the other way around, her attention turned to long term survival on the streets. Getting a legitimate job was out of the question as that involved records and records might alert the police. Things changed when Deborah found an opportunity that she could work to her advantage with her Alpha abilities. What she had discovered was that in Pacifica there were many illegal fight rings and lots of money to be made. Though not a skilled fighter by any means, she figured that if she got injured she could use her opponent to heal herself providing she was careful not to reveal she was using an Alpha ability.

For her first few fights, things did not go the way she planned and she was knocked out of beaten badly without being able to make physical contact with her rivals. It was in the early days that she met Jamal Marshall. He was a one time military doctor but was discharged on mental health grounds. Having sought help he’d largely got over his problems but with a history of angry rages and a self professed sociopath, Jamal was unable to find work in the civilian world. Needing for find an outlet for his violent tendencies he found the underground fight rings and along with it a new use for his training. Since no “proper” doctor would risk being associated with a criminal operation he made a lucrative career out of  charging his services, patching up injured fighters.

He was intrigued by Deborah since he could not understand how she keep taking a beating and still keep on going. Jamal offered to fix her up she refused. Seeing that her techniques were all wrong and having a military background he switched tactics and offered to train her to fight in exchange for a share of her winnings. As she was going nowhere she accepted the offer.

Whilst her next few fights still ended in loses, with Jamal’s training she started to improve and once she gained enough experience she started winning. By now Jamal knew of her Alpha ability but ironically once her skills improved she no longer needed to use it to survive in the ring.  Though the illegal fight community was a largely private affair, Deborah liked the fame and notoriety she was getting and soon she started to gain an entourage of followers.

That led to her eventually setting up her own fight ring. Though the host of matches she still liked to prove her skills by taking on some combatants personally. Her arrogance would lead to a mistake though that would change her permanently. One night she heard that one of the combatants was an animal hybrid, that went by the unoriginal name of “The Beast”. Though another fighter was scheduled on her roster, Deborah fancied taking on the supposed unbeatable monster herself.

That was her mistake for in the middle of the fight the Beast got past her defences and clawed her face, ripping out her right eye. For the first time in years she allowed her Alpha ability to take control fully and clamped her hand onto her opponent. Nothing happened and the next thing she knew she was waking up on a bench with Jamal, standing over her.

He knew of her Alpha ability and had kept it a secret as per her request but he had bad news. Despite her unique gift it she could not grow back missing body parts. Jamal had tried to keep the nerve endings open as a means to fit a cybernetic eye or a transplant, but her body had rapidly sealed over the area. She was now missing an eye.

Jamal did his best to make her feel normal and obtained a glass eye on the black market so she looked normal. However Deborah was mentally scarred and she wanted revenge on every animal hybrid. Locating the “Beast” again she caught up with him and stabbed him to death, but the fury inside was not gone. From then on she started changing the rosters so that they featured more animal hybrids. She had then pitted against stronger human opponents just to watch them being beaten up. One woman in particular, Melinda Dunne was particularly brutal so Deborah hired her to become her star fighter.

The matches progressed from normal ones to then using brutal weapons and finally Deborah introduced the idea of red matches, where hybrids would fight each other to the death. People paid serious money to see such matches but there was a problem, and that was the law was always one step away from apprehending her.

When a rich billionaire offered a chance to do a private showing. The night was a huge success and when Deborah asked her client if there were others in his circle that would also like such entertainment he put her in touch with a few business acquaintances.

There seemed no end for the number of bloody thirsty clientele interested in what she had to offer, so Deborah decided to revamp her business and deal exclusively with the rich and powerful. Such people had the means at their disposal to hide her illegal fights and so the Praetorian Club was born.

Though she may have gotten away with her brutal activities she would discover that she had not escaped her father. Now reformed, the Grey Man learned of what his daughter was doing. At first he asked her to stop and when she did not do that he has repeatedly tried to disrupt her operation and make her see the error of her ways. Despite the threats, Deborah enjoys being the Praetor too much as she has too much desire to see hybrids getting hurt.