The Shadow Squad is the only “enforcer” team specifically created by the new Black Shadow crime syndicate. Plans for more teams to deal with the syndicate’s enemies were abandoned when the four heads decided it was easier to hire muscle as and when needed.
Unlike Alpha Strike, the only other team permanently assigned to the syndicate and whose members are all Alphas, the Shadow Squad are “normal” people but the syndicate outfitted them with an advanced custom armour design created by Cade Lewis and being coerced into working for the criminal organisation.
With or without the weapons the team are formidable for the armour alone gives them strength rivalling super humans, and once the don their helmets the outfits give them a sinister enough appearance to intimidate even the most hardened person. 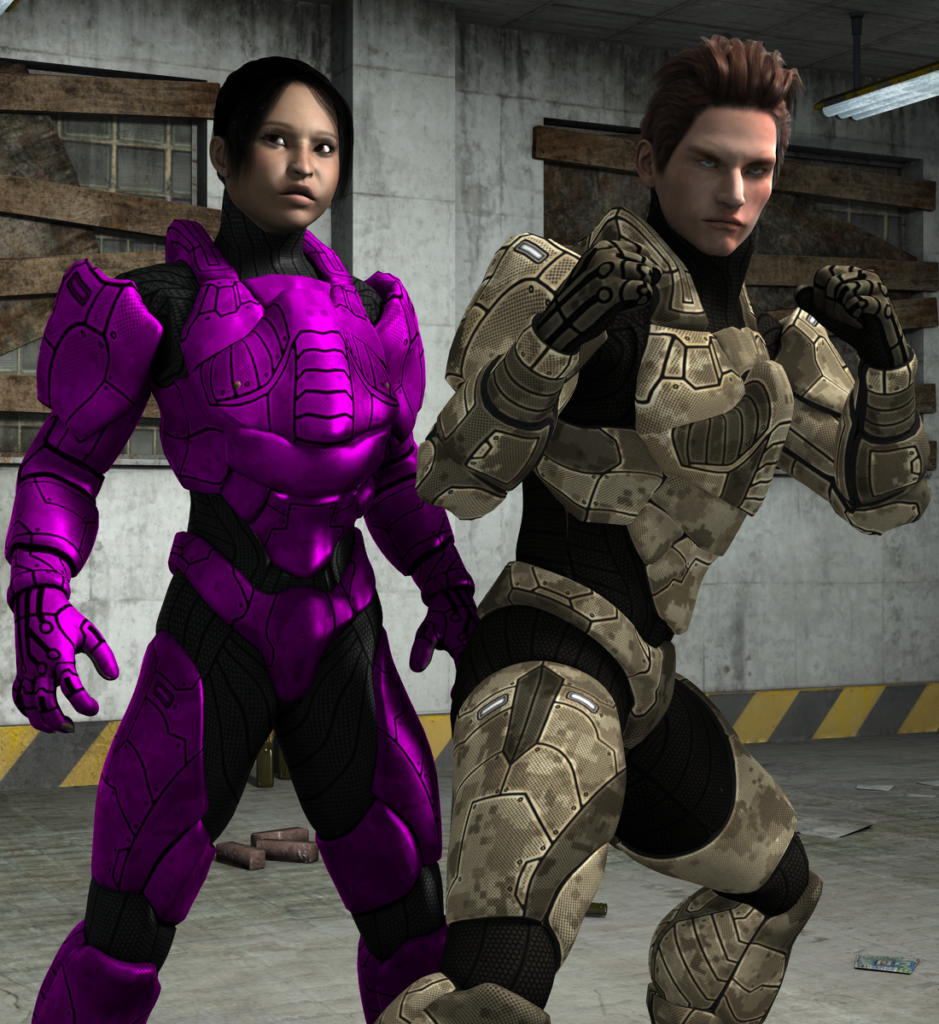 Since being ousted from the army for his treatment of prisoners, Sebastian had found little calling in civilian life for his skills. Divorced from his wife and kid, for a time he was able to work but he had a habit at letting his emotions dictate his actions bringing him into conflict with his bosses. After a string of jobs word got around and he became unemployable. With no income and no opportunities he was desperate to do something. Things were getting so bad he lost his vehicle and was in danger of seeing the house go the same way, so he called in all the favours he had.

One of his contacts, who knew of Sebastian’s violent reputation, eventually replied and told him about a job in the Far East that required someone with a military background and no questions asked.

Though he’d never considered being a mercenary he liked the idea as he felt he was missing a war to go to. The problem was the job could not be done by him alone so he ended up calling in more favours and when they produced little response he began using friends of friends which eventually ended up meeting some very shady people.

Eventually all his work paid off and he managed to recruit three others just like him, kicked out of the military and desperate for money. Also like him they also had “issues” but the need to resolve their individual cash flows helped them to work together.

Once in the Far East accepting Sebastian as their leader was the first hurdle to cross but once the other three realised someone was going to have to lead or else they were all going to get killed, this time logic prevailed. They completed the mission as per their contract and they each prepared to go their separate ways since they couldn’t stand being around each other a moment longer than what was necessary.

However another job offer came up and with bigger rewards so they decided to work together for a second occasion. A victim of their own success, every time the group tried to break up they kept getting new and more lucrative offers. Seemed everyone wanted someone else to fight their conflicts.

Unbelievably, each of them soon discovered they had gained a respect for the others on the team and the more they worked together the less animosity they felt to one another. They considered without the strict military hierarchy and discipline forcing them to conform to an ideal that was why they were finding the camaraderie they had never felt in their respective early careers.

Whatever friendship they felt though came crashing to the ground when they performed a job in Russia for a fringe militant group. Due to poor intelligence they were nearly caught by Russian troops whilst trying to extract the leader of the group from prison. They were then forced to flee the country and the Russian authorities passed the information onto CLEA since they could not apprehend the mercenary team outside their borders.

CLEA already had an extensive file on them and the others but had never managed to get close enough to arrest them because the group were too well prepared when it came to exit plans, until now. Hounded from country to country, the mercenary group realised it was not a matter of if  CLEA caught them but when. However CLEA where not the only ones who had heard of the team. The Black Shadow leader Danny Kendrick had heard all about the team as well. Aware CLEA was close to capturing Sebastian and the others, Danny considered the team might be useful to the organisation to act as much needed muscle. The other Black Shadow heads agreed and within days had mobilised their resources.

Right from under CLEA’s nose operatives working for Black Shadow swiped the four mercenaries and took them to a safe house where Kendrick met them. Danny then proposed a new job opportunity working for the syndicate as muscle and receiving access to resources that would keep CLEA off their backs or simply to walk away and face their fate.

Grateful at being saved and having very few other choices, the team accepted the job and after receiving powered armour they became the Shadow Squad. For some time the refrained from removing their helmets whilst doing the syndicate’s work hence it took a long time for CLEA to realise that the mercenary team they had lost was still active but in another guise.

Some years after working for Black Shadow, Sebastian’s son and girlfriend, Alistair found him. He had inherited his father’s violent nature. Having been thrown out of the family home by his mother, who could not tolerate his attitude or his “psycho” girlfriend, Jana Bartnik, he had learned that his father was doing very well. Needing money, he tried to blackmail his dad, threatening to expose his whereabouts to the authorities. The other Shadow  Squad members considered simply getting rid of the problem on a permanent basis, but Sebastian liked the fact that Alistair had the balls to actually challenge him.

Instead of paying him off Sebastian decided to try and train his son and girlfriend. Frequently the team had been caught in some tight spots in recent times and he thought they could do with some additional fire power. The pair proved themselves very capable although it was some time before the others would accept them and even longer before Black Shadow would trust them. Alistair adopted the code name “Keystone” whilst Jana became “Whirlwind” due to her being quick to temper and lashing out in fury.

To confuse their enemies the team’s armour displays a different colour for each person when in “public”. However few realise that the outer layer of the armour has a colour shifting “chameleon” ability which once activated can make the wearer far harder to see.