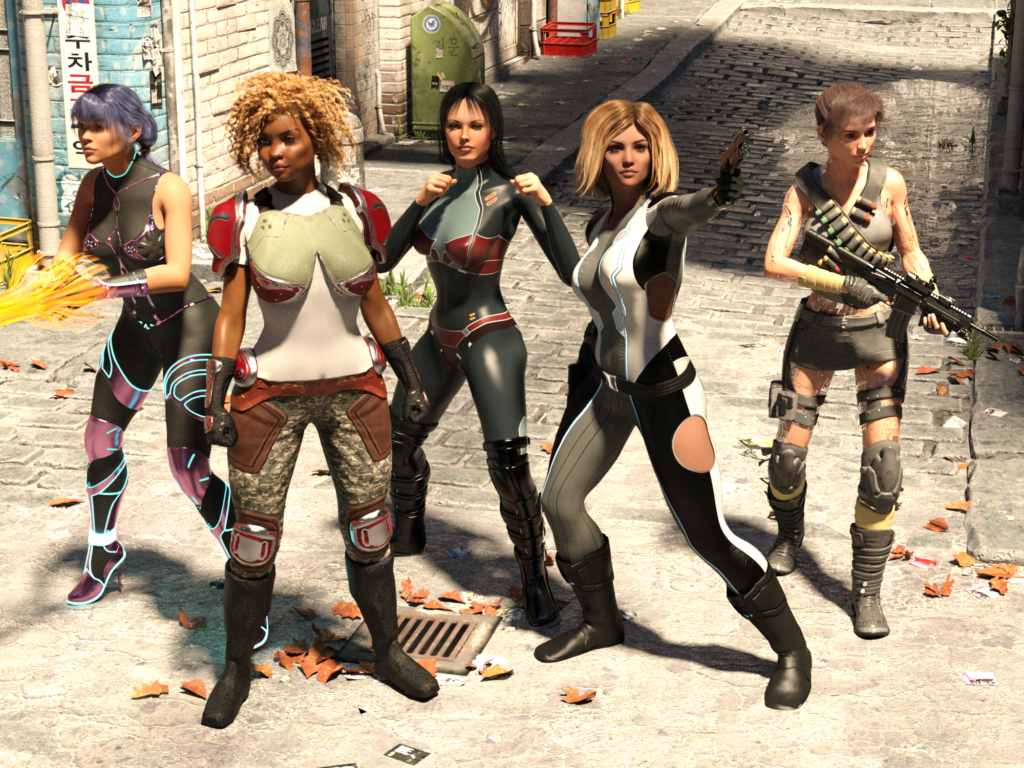 The Sister of Smite are loose team of five mercenaries. Separately they were very good at their “jobs” but frequently ended up competing with each other on the same jobs. After years of fighting each other they decided it was in their own interest if they actually worked together.

Though the intel is sketchy it is believed that Sabine Bourgoin  aka Scramble was once hired to bring in a Raider. Despite being prepared and managing to stun the Raider, when she went to drag it to her transport the  cyborg “awoke”. In the ensuing physical battle some of the Raider’s nanabots entered her body and started to alter her. The pain and shock that created allowed her target to get away.

Over the course of a few days the nanabots manifested themselves on the surface of her skin, creating circuit like patterns. This differs from all known nanobot infections where nothing like that has ever been recorded. Why Sabine was different is open to speculation but once the process was over, her brain had developed an increase in tactical awareness and boosted logic response at the expense of empathic emotions. The nanobots on her skin then allowed her to create a surface electric field which she learned was able to disrupt the electrical signals in a normal person and also able to generate and EM pulse for disabling electrical circuits.

Corianna is a thief, one of the best. Her current “state” is due to her breaking into a top secret weapons lab. After taking what she had been paid to collect she ended up looking into an area reserved for failed prototypes. Corianna did not know this at the time and happened upon an all over body suit that appeared to be made of really tough skin tight material. Thinking it could be useful she stole it.

After returning to her hideout she tried it on. Since no other clothing would fit underneath, the entire suit was completely in contact with her own skin. Once she zipped it up the suit triggered and glued itself to her body. She tried to take it off but it was too late. In time she would learn that the suit could protect her from many types of weapons but the project had been abandoned as it repaired itself by drawing from the hosts body.

Cassie was once an Army Ranger and very loyal to the service. She once volunteered for a medical trial that was supposed to increase the attributes of soldiers to make them superior combatants. At first the drug appeared to work quite well. The strength and stamina in the test subjects massively increased and at the same time their skin became super tough. Then it all started to go wrong for the test subjects were unable to maintain their emotions and developed violent tendencies and uncontrollable bursts of anger.

The scientist tried to purge the drug out of the test subjects but it was to no avail and so in a bid to cover up the experiment, the Army chose to imprison all of the test subjects. Cassie was one of the few with a better control over her emotional state and asked to be freed but to do so would expose the entire program so she was denied her request. She therefore spent months plotting a way to get out of the compound and eventually succeeded. Chased by the army and government agents who wanted to recapture her she  found her army training and her enhancements useful for dealing with them. Then when they finally gave in, instead of going to the press and exposing them, Cassie decided to make a career as a mercenary.

As is often the case, drug companies will often try to fix a past mistake and the same one behind the Army Rangers programme which had “created” Cassie and others, chose to try again, this time with sports people. Trinity, a professional but struggling power lifted volunteered for the programme since she needed money. When the drug was used on her it increased both her skin resistance, muscle mass and muscle density. Such enhancements meant she could no longer compete and when she demanded they fix her they could not. Instead they tried to silence her, which was a mistake as she crushed the two assassins sent to kill her via a deadly embrace which is where she acquired her code name.

Shocked at what she was done, she fled her apartment and went on the run figuring the police would be looking for her. Cassie though found her first. Having discovered the same drugs company that had altered her was at it again she had come looking for them, only to find the carnage left in Trinity’s wake. Together they tried to find the scientists responsible but by the time they got the information it was too late for the company had been shut down and was under investigation. As both were wanted by the authorities it seemed unwise to get noticed. Trinity though no longer had a life or a career so Cassie suggested she become a mercenary like her. This meant out of the five, these were the only two that were working together when the group formed.

The last member to join the group was Helena Leander. She is an Alpha with an ability to eject supercharged plasma. As far as the others were concerned she was actually a pay day. Helena had tried to hide her abilities and had no desires to be a hero. She wanted a normal life. This meant she was inexperienced and was therefore rather an easy target for Impervious, Scramble, Boa and Takedown. Subdued and in kept unconscious on their trip to person that hired them, each member of the group all expressed a feeling that something was a bit “off” with the  man.

Their suspicions turned out to be true when they discovered they had been working for the Broker who had wanted Helena’s DNA to add to Zorn’s collection. Once exposed the Broker, informed them that Helena would come to no harm but having been lied to they did not trust him and so refused to hand her over. When Helena came round the group decided to let her go, but she couldn’t as her idea of a normal life had been shattered. Fearing that others might want to come after her she asked if she could stay with them. Though the rest of the group did not like the idea of “babysitting” they could not turn her away either. In time she would prove her worth and become a valued member of the team.