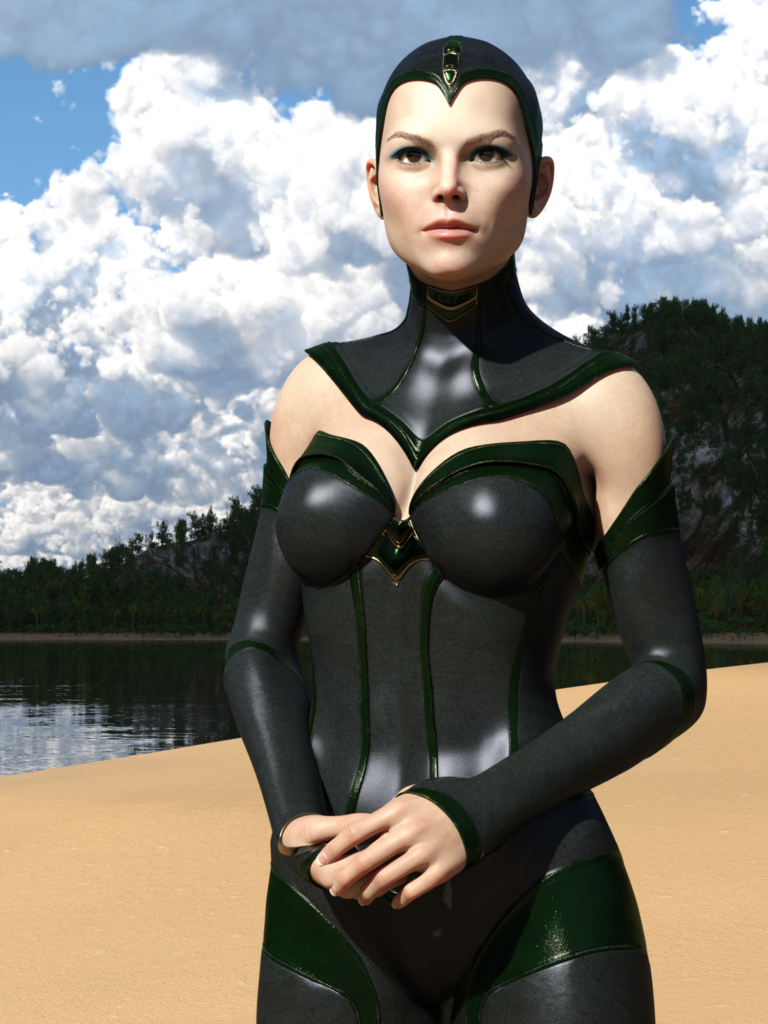 Heather van Hulle belongs to one of the more specialised orders of Magic Wielders that has sworn not to use their gifts to harm anyone and it does not matter if that person is good or evil. Identified at a young age as a “magical psychic” by her mother who was a mystical healer and belonged to a non violent sect of witches known as the “Sisters of Mercy” who specialised in using magic to cure people of their ailments.

Sent in her teens to train with the group, Heather developed extraordinary talents in using magic to fix mental problems in people. Her magic enabled her to remove mental trauma and help people to heal and the trauma did not have to be recent for when she looked into a person’s mind she could see all the way back to childhood. Whilst a person could repress memories and bury them she could see them clearly.

Fully trained as a member of the order, like the others in the group, Heather tried to make sure she used her magic in a way that would not draw attention. She therefore took jobs in mental institutions and worked with psychiatrists where her magical healing could be excused as medical training.

In her late thirties tragedy struck the Sisters of Mercy. Despite the fact that they were only interested in healing people and not engaging in conflict, they inadvertently ruined the schemes for certain practitioners of dark magic. Eventually the Witches Alliance considered the group to be to much of a hindrance and decided to get rid of them.

Having sworn never to use violence, all the members of the group were easy targets for the vengeful group of evil witches. Though the initial attacks alerted the other members of the Sisters of Mercy, they still stood little chance against their attackers who systematically began to slaughter them all, including Heather’s mother. Being somewhat isolated from the main group, Heather avoided the fate of her sisters as she managed to flee before they could kill her. In not fighting back though, once  she started running she no choice but to keep on going.

Cayla Staunton aka Network was the one to eventually spot her plight. Having been hounded by the government who wanted to capture or eliminate her, once safe on Harmony Island she regularly scanned data networks looking for people to save with a similar background to her i.e. being hunted but having never committed any wrong doing. To find such people she had created special algorithms to detect patterns.

Those algorithms triggered and highlighted Heather as being in trouble. Upon looking further into the data, Cayla thought the trigger was a glitch. There were no traces in the data of any government seeking out Heather. That left the only source of trouble to come from the criminal community but she drew a blank there. Under any other circumstances Cayla would have dismissed the evidence and continued but she was aware that numbers and data did not lie and the fact that “trouble” seemed to follow Heather intrigued her.

Over the course of a month Cayla kept tabs on Heather via her connections to the data streams. Though there was nothing able to show any specific threats, it was clear to Cayla that Heather was running from something. Equally clear was that the number of strange life threatening incidents were increasing exponentially. Finally one of members of the Witch Alliance managed to get caught on surveillance footage during an attack on Heather.  This was the end to the mystery as far as Cayla was concerned since Magic was about the only thing that  did not normally leave a data trail.

Now that she knew that Heather was being threatened by a Magic Wielder what could be done about it was something of a problem. She knew that Lance and Nina would not have a problem in rescuing Heather. However Cayla was equally aware that since TTR brought people to the island via magic, then another magical being could possibly follow his mystical footprint and they could bring a potential problem to the island.

She discussed her concerns at length with Nina, Lance and TTR and they decided to take the chance. Sufficed to say when TTR located Heather, she assumed he was one of the witches that were hunting her down. She attempted to flee only for another witch to appear and attack the pair of them. This confirmed to Heather that he was not a threat and she allowed him to transport them out of danger. A moment later they appeared at the beach resort.

Luckily the Witches Council were not able to track TTR  so for the first time she could finally catch her breathe. Now finally free was offered sanctuary on the Island. Lance and Nina hoped another Magic Wielder might be a valuable ally to TTR. However Heather made it clear that she would not use violence. After learning more about her they changed tack and suggested she might like to work with Doctor Psy in helping to rehabilitate patients who came to the island to convalesce.

This seemed more appropriate to her as she got to continue her old work and honour her fallen sisters at the same time. Though not strictly healing people, Heather was eventually persuaded to use her psychic magic to look into the souls of visitors to see if they were as “pure” of heart as they pretended to be. Though all the guests were vetted before coming to the island and full background checks performed a number of security breaches indicated that some guests had ulterior motives and had the means to foil even Network’s data checks. However when introduced to Heather nothing could be hidden. This was when she gained the name Soul Searcher since she could literally search a person’s soul.