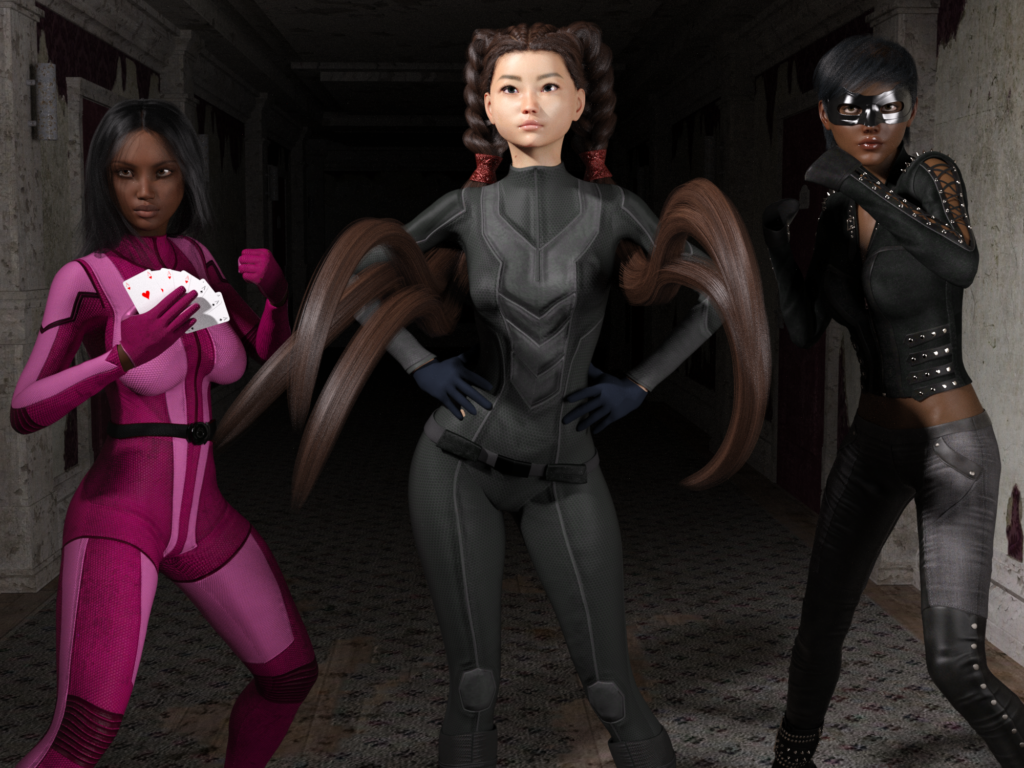 Though perhaps not the most refined of vigilante groups the Street Sisters can certainly hold their own, mainly because of their unconventional methods.

The group started off with Nicole Webb who after gaining her Alpha abilities decided that she should use them for the good of others. Despite her skills she regularly ended up finding more trouble than she could handle and soon grew tired of the visits to hospital when she was only trying to do the right thing.

Eventually after growing frustrated, Nicole went online and tried to find others who might work with her as her “side kicks”. This proved equally frustrating for most of the people she chatted with were generally wannabes with no actual skills or talent. She figured if she teamed up with any of those then she would end up getting hurt by her own side rather than the criminals.

After months of trying to wade through the cranks and the weirdos online, he persistence paid off and she found Marissa Henson. Unlike all the other people she had made contact with, Marissa seemed so lacking in confidence and self doubt that she was completely the opposite. This seemed strange to Nicole as Marissa was an amateur boxer, the last person she felt would be nervous.

However Marissa made a confession and that was after her Alpha abilities activated she was unaware of the change and nearly killed her opponent in the ring. Since then she had been so afraid of her gift she had never boxed again and chosen to sever all social ties in case she had “another accident”. The online conversation with Nicole was the first time she had talked to anyone about her “gift”.

Though Marissa was very nervous, Nicole felt that she was someone that she could work with and managed to get her to meet with her in a bar. The pair talked and Nicole sprang her idea of a vigilante team, and then revealed she was the person known to the press as “Royal Flush”. Marissa though wanted none of it so Nicole persuaded her to let her be trained. Again Marissa did not want to become force into being a vigilante but the idea that she could control her gift did appeal to her.

The pair met several times over a few weeks. An abandoned warehouse served as a training facility since it meant Marissa was not worried about hurting anyone by accident. Working together Nicole managed to help Marissa overcome her fears but after all that, she still did not want to become a vigilante. They therefore parted company.

Fate would intervene on Marissa’s part when she saw an old lady being mugged in a back alley one night. The muggers spied Marissa and warned her off. Normally she would have fled without thinking but she reasoned that she had a special gift and could do something about the scum who felt they could pick on someone weaker than themselves and it made her quite angry. For the first time she no longer felt nervous about her gift and decided it was time to step up and be counted. Able to control her Alpha abilities she was able to give the two muggers a beating that they would never forget but she was able to prevent giving them life changing injuries.

After the old woman got her belongings back she thanked Marissa before disappearing into the night. Marissa now experienced a strange feeling of satisfaction. She had done good and knew she had done good. Now she wanted more and so she contacted Nicole.

Together they began nightly patrols around some of the “troublesome” neighbourhoods of New Tokyo. No longer being alone meant that Nicole rarely entered into a situation that was bigger than she could handle, for she had a partner.

In time the pair would end up meeting Kuniko Arai, a streetwise younger woman with a severe amount of overconfidence. Kuniko had an unusual ability in that she could animate her hair and use it like an extra limb. However whereas Nicole and Marissa were using their gifts for good, Kuniko had chosen to impress others and joined a local gang in order to show off.

They faced off and though Kuniko put up a good fight she could not take on two vigilantes at once. Nicole and Marissa though did not want to get Kuniko in trouble with the law so they decided to let her go after trying to make her realise the gang did not want her as a person, only what she could do with her gift.

It took her quite some time before Kuniko learned her lesson in being used by others. As soon as she refused to use her gift to help the gang, they threw her out. Nicole and Marissa came across her whilst on one of their regular patrols. Kuniko was just wandering the streets, alone and looking dejected. Though she had committed petty crime Marissa and Nicole could not help feel a little sorry for the younger woman. It was then that Nicole made a rash decision to invite her into “their” gang seeing as her old gang had thrown her out.

Though turning a partnership into a trio had some expected complications since Kuniko has a bad habit of acting before thinking which creates more trouble than it solves, they actually did manage to work together. The trio though would come into hardship when Kuniko started to experience severe pain. This was attributed to the fact that though her hair could do incredible things, her neck and back were “normal” and the stress on the joins was too much for her body to handle.

Unsure what to do Nicole reached out to the hero community and the Knight’s Forge responded. Having learned of their crime fighting they were only too happy to help. They “fixed” Kuniko by attaching a cybernetic spine to her existing one greatly increasing her neck and back’s load bearing capability. As well as this they supplied them with outfits more suited to vigilante work than the old clothing they were wearing. Lastly they gave Marissa a special wrist band that functioned the same as power dampening collars given to Alpha Superior prisoners. This meant she could return to her boxing without running the risk of her powers kicking in and hurting anyone accidentally. When she wore the band in the ring it was only her alone in charge, not her Alpha abilities.

It was her interest in boxing that eventually brought the team into contact with Dion Gardner (using the alias Roman McKinley). Dion was actually a distant cousin although the age difference made him more of an uncle. The pair had only met on a few occassions. His “career” as a mercenary made life difficult and the family would not talk about Dion openly. They regarded his work as something shameful.

After setting up a boxing gymn as a means to give his life purpose after choosing to abandon the life as a mercenary he learned that Marissa was a talented amatuer and had considered getting her to join. Though he was using a new identity, and there was a chance she would not recognise him, he decided it was best if he kept his distance due to the family feud.

Always expecting trouble he was well versed in what went on in the criminal world and the players involved. It therefore did not take him long to figure out that Marissa and Uppercut were one and the same. With the Street Sisters rapidly gaining a reputation, Dion figured out that soon or later they might take on something bigger than they could handle andthat concerned him.

He therefore broke his own rule about reaching out and invited Marissa to train at his gymn, as McKinley hoping she might bring her “friends” along, that way he could keep an eye on all of them. She was surprised to hear from McKinley as he had quite a reputation in amateur moxing circles and so accepted the offer without hesitation. When she showed up the “tryout” she did not recognise him nor did she realise that it did not matter how good or bad she did, she was going to be accepted anyway. It would however be a long time before she would learn that Roman McKinley was her cousing and he was an Alpha as well.

This only happened when the Street Sisters decided to take on a violent gang known as the Southeners. They did not play by the rules and when weapons appeared during a confrontation the trio scattered and regrouped at the gymn which they had been unoffically using as a base of operations. The gang tracked them but before thet reached the destination the hero known as “Black Hole” (Dion’s alter ego as a vigilante) interfered, barring the path to the Street Sisters.

Using his alpha abilities Black Hole attacked and after repelling bullets and gave key gang members a beat down leading to the gang fleeing out of fear. The Street Sisters had heard of Black Hole, a hero with violent tendencies and were not sure if he would treat them as friend or foe. Rather than hiding in the gymn they backed away from him, only for Dion to remove his goggles and the trio see the face of Roman McKinley.

If that was a surprise then Marissa would get a second one when “Roman” revealed he was in fact her cousing Dion. Then eveything that had happened since joining the gymn started to make sense for he had seemed overly protective as her boxing coach.

With the truth revealed, Dion formely allowed the Street Sisters to use the gymn as their official meeting place and cleared a room for them. He also took it upon himself to teach them combat skills but other than that he chose to not interfere with their hero “duties” unless they asked for it.