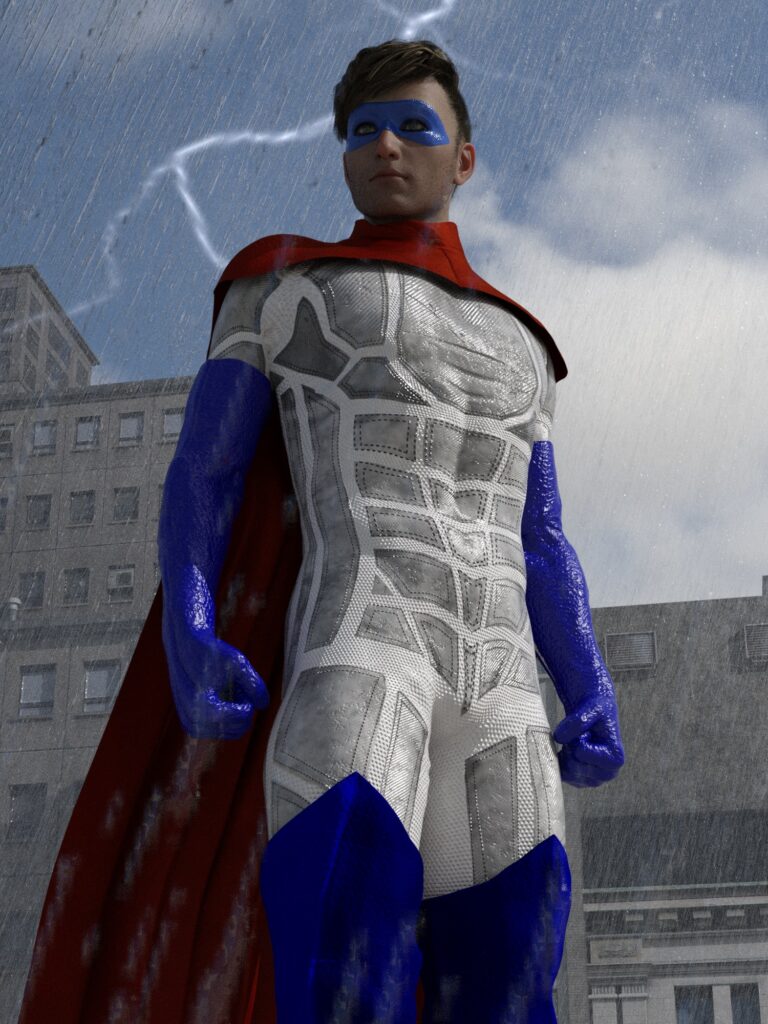 Union was a hero with no history, his past is a mystery to himself as much as everyone else and as far as he is aware his life began when he was twenty six, when police found him lying face down in a field in Southern England with torn clothing and barely a breath left in him. After being taken to hospital he barely survived the first twenty four hours but against the odds he pulled through.

Doctors who had examined him stated he had been beaten to within an inch of his life and he had suffered what appeared to be burns similar to those of mountaineers at altitude. This along with signs of hypoxia left the doctors to reach a startling conclusion. The man had simply fell out of the sky.
Naturally the police wanted answers but when he was finally well enough to speak he had no idea of who he was not where he was nor how he had come by his injuries. The doctors suggested amnesia brought on by his head injury but three weeks on, the man still could not remember anything. By this time he had chosen to adopt the pseudonym Dylan Reynolds (obtained by mixing the names of a nurse and a doctor who had treated him) so that at least he had a name.

Whilst he recovered the British authorities did their best to learn his identity but found nothing from the usual means of identification. Though he was recovered from his injuries the hospital could not release him because without an identity he had nowhere to go.
It was then the CLEA stepped in. They had been following the story for some time and CLEA scientists had noted that on the day “Dylan” was discovered a satellite had recorded a massive energy surge in the atmosphere. This was rather too much of a coincidence so to see if the incident was linked with “Dylan” they offered to supply him with answers and supply him with an interim identity. Dylan accepted the offer and since he was now a ‘somebody’ he could discharge himself from hospital.
However the mystery only deepened for once CLEA scientists made some tests aimed at discovering who he was an anomaly was revealed in his DNA leading to the conclusion that he had been cloned. Results also revealed he was an Alpha Superior albeit he had no idea what his “gift” was and for the first time this seemed to indicate a possible link between him and the event recorded by the satellite. Since nobody in the science community was considered to be working on even cloning humans, let alone Alpha humans this revelation was rather disturbing to CLEA.

After several months passed eventually Dylan’s Alpha ability eventually began to surface and it was discovered he could manipulate the weather. Around that time Dylan also began to remember snippets of how he came to be injured. The memories arrived in his mind like brief flashed of images. He remember flying through the clouds and then getting attacked by something or someone. He could however not recall anything about his past life, his name nor who had attacked him and why. CLEA scientists could only assume that whatever took place during the “battle” resulted in the energy surge detected by the satellite.

Though this was far from the answers Dylan wanted, it was at least a start. CLEA top brass suggested he stay with them whilst they worked to uncover more and suggested he enrol in their White Guardian program. Dylan though felt uneasy about staying with the agency. Though they had been good to him, he had no real connections with anyone and the formal methods of working only added to his feeling of being an outsider.
He therefore decided he wanted to explore other options in finding the truth. Naturally CLEA’s European chief, Malcolm Shaw was unhappy to lose a potential valuable asset but knew that to coerce anyone into becoming a White Guardian would have an impact on gaining future recruits if the word got out.
Despite sympathising with Dylan’s personal issues Shaw warned him that without the support of the Agency he could be in potential danger working alone especially since the identity of his assailant had never been identified. To this end Shaw suggested seeking out the Phoenix Alliance, hoping that with them Dylan might find something of what he was looking for whilst seeking answers to his lost memory.

Taking that advice Dylan made contact with G-Whiz one of the Alliance’s leaders. Not only did the Alliance have plenty of resources but the less rigid structure allowed more informal team relationships. With them at the Europa HQ, Dylan started to feel for the first time he had some sort of proper ‘home’. He was pleasantly surprised by the fact they did not constantly want to question him about his past which had been his experience within CLEA.

To function as a member of the “team”, Dylan had to partake in training. He picked up things pretty quickly and G-Whiz considered Dylan had already been trained, only the amnesia prevented him actually remembering it. Muscle memory though provided an instinctive response which is how G-Whiz reached his conclusions. Once ready to go out in the field, G-Whiz took him to meet the Knight’s Forge and they supplied him with an outfit which would give him some physical protection in case he ever caught up with his attacked from the past. The red white and blue colours were chosen from the fact Dylan had been found in Great Britain and since the colours reminded him of the Union Jack flag, Dylan chose to adopt the hero alias “Union”.

After a while working with the Alliance, Dylan decided to once more venture out to learn more about his past. He therefore became a reserve member and started travelling around the world searching for answers.

Two years later he finally got close to the mystery of the past when he saw details on the news of a new “hero” called “Piledriver”. Her image conjured up flashes of images and he then realised, she had been the one that had attacked him and left him for dead.

After catching up to her, Dylan learned that she had no memories either. Like him being found in England. she had suddenly found herself on the streets of New Tokyo with no recollection of who she was or how she had got there, other than her strange outfit and the fact she seemed to have developed “super powers”.

With assistance from the Phoenix Alliance and Brainbox, the pair had their memories partly recovered enough to know that at one time they had been “other people” and their lives had changed when they had become a victim of Zorn, who “converted” them to Alpha Superiors as part of his experiments. Since they were both powerful the alien had held onto them but no before wiping their memories and “programming” them to be loyal so that they could serve as part of his security force.

Over time Union began to break his conditioning and started to remember who he was and had fled the base. Piledriver had been dispatched to ensure he never revealed the existence of Zorn, but she failed to kill him. The battle though succeeding in damaging his mind and developing amnesia which was why he could not remember who he was. Brainbox doubted he would ever learn who he truly was because the memories of his early life seemed to have been lost altogether as opposed to merely locked away.

Piledriver had later got electrocuted on another assignment which broke her programming and left her in a similar condition. Brainbox though reckoned with time she might just remember her past but there were no promises.

Rather than pursuing a life of vengeance, Union decided he would look forwards as opposed to back. If in his work as a hero he found Zorn then maybe he would think differently but for the time being is content to use his “gift” to do something good.