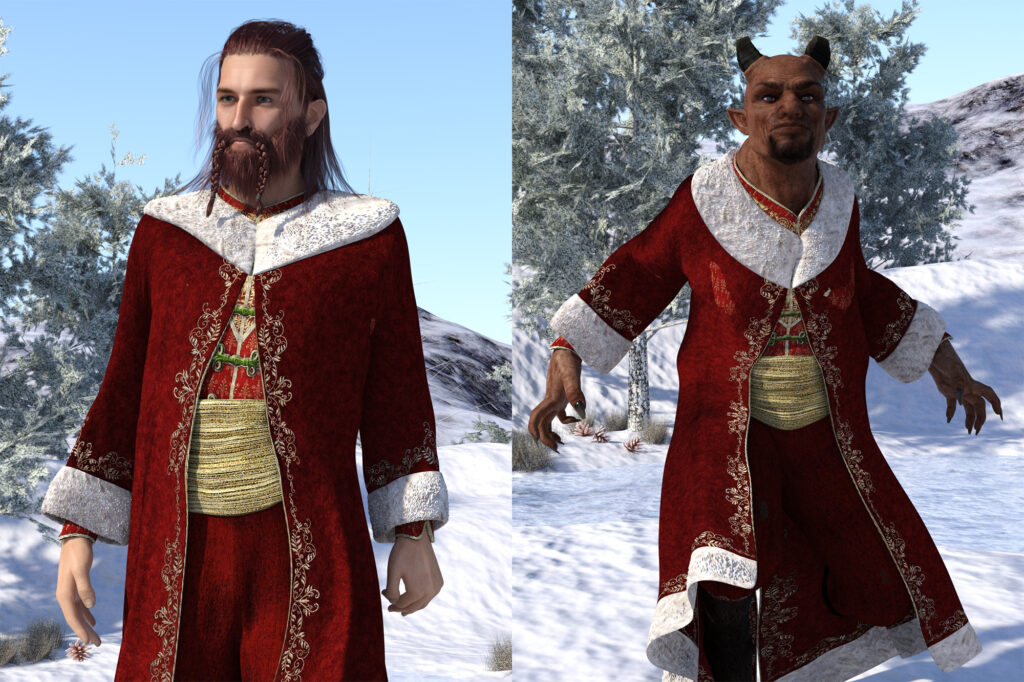 Krampus is a member of the Furverkissmar race that share their homeworld of Hpdhldz with the Essmessell race. As well as being technically advance the Furverkissmar have a special ability in that they can create physical manifestations of emotions. Whenever one of them gets a build up of emotions either positive or negative they produce a dust, gold if its positive related and black for negative.

Exposure of this dust on another sentient being gives them the same “feelings”. Since the creation of the dust requires a build up over time, a Furverkissmar cannot produce both at the same time. One that becomes negative for a long period ends up transforming into a demonic create like form and this has the means to create a concentrated version of the black dust which resembles a hard substance like coal.

After a dark period in their past where many Furverkissmar turned to dark emotions and enslaved the Essmessell, it is forbidden for them to knowingly look for dark emotions. They also learned to avoid violence and so adopted pacifist ways. The problem for the Furverkissmar is that as well as their own emotions they are empathic, so to avoid transforming they cannot be around others with negative emotions. To prevent them being affected by the emotions of the Essmessell the Furverkissmar created technology to block the negative emotions of them. However when they started exploring the galaxy together, the Furverkissmar were not aware that their emotion blocker might not work on alien races and this would be a problem for Krampus.

As the son of the great explorer Santa Claus VII, Krampus always felt he was living in the shadow of his father. When good things came his way they were no due to his own efforts but rather through the fact that people wanted to help the son of “the” great explorer. To say he hated his father for that would be too strong as they avoided negative emotions, so they just never really got along.

This lack of closeness was the reason Santa did not tell his son about one of the dangers of being an explorer, a tragedy from the past. However Krampus was aware of what had happened when he was organising some junk in the family house and had come across some family diaries that belonged to an ancestor, the famed Santa Claus II and his son Santa Claus III.

In his time Santa Claus II was also the greatest explorer. The final entries in the diary revealed that the interstellar transit portal had found a new address to visit in sector 333 333 35123. After the date of the portal travel the diary abruptly stopped. Krampus then found the continuation in his diary.

These revealed that Santa Claus II and his trusty Essmessell assistant, Ivy Hollybush had made the transit. They were scheduled to stay week if all was well but never returned. It was then discovered that the location of 333 333 35123 was unusual for portal travel could only occur over a 3 day period once a year. That meant that the pair were now stranded.

A year later the facility detected an incoming portal but as the sled materialised, Santa Claus II and Ivy Hollybush disintegrated. Santa’s logs were still intact so everything was not lost. An investigation into the accident found that the planet visited, now known as “Earth” had somehow changed the cellular composition of people who had come from Hphldz meaning their cells lost cohesion when the sled returned to Hphldz. The phenomenon seemed to only relate to staying on Earth a long time.

The logs also revealed another problem for whilst the pair had tried to keep a low profile they had inadvertently changed the culture of a “primitive” society (actually Victorian era Britain). Such interference was against everything they abided by as explorers so in a bid to cover up the mistake the expedition had been removed from history and portal travel to Earth was to be locked out of the portal database. This meant the diary entries Krampus had read were the only recorded accounts of the family tragedy.

When Krampus later became an explorer in his own right, the irony was he would end up stranded in the same location as his ancestor, through an unfortunate series of events. The root cause of his accident was down to a software upgrade used to overhaul the portal system. This removed part of the old lockout for the destination Earth. Had actual evidence of the Santa Claus II incident not been deleted then repeating the same problem would never of occurred.

As it happened, Krampus had visited the transit hub to see if any new unexplored world had been “found” on the targeting system. Having rebooted with the new operating system 333 333 35123 reappeared as a new destination. A long distance sled jump was high Kudos so Krampus asked permission to mount an expedition and was granted it from the ministry of exploration.

Using the sled transit, most normal expeditions only took two people initially, the explorer and his bodyguard and then if more people were needed they would be sent after it was realised the destination was “safe”. Krampus therefore met with his Essmessell assistant and bodyguard, Robin Mistletoe and they made the necessary preparations.

The transit was successful. Krampus then sent back the message to say that they had made it and everything was safe but the message would not send. He therefore opted that they return home to invesigate the problem, only the sled would not connect to the portal facility on Hphldz.

What Krampus did not know was that upon his arrival the portal had switched to receive mode as per protocol and that had reactivated an old subroutine that still had the lockout function. With not way home for the time being the pair donned their holographic disguises and tried to find a safe place to wait. During this time they strayed to far from the sled and were no around when the portal was fixed and a rescue party came. With the window to Earth closing they had to return home.

Within a week Krampus started to realise exactly where he was. Though people had moved on he found references familiar. This was when he knew he was on Earth. Knowing he would have to wait a year before contact could be made was bad enough but he also knew by then that he could not go back.

The combination of his own despair and the negativity of the people around him started him on an emotional downward spiral. Though he and Robin survived and supported each other after 11 months he passed through the emotional equilibrium and started to produce black dust. Robin could only watch on as his friend got worse. He was confused why the Emotional Blocker had not worked and could only conclude that the device did not work on humans.

As Krampus inadvertently affected people around him with his black dust, Robin knew that in the best interest of the alien people his friend needed to be neutralised. That meant he had no option but to euthanise Krampus. Robin failed in his attempt and the anger in Krampus was enough to transform him into the feared creature form of the Furverkissmar. In this state Krampus killed Robin and then went out to find other people to terrorise as his mind embraced the darkness.

Santa Claus VII would eventually arrive and was able to put things right with the people Krampus had hurt. He used his gold dust to return his son back to normal. Their meeting was bittersweet for Santa and his assistant Tinsel had to return home before the transit portal window closed and they could not bring Krampus with them without killing him.

Santa therefore vowed he would return each year until he could bring his son home. Though the intention was for Krampus to not return to his creature form, his father’s “cure” of positive energy cannot sustain him for the entire year when many on Earth are surrounding him with negative emotions.

When CLEA eventually learned of the yearly cycle with Santa and Krampus they tried to capture the latter in order to surround him with positive energy but unlike Santa’s concentrated gold dust, Krampus has been able to fend off any attempt to “fix” him in this manner, simply infecting those around him with his black dust and turning them against each other.