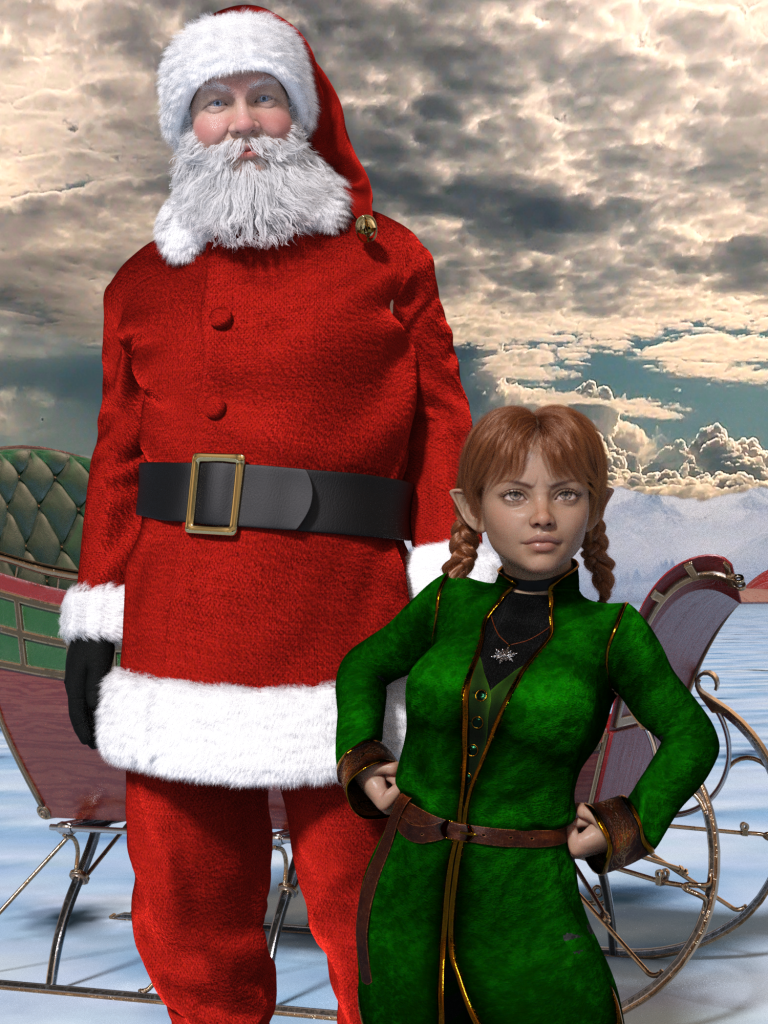 In his heyday Santa Claus VII and his trusted sidekick Tinsel Candycane were perhaps the most famed explorers from Hphldz. He was member of the Furverkissmar race and she belonged to the race known as the Essmessells both of which inhabited the same planet. After retirement he chose to calm down and take a less hectic quiet lifestyle and passed the mantle to his son Krampus.

Thirty years of retirement though came to a shocking end when Santa learned that his son had been involved in an accident regarding the portal FTL transit system. The computer system had been upgraded to improve and unknown to Krampus and the operators some of the subroutines had been removed. This had allowed Krampus to target a planet in sector 333 333 35123.

The destination though had been locked out after an early expedition had resulted in a Furverkissmar and Essmessell getting stranded there. Santa knew the reference well for it was one of his own ancestors that had gone on the expedition. The family knew all about it even if the event had been removed from history for it had tragic ending. Unlike most destinations where the portal could open almost permanently, at the destination known as “Earth” travel could only occur over 3 days after which a link could not be made for another year.

At the time  the expedition director was unaware of this so Santa Claus II was stranded for a year. This was bad but when Santa Claus II and his Essmessell partner Ive Hollybush returned they literally disintegrated upon arrival. Something on the planet had changed their physiology and their bodies lost all cellular cohesion upon their return to Hphldz.To make matters worse Santa Claus II’s expedition logs revealed his presence had accidentally intefered with the planet’s culture. For those reasons it was decided to lock the destination out of the database.

With the outward travel to Earth unlocked, Krampus and his assistant Robin Mistletoe had gone there but then the remnants of the old lockout prevented him coming back. By the time the engineers had  fixed the problem they barely had a day left before the window closed. The expedition did not come back as expected and so a rescue team was sent but only found an empty travel sled.

To avoid getting stranded and not being able to ever come home, the rescue team had to return. Krampus and Robin were declared “lost” but Santa Claus VII would not accept the decision. He felt guilty that he and his son had never been close and that meant he had never passed on the tale of what had happened to Santa Claus II.

A year later, Santa Claus VII decided he was going to find his son, if only to make sure he did not try to return home and end up killing himself. Because he did not know what dangers awaited and his people had to avoid violence at all costs he needed an Essmessell partner to accompany him, but none would join even the great explorer on a fool hardy mission, apart from his old partner Tinsel Candycane.

As soon as the sled was ready and the window arrived, Santa and Tinsel travelled to Earth and began their search for Krampus. They did not like what they found. Using a Yule scanner they found traces of where he had been by the fact he had deposited black dust. Santa kept himself positive and managed to cure the people that Krampus had “infected” by neutralising the effects with his own gold dust. When they eventually found his son, he had  fully transformed and was enjoying spreading negativity.

Santa had no choice but to use all his reserves to “cure” his son and restore him. Once “normal” Krampus explained that he had worked out where he was. Though his father had never told him about Santa Claus II he had actually uncovered old family diaries belonging to Santa Claus II and his son Santa Claus III. His only mistake was not realising why the destination he had punched in had seemed familiar. Stranded on Earth, he had tried to keep a low profile to avoid contaminating the society like his ancestor had but there was so much negativity all around that he could not stop himself being affected by it and once he started producing black dust his only desire was to spread misery and despair and make people suffer. His partner Robin had tried to stop him and so he had killed him which completed the transformation to a full creature form.

The meeting between father and son though was bittersweet for Santa was not only dangerously close to passing from a positive state to a negative one, but the travel window was fast closing. He vowed to return in a year and try to find a means to bring Krampus home and with that he and Tinsel made their way back to their sled and returned to Hphldz.

A year later they returned to find history had repeated. He thus had to repeat what he had done the previous year. Scientists had still not found a way to revert changes to the body of a Furverkissmar  with prolonged expose to Earth’s environment so Santa was unable to bring his son home, but he could at least give him peace and positivity for a while, as well as curing those that had been affected from Krampus’s darkness.

The cycle then ended up more or less permanent. Though Santa tried to find a way of at least keeping Krampus from turning into his “evil” form, the negativity present meant his actions could never quite last a full year. In time Santa and Tinsel got rather good at their work and fixing the problems. Having extra time before the window closed  allowed him to try and help people who were rife with negative emotions and had not be harmed by Krampus. Though expelling positive emotions whilst being in the presence of their negative feelings did drain him, he actually felt good for doing it. Strangely his own positivity actually went some way to limit the positive energy he was handing out.

Over the years of visiting the pair would end up crossing paths with some of Earth’s heroes which led to some unusual encounters. Though his time was limited if he had time and the positive energy to spare he and Tinsel would lend a hand for his gold dust could actually halt a criminal in their tracks, simply because for a brief moment they would no longer be shackled to their negative drives.

On their early trips the pair often made use of their hologpraphic disguises but eventually chose to abandon them as human children could see through the trickery. Considering he was dressed like his ancestor and it was the winter, Santa and Tinsel decided it was easier to let the people of Earth think they were just one of the many “fake” Santas and Elves that were patrolling the streets and shopping malls.