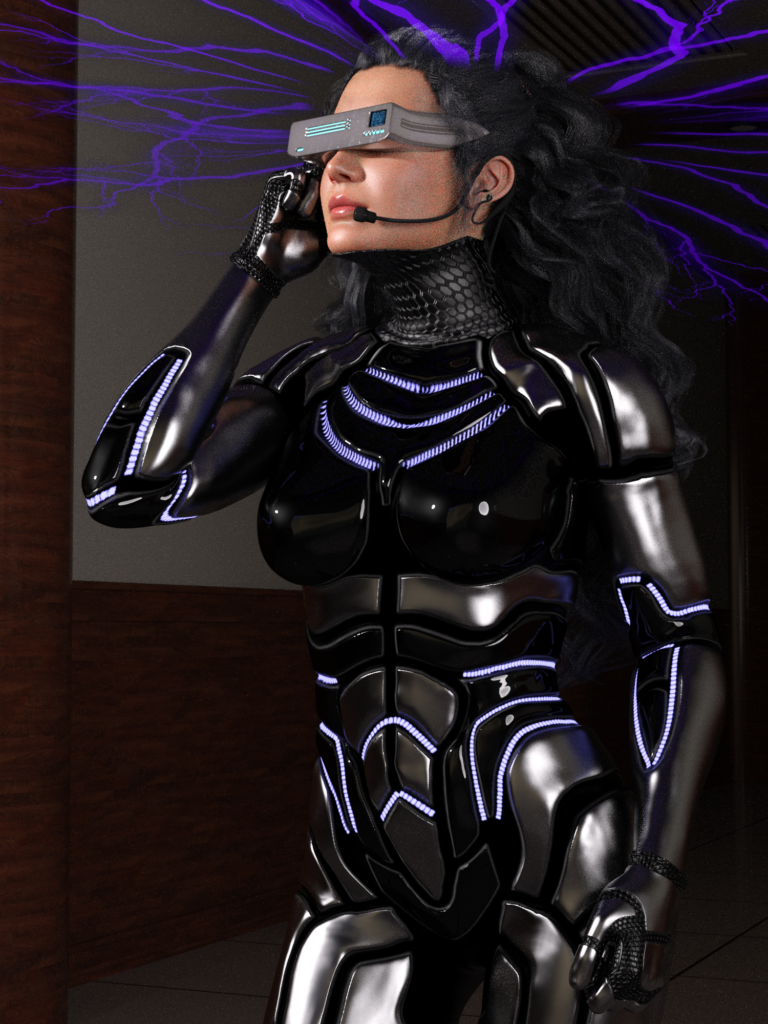 When an Alpha Inferior changes to become an Alpha Superior it is well documented that the abilities they “receive” are completely unpredictable. Scientists though over decades of study have noticed that on rare occasions some of the randomness can be taken out of the equation. An example of this is twins that seem to gain the same abilities whilst siblings often gain similar abilities and another anomaly has been spotted that seems to indicate an Alpha Inferior can sometimes receive abilities that seem to counter an existing condition or disability. Maya Stavrou is one such example.

Maya had been with CLEA for around five years as a Junior agent and her work and dedication had seen her promoted in that time to become a senior level agent. She always impressed her superiors who thought she could go a long way but fate intervened. Responding to an emergency call one day Maya and her partner arrived at a scene of utter chaos. The persons responsible where Alpha Strike that had been hired to steal a device from a secure facility. Though she should have waited for back up (in the form of White Guardians or any other Alpha Heroes capable of dealing with such a serious threat) Maya could not stand by and see innocent civilians being hurt.

Choosing the nearest target she drew her weapon and threatened the woman and order her to stand down. This would be Maya’s mistake for the woman was Meltdown. The villainess dropped her arms as “ordered” but at the same time used her alpha abilities to spray Maya in the face with her acid attack. Unable to get close to her due to the ongoing threat her partner was forced to wait until “proper” help arrived and caused Alpha Strike to flee the scene. By this time Maya was screaming and running around blinded as the acid burnt her face and eyes.

After EMTS’s rushed her to hospital the prognosis for Maya did not look good. The pain was so bad that doctors were forced to sedate her whilst they did their best to clean out the acid but the damage had been done. Waking up the next day she felt the bandage over her eyes. The surgeons explained they had done their best but did not believe she would ever get her eyesight back as the damage was extensive to her eyes and the optical nerve. Maya though could not bare to to consider that and simply hoped they were wrong but all she “saw” when the bandages were removed several weeks later was white, which was light from the window. Friends that visited her were nothing more than dark shapes and that was the best the doctors thought her eyesight would ever be.

Experimental treatments existed but her CLEA medical insurance did not cover risky operations. She was therefore put on sick leave indefinitely as it worked out cheaper for the insurance company in the long run. Blinded and alone things looked bleak for Maya until the day her Alpha abilities activated which gave her the means to “see” by psychic means, literally with her mind’s eye. Whilst this was not true vision as colours were all distorted (similar to a negative image) she could get around easily and as her mind only saw the truth she could tell instantly when someone was lying to her.

Having gained an amazing gift Maya gained a new lease of life she decided to return to work. She knew CLEA was always in the need for White Guardians and since the agency had tested her upon joining and knew she had been an Alpha Inferior there was not need to check her claim that she could “see” things with her mind. In her new role as a White Guardian she tried to settle down and for a while proved a valuable asset, that was until Alpha Strike reappeared on the scene. Wanting desperately for some payback Maya tried to get her superiors to chase down what amounted to little more than rumours regarding Alpha Strike. She constantly found herself at odds with everyone as her emotions got the better of her and in the end she was put on a diciplinary. Rather than punishing her, Maya’s superiors decided that she could not handle the stress of returning to work and decided to pension her off.

Without her job to distract her she had even more time to think about revenge so she drew up plans to make Meltdown pay for what she had done. Having learned from her past mistake Maya decided that she could not go after Meltdown without first taking precautions. During her time in CLEA she had heard rumours of a character called “The Armourer”(Cade Lewis). If the rumours were true he was supposed to be a man that created bespoke armour for heroes but the one thing she did not know was his “price”. Whilst she did not have much Maya figured if it meant emptying all her accounts and putting her assets up as collateral then it would be worth it if she could capture Meltdown and make her pay. The only snag was finding “The Armourer” as he did not exactly advertise his services openly.

It took six months and a lot of detective work before she made a link between Cade Lewis and “The Armourer” and was able to pay him a visit. At first he denied he was the armourer but she was persistant and finally after Cade had done some background checks on Maya he decided to listen to her. What she did not know was that Cade only created armour for those people he considered would use it for selfless purposes not for person gain. Aware she was out for revenge he denied her request, no matter how much money she offered.

Upset Maya decided to look closely into the Armourer’s work trying to find some leverage. The rumours she picked up on the street led her to make a disturbing discovery – Cade had built the armour used by Alpha Strike. Returning to Cade two months later, she demanded that he helped her, after all he had helped her nemesis. He did not deny what she accused him off and admitted she was correct. He had indeed helped Alpha Strike after Black Shadow had conned his brother (Donald Lewis) and duped him at the same time and since they had made him look like a fool he now took many precautions to avoid repeating past mistakes. Consequently he felt in giving her equipment he might make the problem worse because he could not be sure in her quest for revenge she would not hurt any innocent bystanders that got in the way.

The pair argued and he pushed her to her limits but even at the height of her anger she never attacked him. This was proof to Cade that Maya did possess some self control and perhaps he was wrong in assessing her. As he was feeling guilty that Meltdown a person he had supplied armour to had been responsible for Maya’s loss of sight he finally backed down. Maya was surprised he did not want her money but that was on the premise she swore she would not use his creation to commit crime. This she agreed to and a month later she received a call that the work was done.

During this time he had seen C.L.A.R.A. on the news and that gave him an idea how to go about making armour for Maya. As with most of the Armourers designs the suit fit Maya perfectly. Eternally grateful she reiterated her promise to him and swore she would never turn to a life of crime. She then set off on her hunt to bring down Meltdown but as the months passed as she started to involve herself in stopping other crimes she happened across. Her activities caught the attention of the press and she soon gained interest as a costumed adventurer. Once this happened it caused Maya to stop and take a look at herself. Though Meltdown had put her on her current path Maya was feeling that there was now more to life than simply chasing after one person especially as the gift of her Alpha Abilities allowed her to do so much more.

Though never forgetting what Meltdown had down to her, Maya decided to drop her quest for revenge and become a full time vigilante. Though she could never regain true sight her Alpha abilities remain  allow her to work in complete darkness. She also discovered that she can also detect when people are trying to hide the truth from her.

For this reason she was eventually persuaded to join CLEA as a White guardian. In time she would cross paths with the Armourer again who was now running the Knight’s Forge. He supplied her with a visor that would artificially restore more of her vision. Implants were placed directly on the optical nerves which received data from the visor. Though it provided a version of normal sight it was not perfect. It could though allow her to “see” in the IR and UV spectrum so working with her Alpha abilities it made her a formidable weapon.