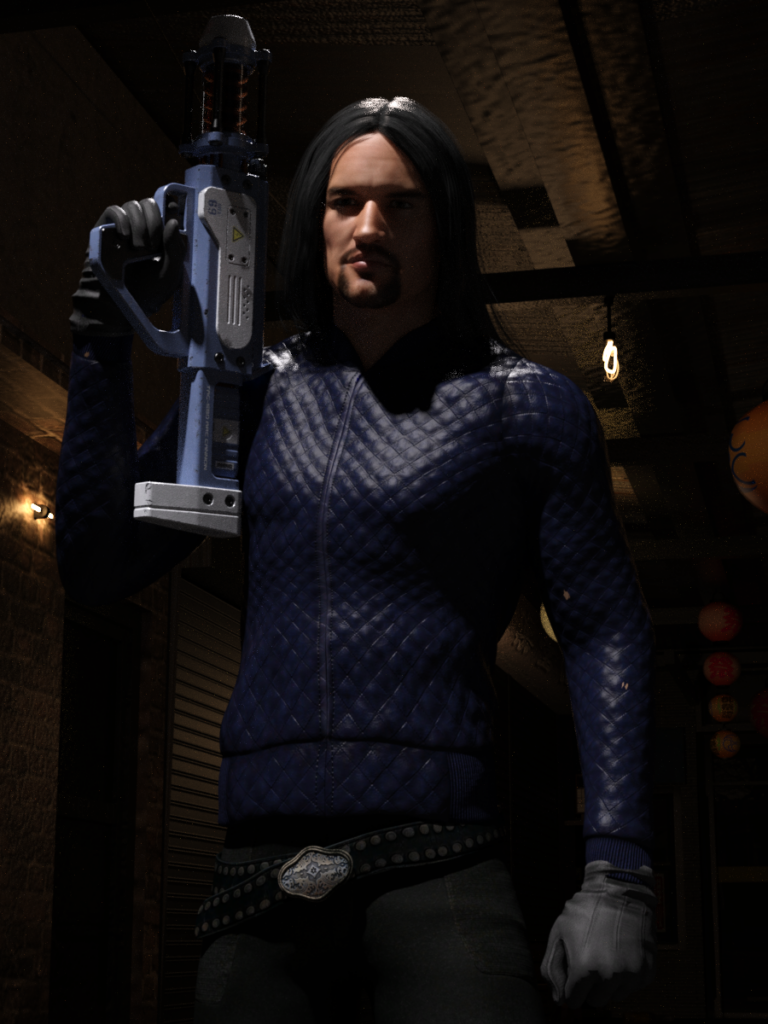 Few people have ever survived being captured by the Quarrud-Xaiqrons when they only had normal “Earth” technology and their own wits to fight back, but Brett McDonough is one that has managed to do this.

Growing up he was more interested in girls and gangs and so by the time he left school he had very little qualifications, little prospects and a string of juvenile convictions. Where he lived in Canada did not have many job prospects, certainly for someone like him so he headed north and eventually ended up working at an oil refinery in Alaska as a labourer.

That was pretty much his career for over twenty years until the Quarrud-Xaiqrons decided to pay the facility a visit and collect some humans to be sold as slaves. Their attack was both swift and brutal. Anyone that ran was frozen and then taken into their ship. Brett opted to hide but it soon became apparent the alien invaders were tracking heat sources. He therefore decided that as they were not going to stop until they had taken everyone then he may as well try something.

After collecting a number of flares he set them off individually to see if he could fool there technology. The ploy worked so for half an hour he played a cat and mouse game with the aliens and eventually the started to get bored chasing ghosts. When only one remained, Brett set off all the remaining flares in one spot and drew his pursuer into an ambush. Grabbing a large adjustable spanner he circled behind the approaching alien and struck it hard on its head. It went down quickly so Brett continued to assault the creature until it stopped moving. He then grabbed its weapon.

Since the aliens were similar in physiology to humans he could actually hold the weapon. Using it was a different matter. It took him ten minutes to find where the trigger was. Then when he fired it his aim was all over the show. His experimentation attracted the other aliens and so Brett tried shooting them but they were immune to their own ice weapons. Though they could have simply frozen him, he got the feeling they were more interested in their fallen comrade so Brett backed away. They then collected the alien he had assaulted and boarded their ship and left. He guessed they figured he was more trouble than he was worth but now he was alone in a deserted refinery.

Having a juvenile record as long as an arm, Brett thought that when the authorities came to investigate what had happened they would not believe his story about aliens and somehow blame him for the disappearances. He therefore decided that he himself should vanish and headed south taking his alien weapon with him.

Upon returning to Canada he obtained some fake ID documents and then found work in a bar. Since the area was so rough the owner was not that interested in qualifications as nobody stuck around the neighbourhood for that long. Over time Brett got to know some of the locals and learned how they were plagued by local gangs. That explained the frequent fights that broke out practically every night. Though Brett wanted to intervene, if the police showed up he did not want them to look too closely at him.

Once night though he lost his patience and threw out a gang member causing trouble. At the end of the night, after he closed up the bar, before he managed to get in his car the gang surrounded him and severely beat him. Furious he wanted payback but was not sure how to get it, until he remembered the alien gun he still had stashed.

Though not a skilled engineer, he had learned enough at the oil refinery how to fabricate parts for equipment and so he set about stripping out the guts of the alien weapon and putting it in a more “human-friendly casing”. For several weeks he worked on the project in his spare time and then once it was ready he took it to a remote spot outside town in order to practise using it. This allowed him to fine tune it without attracting unwanted attention. Though he did not know what it used as a power source, clearly it seemed to never run out. (Later after another gun had been obtained experts would conclude that the Quarrud-Xaiqrons fitted their equipment with micro-reactors so that there was no recycling time needed in between shots). Ammunition was actually water and he had plenty of that!

Once everything was ready, he decided to bait the gang into a trap by deliberately throwing them a pair of them out of the bar one night. As he expected, the were waiting for him when he closed the bar, but he was waiting for them. Before they had the chance to attack he fired his weapon and engulfed the entire gang in a covering of ice. Though alive they were completely frozen them one at a time into his pickup and dropped them outside the local police station.

Sufficed to say when the police discovered a collection of ice sculptures waiting for them they were both amazed and amused. However they did have to wait for the gang to thaw out before arresting them.

From that night on Brett would regularly patrol the area looking for those that made other’s lives a misery. The police in time would figure out who the vigilante was but since they were small town cops and had no means to deal with gangs, the chose to ignore his actions so long as his victims remained unharmed if not cold. Any suspects he handed in frozen they logged the vigilante under a pseudonym which was how Brett gained the alter-ego “Mr Blue”.

Though he sticks to his local area, Mr Blue is not above helping support other heroes and that has seen him transition fully from his juvenile delinquent past to a true hero of the community.