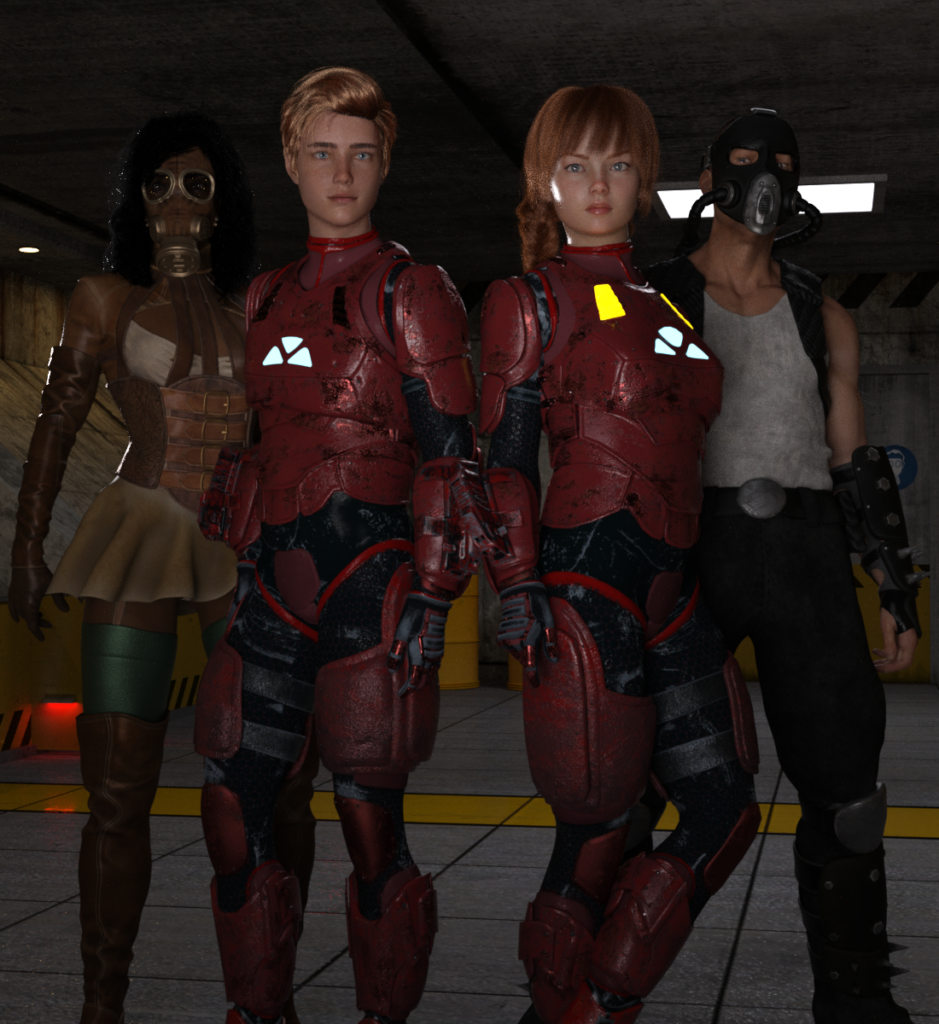 The very existence of Red Shift as a group is all down to one person, Tony Rogers.

He worked (or still works – no intel) as a scientist for Citadel. After helping merge alien DNA with human DNA in the test subjects Sylvester Norris and Elaine Bassett he began to start doubting the groups ethics. Orginally he came to the group, sold on the ideals that they were trying to provide a means for humans to deal with possible extra terrestrial threats. Over time though he noticed a shift towards developing biological weapons, and reverse engineering technology.

Whilst he was told that such work was vital to give ordinary people a means to deal with alien invaders, he was suspicious as the group seemed to spend a good deal of time in selling the end result of their experiments. To reassure him and others like him that it was for the greater good it was explained to Tony that Citadel had to sell the occasional weapon as it was the only way to pay to continue their vital work. The one thing they could not explain was that if their work was so important why they had to use people in their experiments who had not volunteered.

After his most successful experiment which saw Elaine and Sylvester turned into a pair of super humans, Tony decided that he needed to get out. Before any plans were in place he heard rumours of another scientist that had thought the same and had vanished. It did not take a maths genius for Tony to work out that Citadel could not let anyone go who might talk to the authorities. That meant he had no choice.

However, every day he passed the cells where Elaine and Sylvestor were being held, he felt part of him die each time. He was well aware that they had not volunteered for the procedure and yet in the name of his scientific exploits he had gone ahead with the DNA graft. Though he had certainly made them stronger he had left both with a problem of breathing ordinary air. The original alien was a methane breather and somehow that had altered their lungs.

To add to his misery every time he observed them in their cells he noticed them watch back. Occasionally either one or both of them  would thump on the glass and hurl abuse at him until guards arrived and shocked them with stun sticks. Eventually the abuse he saw got too much for his conscience and he decided to find a way of getting them free. It took six weeks of meticulous planning to stage a fake break out and though he got the pair out of Citadel’s clutches they did not thank him. In truth he did not expect either.

Once free the pair to use their newfound abilities to wage a guerilla war on Citadel but despite their best efforts they did not really do much damage. Tony in the mean time decided to try the same from the inside, making amends for all that he had been a part of.

Several years passed and during this time he helped mess up a number of experiment. He also kept tabs on Sylvester and Elaine. That was easy as Citadel security kept monitoring their whereabouts as a means to limit the damage they could do.

The next time he would be forced to take more drastic action was when he was brought in to supervise an experiment with two teenage siblings. The were runaways on the streets of Atlantica and had fallen for the idea of safe and secure surroundings as well as regular meals in exchange to taking part in some “special” experiments.

Having younger bodies meant they were ideal to try out some alien armoured suit that had been “delivered”. The suits needed to interface directly with the host and since older minds were normally “set”, younger minds were already of use. As the experiments went on though, both Erin and Miles started to suspect they had walked into a monsters lair. Tony knew that there was only one of two outcomes for them if the experiment was a success. One of them was the teens would work as Citadel operatives and the other was that they would be eliminated if their loyalty was in question. One thing he did realise was that a lot of initial setting up reverse engineering had already been done and that he was not working on a new project but continuing an existing one.

The vocal complaints expressed by the pair was enough to convince Tony that Erin and Miles did not have too long a life span left and so once again he found himself plotting a way to get someone out from Citadel. In this case he factored in stealing the suits and getting them to escape in them. After a few secret meetings he explained to the pair the dire situation they were in and told them of his plan.

On the day it came to put the plan in motion Erin and Miles followed everything exactly as they had been told. Despite this security got alerted earlier than expected forcing them to fight their way out. The armour came in very handy for that. Just as they were getting clear of the facility, Tony unexpectedly arrived and set off explosives to buy them more time. They never saw him again and assumed he was either caught in the explosion or by security.

Once clear the pair headed for where Tony had told them to seek out Elaine and Sylvester. At first the adult pair thought it was Citadel out to attack them but the misunderstanding was cleared up fairly quickly before anyone got seriously hurt. Erin and Miles told the other two that Tony had requested they look after them. Whilst annoyed that Tony, a person they still bore a grudge against had dared to get them to babysit a pair of teenagers they knew that by themselves, armour or no armour they would not be a match for Citadel’s might.

Though at first neither of them knew what to make of each other, over time they started to bond and formed a very unusual “family”. Whilst they still make an effort to disrupt Citadel whenever the opportunity arises, they have also expanded their vigilantism to tackle criminals who prey on the weak and helpless.