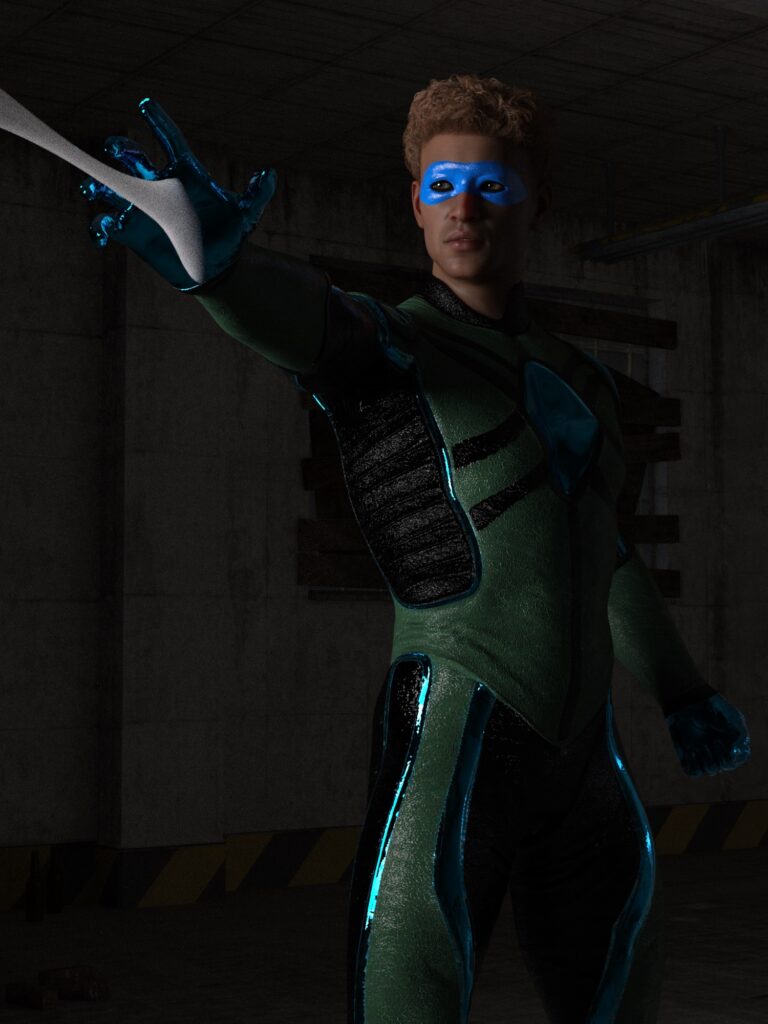 Xander Sallis started life as an experiment. His mother Kerri Sallis worked at a private lab outside Pacifica as a geneticist and like many in her field she was interested in how Alphas were immune to almost all type of illness. This was during the period that Black Shadow was carrying out its purge which had seen many Alphas killed or going into hiding. In such times a private facility having access to biological samples of Alphas was considered a rarity, and this was the only reason why Kerri and her team had been able to continue their research when rival labs had been forced to abandon similar projects.

However the team to one major problem, the more they studied the samples the more they degraded. Her team knew without any fresh samples it was only a matter of time before their work would grind to a halt and they would have to concede defeat. Kerri was obsessed with her research and could not allow that to happen so she made the radical decision to make her own “samples”.

Working with her team she implanted genetic material in several of her embryos. Most of the experiments failed but one took and so she had the egg placed in her womb and took the baby to full term and successfully gave birth to a healthy baby boy she named Xander.

Due to the fact what Kerri had done was technically illegal she and her team agreed to keep the nature of Xander’s existence a secret. To avoid people asking too many tricky questions outside of the lab the team decided to raise Xander in the facility. Though to many this might have been considered a form of imprisonment, Xander did not know anything different and accepted his “unusual” upbringing as being perfectly normal. He knew Kerri as his mother but neither of them knew who the father was since the egg had been fertilised from donated sperm.

Though he was kept hidden from the outside world he was aware of what was happening as he was not stopped from watching TV or using the internet. In fact his only limitation was being never to experience what he saw directly. As what she was doing was denying him a normal life Kerri informed him from an early age that he was “special” and might one day be a responsible for changing the lives of ordinary people and there might be people outside the facility that “would not understand and might want to harm him.” He accepted what he had been told as he had no reasons to suspect his mother was stating anything but the truth.

Without the usual life distractions (apart from frequent “test” sessions) whilst growing up Xander had little left to occupy him other than study. Naturally he chose to learn the same field as his mother and by the time he was sixteen he was quite an accomplished geneticist in his own right.
It was around this time that Kerri told him she wanted to try a series of experiments to try and artificially trigger the change from Alpha Inferior to Alpha Superior. Kerri and her team knew this was another important area of study so she did not see the harm in capitalising by having an Alpha test subject and so they began a second line of research.

Despite the fact they were no closer to solving the original problem of isolating the genes that gave Alpha’s immunity, Kerri, her team and Xander were all convinced that the answers they were seeking was just out of their grasp.

However another ten years would pass before they “solved” the problem of artificially jump starting an Alpha’s transition from Inferior to Superior status. During this time Zodiac defeated Black Shadow and Alphas came out of hiding. Unlike before very few choosing to volunteer for scientific research which meant as Kerri’s team were the only ones that had been able to continue with unbroken studies then they were theoretically the world leaders (except for ARGO which was equally as advanced in studies only they went about their research through criminal means).

Like most great research breakthroughs then team actually stumbled on a way of triggering Xander’s status change by accident. One of their many failed experiments produced an unexpected anomaly and from this the team were able to extrapolate data which led to a new theory. The result of this was yet another experiment but this time it was a success and thought it involved a painful few minutes for Xander, as opposed to a gentler “natural” change which took a few weeks, the end result was he became the first Alpha Superior to become artificially “activated”.

As with every other Alpha Superior the nature of his gifts were still random. In his case he was able to eject sticky resin like substance from his hand and whilst it was fascinating for the team to perform a few experiments on his ability it was only a distraction for they still had work left in solving the “immunity gene” problem. After approaching her bosses Kerri wanted to go public with the knowledge that she had found a way to trigger a status change. She believed the revelation would bring valuable funding and kudos for the lab and her team.

However before the press conference was arranged the Protectorate learned of her successful experiment. Fearing that Kerri had created a process that could build an army of Alpha Superiors if it fell into the wrong hands, the Protectorate decided to intervene. The information could not be revealed to the world if the human race was to be kept safe.

Orion was thus ordered to destroy the facility and all research and leave nothing. This they did but Xander escaped. During the attack Kerri realised that the “soldiers” were going to eradicate everything and as with any good mother she sacrificed herself so Xander could get free. Now, alone on the streets of Pacifica, he did not know what to do other than wander. Having failed to captured or kill him, Xander knew that the people that had killed his mother might still be after him so all he could do was keep moving but after three days without food he was at near exhaustion. Luckily for him Orion was not the only one looking for Xander for the Night Rangers were also searching for the escapee. Aware of the attack as they had been monitoring Orion for some time (in their ongoing “war” against the Protectorate) the Alpha group had almost the same intel as their enemies. Thus they were aware of Kerri’s research and her son.

Saved by the Night Rangers, after he had learned about them and their work they asked him to join their cause. They believed Xander would want revenge but had no counted on the fact he knew nothing of the “real” world. This was a blow for the team and whilst they wanted to help Xander none of them believed they had the means to teach him what he would need to know to survive.

Knowing a great deal about other hero teams and their backgrounds Mind Storm (Shane Wright) arranged for Xander to meet Team Zodiac. Shane was aware that the Gemini Twins had also been brought up in isolation and felt that they might be the only people to understand what Xander was going through. Andrew McCabe agreed to help (despite the fact he was not keen on the way the Night Rangers conducted their “business”).

Temporarily joining Team Zodiac, the twins did manage to help Xander and introduce him to all the things he had never experienced outside the lab. The rest of the team also helped him to come to terms with the great loss he had experienced. During the time with the group he was also made aware of how member of the team had been affected by Black Shadow and when he coupled this with the knowledge of how members of the Night Rangers had been affected by the Protectorate he learned of the different ways both groups coped with their anger towards those that had wronged them. The Night Rangers wanted revenge whilst Zodiac had progressed beyond that need and decided to use their “gifts” to fight all wrongdoers and he liked their philosophy more.

Having gained experience of what the world was like outside of TV and computers he wanted very much to use his Alpha ability to become like the people of team Zodiac and the other costumed adventurers he had heard about. However he felt before that could happen he still had a lot to learn and the only way he could do that was by continuing on his path alone. He therefore took his leave from Zodiac and headed out onto the streets of Atlantica to start anew but before he went McCabe arranged to send him a modest allowance.

A couple of years later and now with a much better understanding of things in general Xander returned to Pacifica and once there he decided to fulfil his goal of becoming a costumed crime fighter. He took the name Trapper and began using his Alpha abilities to literally stop criminals in their tracks and leave them helpless for the police to pick up.

As his reputation grew he caught the attention of the Phoenix Alliance and they eventually invited him to become one of the reservist members that operated outside of Europa. Having achieved their recognition he accepted the offer. As well as helping them out, Xander also chooses to assist Zodiac when a situation calls for his “skills”. Ever since he stayed with the team and they made him part of their “family” he feels a strong loyalty to the group despite his choice of leaving.