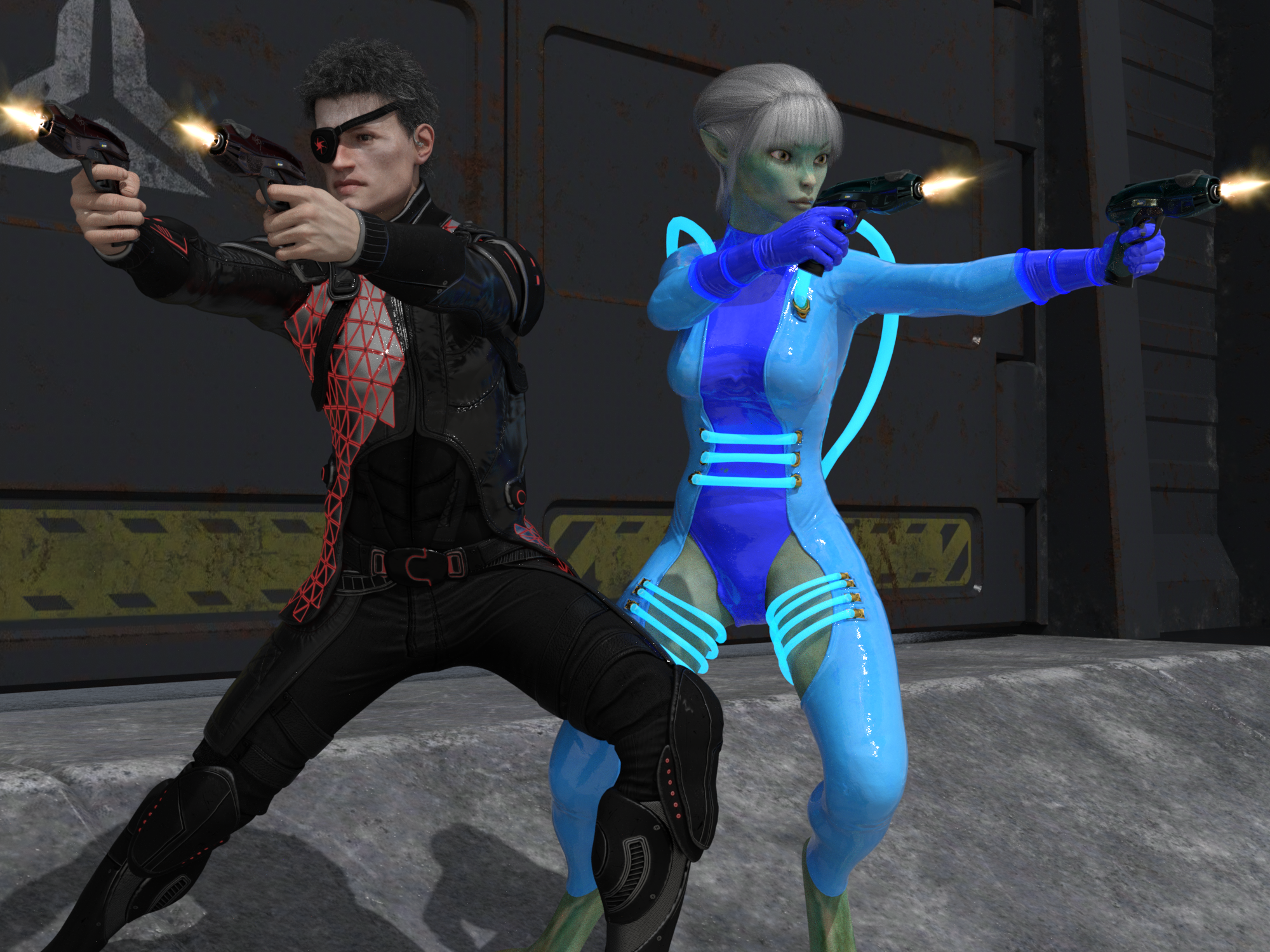 Shaun is another of many human victims that were taken by the Quarrud-Xaiqrons to be sold as slaves. He was one of the more lucky ones who managed to escape. Whilst others humans also did the same and headed back to Earth, his journey has been more difficult. For a start he took a more direct route through some of the more dangerous sectors of our galaxy and whilst other humans were lucky enough to get hold of advanced alien tech and transport, Shaun had to learn to fight, trade and gamble his way across the galaxy.

Whilst he would never choose to steal from an honest man or alien, on his journey home, Shaun has made a habit of conning intergalactic criminals and has earned a reputation as something of a rogue. Using the name Astroman, when he shows up at a trading post, trouble is not really far behind. In fact one of his many altercations led to him losing his right eye. In typical Shaun style though he adapted and overcame and ended up replacing it with an artificial cyber eye. This enables him to see in IR and UV light and he had it adapted to help him use it as a target system for his blade rifle. Shaun’s partnership with Neeyla began during another of his “trades” at a space station.

Neeyla had for her working life been a Lawgiver for her people. She maintained the peace on the Kralaan home world and its colonies. She however was too good at her job for she found evidence of corruption in the Lawgivers. Before she could get to the source, her captain was murdered and she was framed by his superior, Commander Nubylan Voo Tennil.

Murder for a Kralaan would result in one outcome – execution and with the irrefutable evidence against her and the testimony of Nubylan Voo Tennil, Neeyla realised the only way to save her life was to go on the run. It took her some time to escape Kralaan space and though the Lawgivers would not follow her beyond the border a bounty was instead placed on her head and Galaxy Force was notified of a murderer on the run.

Neeyla’s best course of action after leaving home space was to keep as low a profile as necessary and hope nobody recognised her. This is how she ended up on a trading post working behind a bar, serving the type of scum that she would have normally been arresting if they had been Kralaan space.

Having been a Lawgiver, Neeyla could recognise trouble when it appeared and she Shaun came into the bar that was enough for her to expect the worse and she was not far wrong. Shaun had actually managed to swindle a small time crime boss out of some money and naturally the victim was none too pleased. The problem was that the crime boss was a Brolithan and a well as being big and strong they knew how to keep a grudge.

After Sean had stolen from him, the Brolithan had dispatched a number of his people to teach Shaun a lesson. As he sat on his stool consuming a beverage, the hired help finally found him. Shaun tried to talk his was out of a situation and even offered to pay the money back but they preferred payment in blood and proceeded to  beat the hell out of him.

Neeyla knew seven ways to bring a Brolithan down but knew if she intervened she would get noticed. Ten minutes of fighting later and she could not stand idly by. The part of her that was still Lawgiver refused to ignore what was happening. Without stopping to think about the consequences she leapt over the bar and proceeded to take out the Brolithan mercs. Other clientèle in the bar considered this an open invitation for a bar brawl and the whole place erupted in a mass fight. Copious consumption of alcohol meant it did not really matter who was fighting who or what for.

In the middle of the chaos Shaun decided to slip away. Knowing security would arrive any time, he hid himself in a position where he could see the bar entrance as he wanted to know the fate of the Brolithan mercs. He hoped they would be arrested but after security moved in, they came out, with the bar tender in chains. This gave him quite a conundrum. She had saved him and though he did not know why the mercs had been allowed to take her, he did not consider the outcome to be all that good.

From a safe distance he followed the posse of five and then when the opportunity arose he attacked. The element of surprise served him well. Two of the Brolithan were felled with shots fired from the Rifle Blade. Another two he cut with the blade part of the weapon and the remaining one he simply hit with the weapon itself to stun the merc.

She did not seem best pleased to see Shaun again and protested at the trouble he had got her in but it was no time to argue. There was no time to unchain her either as he made his way to the transport hub and looked for his ship, another of his many “trades”.

Once at a safe distance from the space station he then managed to unchain the bar tender but instead of exchanging names she hurled abuse at him. Eventually she calmed down and he learned she was Neeyla and had a huge bounty on her head. Though if he had been more unscrupulous than normal he might have considered her a descent meal ticket but she had helped him and by the sound of her story she was in more trouble than him. Shaun therefore made her a promise that he would take her to his home and there she would not be chased, albeit he was not entirely sure what the people of Earth might think of an alien.

Though at first they were more like sparring partners,  in time the pair came to rely on each other and develop a respect that changed the animosity to more like sibling rivalry.

Eventually they made it back to Earth but soon found life their quite dull after what they had experienced. There were the times they jumped in and acted as “heroes” and that made for some excitement but it never seemed enough. For this reason they chose to return to space adventuring.

The first step was to prove to the Kralaan people that Neyla was innocent and once that was done, she was free to go home but instead she decided to remain with Shaun. Since he had helped her, Neeyla persuaded her government to speak on behalf of Shaun to get his record cleared.

Galaxy Force who handled the intergalactic law in that sector accepted the argument from the Kralaan Government that Shaun had done what he did out of the need to survive having been kidnapped. Now with both of the names cleared, they chose to become bounty hunters.

Their work has seen them come to Earth on a number of occasions for work purposes, and other occasions when some of Shaun’s criminal past has come seeking payback but each time he had outsmarted  them.

CLEA also believes the pair have crossed paths away from Earth with the Galaxy Force team known to Earth and Vanguard.