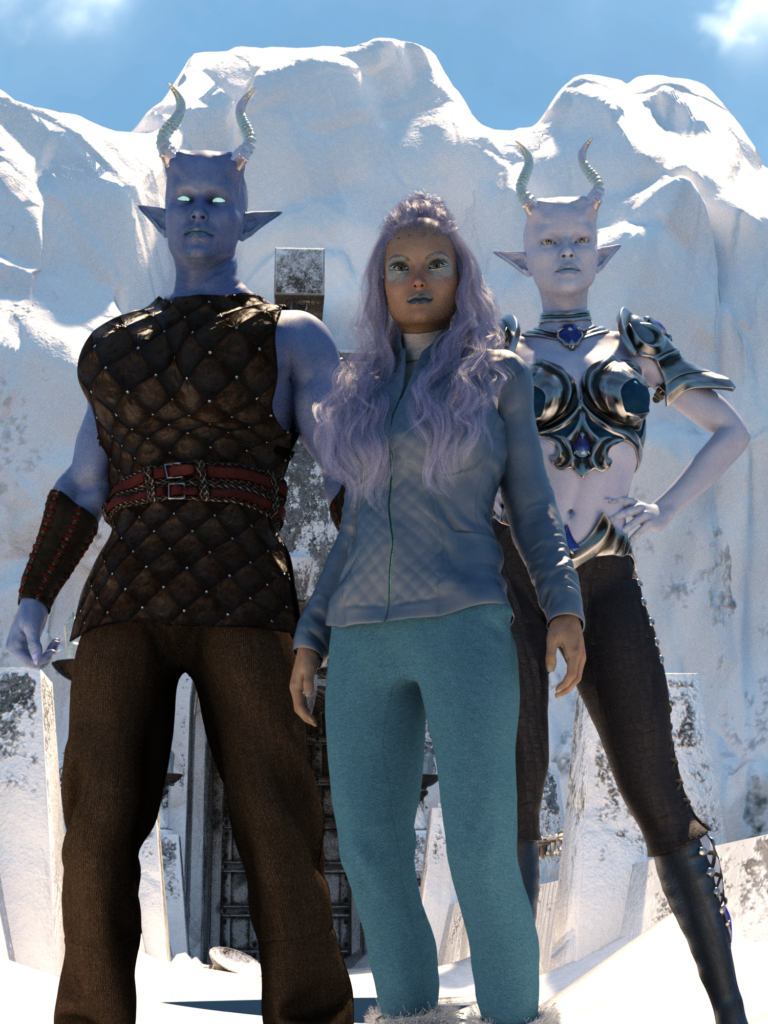 In many respects the Icen can be considered the same as the Quarrud-Xaiqrons in that their interest in our world is in the interest of collecting humans to be used as slaves. However whereas the Quarrud-Xaiqrons are aliens and come from our galaxy and use technology to accomplish their goals, the Icen come from an alternative reality and use a form of magic to achieve their goals.

As with a lot of magic entities it has been hard for CLEA to establish true facts and much information comes from legends and stories passed down through generations of family members. to make things harder the Icen only appear to have interacted with isolated Inuit tribes in the Arctic circle and a small area in Northern Canada.

From what we know, the Icen have been visiting our world for many centuries. According to Inuit stories they a period of high intensity Aurora Borealis marks their arrival. When they do arrive they create an ice fortress which serves as their base and prison. They also always appear around the same time each year and can only stay on our world for a short period of time, just over a week. Their actual location of the fortress appears to shift at random for each visit. but generally remain in the same large geographical area. The excpetion to this is the appearances of the fortress close to the same Canadian valley.

Scientific deduction speculates that the magical “bridge” the Icen creates can only link between realities at a specific time each year and at best guess the location moves because the bridge uses “weak” spots in the barriers that separate realities. Once here it then appears the bridge cannot be held open and another set of ideal conditions needs to present itself in order for the Icen to travel back to their reality. This theory is supported by the fact they need a place to “store” their captives.

Inuit legends refer to visitations of four Icen on each occasion until the eighteenth century when only two appeared regularly. This is corroborated in Canadian folk stories which record a tale of two  human champions who  succeeded in killing  two of the Icen and taking their “power stones”.

For a long time the pattern of events was similar. The Icen would arrive and build their fortress. Then they woudl begin collecting humans, who would immediately get converted into Ice Warriors. Once a small army was done there would be no need for the Icen to leave their fortress and the army would then proceed to collect captives to be taken alive.

In the begining the Inuit would fight back by any means possible. Though killing the Ice Warriors was akin to killing their own people, they recognised the fact that the enemy they were fighting was “dead” already. If the losses of the Army become too great then the Icen would simply convert move.

In  the Canadian valley the process was almost identical. However for a long time the Ice Army was challenged by tribes of Yetis who would work with locals to defeat the invaders. These Yetis are assumed to be Animal Hybrids “created” from the first Eopua Comet test strike. This would explain why they were few in number and as the centuries past the Yeti’s were reduced to nothing and currently only a single one is known, and now currently with Gaia. He had dealt with the Icen and visits from the Quarrud-Xaiqrons in the same small reason  but chosen to hand over the job of protecting the area to a pair of humans instead.

Since opposing the Ice Army is futile it is believed this was the reason they indoctrinated a human to act as an Overseer for them. As the Icen do not communicate with humans verbally, it is assumed that they decided that to cut down on the hopless sacrifices of potential workers they felt there was a need to have a human represent them. The job of the Overseer is therefore to explain the futility of their resistance. Since the Overseer does not appear to age it is assumed that she is either kept in stasis on the world the Icen come from or is kept young by being in possession of a Power Stone.

Whether it is down to “brainwashing” by the Icen or she simply likes the power she has been given, Khione appears to like her role so much that Boreas and Skadi do not have to do much after initial preparations have been made. Despite being human, Khione seems to enjoy commanding the Ice Army and being cruel to captives who try to rebel.

The Icen would not doubt have had a very much easier task if is not for the fact that in the Inuit areas the people have used magic to make the own champions and in the Canadian valley two champions in possession of the captured Icen Power Stones are using their own power against them.