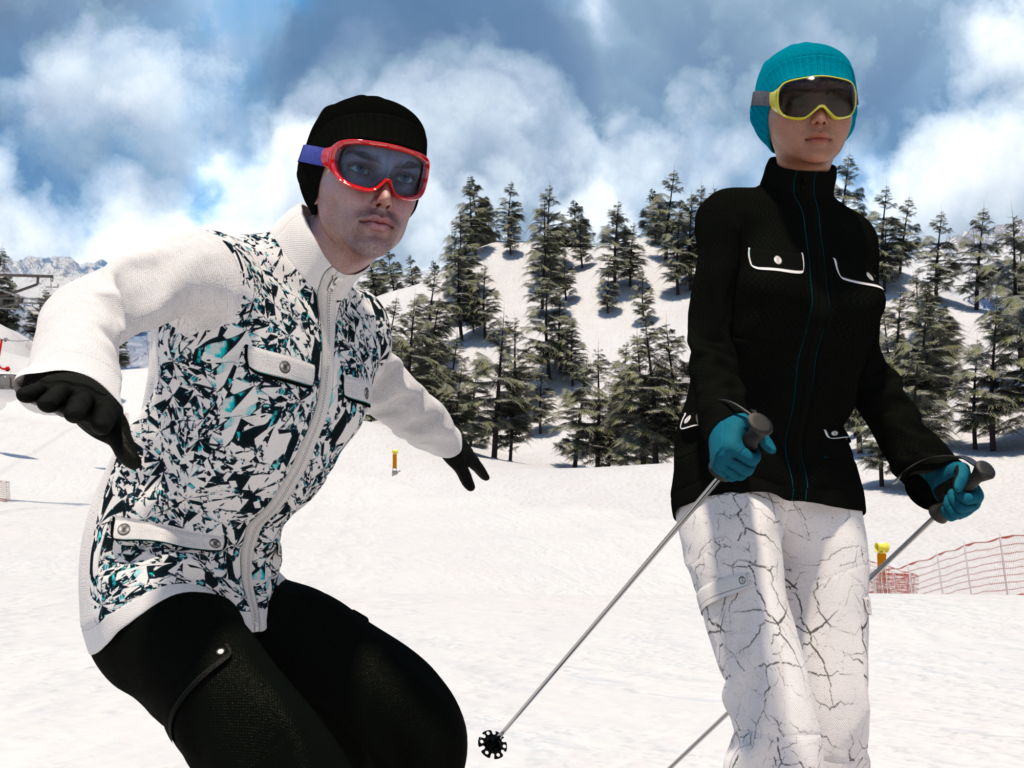 Growing up whilst your parents run a ski resort in Canada might have seemed a really good thing for Gillian and Ryan. Though half the year they attended boarding school and were away from home, the rest of the year they got the chance to get on the slopes starting at an early age.

What the pair of them though did not know is that as well as running the resort their parents also did another job, one of which only a few select people knew of in the surrounding area. They protected the valley from dangerous intruders. Some like the Quarrud-Xaiqrons came from outer space whilst others, the Icen came from a different dimension. Holiday makers to the area were kept in the dark from such dangers, as were Gillian and Ryan. Since there was as much chance of getting caught in an avalanche as encountering either the Quarrud-Xaiqrons or Icen then it was a calculated choice, especially as any attacks only generally occurred in the off season when there were not many visitors and Gillian and Ryan were at school.

After the had finished school, their parents knew that keeping their secret would be all the more harder. The one thing in their favour that helped was the fact that the area could go for a period of several years between attacks and so they used that time to maintain the illusion that everything was ordinary.

The truth though was finally revealed when Gillian was 22 and Ryan was 24. This was when the parents went out in the middle of the night and vanished. The resort’s caretaker Felix Lapointe went out the next day and could not find them. He could however find something that belonged to them.

Eva and Martin always knew what could happen and so had charged Felix with bringing their children up to speed in the event of tragedy. Though they were still grieving over their loss, Felix knew he could not wait and brought the pair to hidden room under the lodge. One inside, he asked Ryan to play and video and on the TV his father appeared on a recording that had been done in the very same room.

Martin first of all apologised for not being around. He then told them that the area they were living in was on occasion targeted by an alien race known as the Quarrud-Xaiqrons and also a group of dimensional travellers known as the Icen. Both he stated had one goal and that was to take human captives to be used as slaves. Martin presumed if they were watching the recording either group had taken him and his mother.

He then explained how and when the Icen appeared and mentioned that in the past the people Felix belonged to had fought the Icen but in the eighteenth century members of the Cudmore family had managed to attack and kill a pair of Icen and take artefacts known as Power Stones from them that gave the magical abilities. Since that time the family legacy was to use the stones to protect the people in the region. With him and Eva gone, that meant it was Ryan and Gillian’s turn.

After the video had ended, Felix handed over the Power Stones he had recovered and handed them over. When Gillian asked what their father meant when they referred to Felix’s “people”, he showed them, by transforming into a Yeti. Felix stated he would be there for them as long as they needed but it was better that as few people knew about him and the Power Stones.

Now left to running the resort and inheriting the mantle of protecting the reason, the young pair managed to take the pressure quite well. They practised with the Power Stones at every opportunity which was tricky as they had to hide what the were doing from the resort staff. As well as learning about the Stones, Felix taught them all about the two enemies they would try to be stopping.

The first one to show up was the Quarrud-Xaiqrons. Since it was their first encounter with an “enemy” Felix chose to take off the pressure of Gillian and Ryan by dealing with the threat on his own. However a holidaymaker saw him in his Yeti form and that led to Gaia coming to look for a “monster”. When the team of oddities learned the true nature of the threat they agreed to help Felix deal with the Blue Aliens. Not wanting to leave them out and thinking that it was best to really open their eyes, he got Gillian and Ryan to meet with the new arrivals. The sight of them was quite a shock but they soon got over that when they realised that the strange team of “monsters” was here to help.

Together the combined forces send the Quarrud-Xaiqrons packing. It was then that Gaia asked Felix to join them. He did not want to leave Gillian and Ryan but they thought they were ready to handle whatever threat came their way and so they suggested to Felix that if he thought he would be of greater use to be with Gaia he should go with them. The choice was all the more easy when Felix was told that they could return any time a threat arrived in the area, so he would not be going for good.

With Felix gone, Gillian and Ryan were on their own for the first time. When the Icen showed up they did quite well on handling the situation at first but then when the problem got too much to handle they called in Gaia.

As well as dealing with the Quarrud-Xaiqrons and the Icen, the pair use their Power Stones for other uses, mainly rescuing people in trouble but sometimes to deal with new threats. As part of the hero community they ended up giving themselves aliases. Since Gillian was skilled on skis, she took the name “Slalom” and as Ryan was skilled on a Snowboard he became “Half-Pipe”.