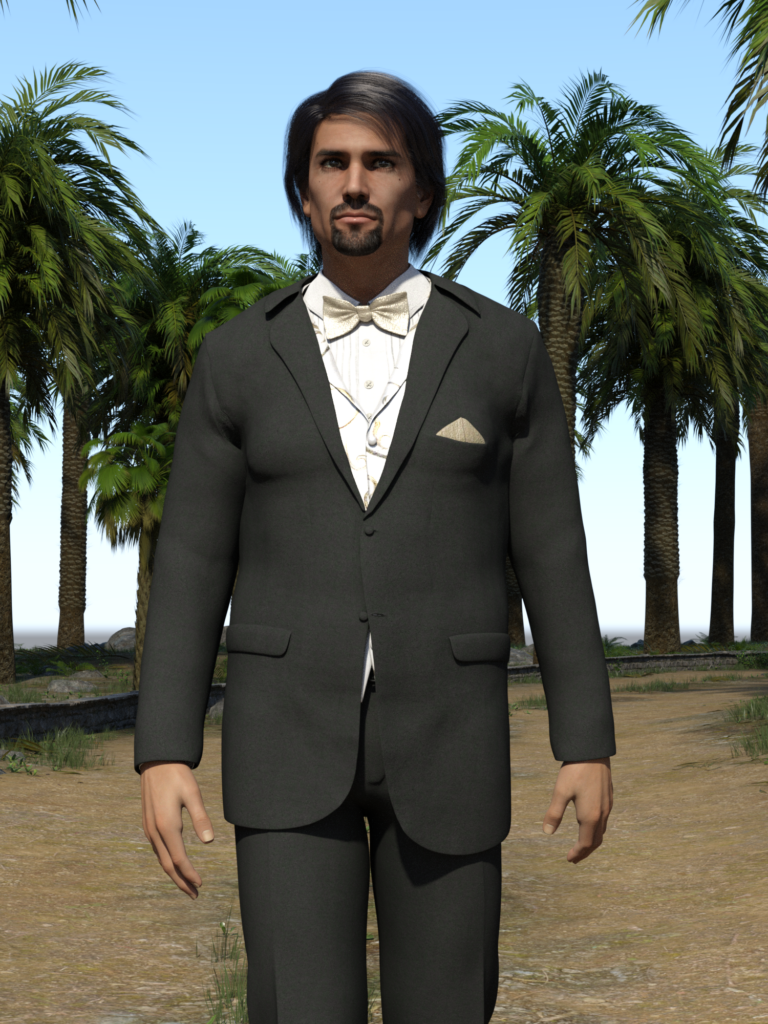 Refghyupaluxenn is a member of the alien race known as the Rret. Unlike carbon based life forms which required sustenance for survival, the Rret feed off “energies” of other races, specifically negative emotions. They are strong empaths and this allows them to hone in on potential feeding grounds from as far away as different star systems. To actually get in close and syphon of negative emotions they have the means to assume and shape they choose, their natural forms being a clear gelatinous mass.

Often Rret will try and increase their sustenance by deliberately instigating trouble.They can do this by making use of one of their natural defence mechanism’s which sees them expel negative energies. In effect they become an empathic transmitter and in groups of people, the influx of emotions such as pain, anger or despair can quickly lead to chaos and destruction. A single Rret has even be known to instigate a war and because of this they are universally hated by many races. High bounties are placed on them and hunters have access to technology that can identify their different physiology no matter what disguise they are wearing.

Compared to all the other Rret, Refghyupaluxenn is different. He was diagnosed with Nega Syndrome which means he can only process and transmit positive emotions. To his people he is considered an aberration and since he had the means to neutralise any other Rret by cancelling out their negative energies. Any Rret discovered to have the “disease” received a death sentence since they were a danger to their own race.

Refghyupaluxenn suspected something was wrong after the doctors investigation his condition requested security. He escaped but was quickly declared a fugitive. Unfortunately for him, wherever he went, as soon as he was identified as a Rret he was forced to flee again. He believed that his ability to assume any form would allow him to blend in but his people had become so notorious that advanced races had developed technology to identify Rret, no matter what form they took. When discovered Refghyupaluxenn tried to explain he was different but they simply did not believe him leaving him with one of two choices, get caught or flee.

Desperate to stop running, after many years Refghyupaluxenn decided to take a big risk and cross the border into Eopua controlled space. He knew the Eopua had a low tolerance for outsiders and felt that if he made it past the border patrols he might just lose his pursuers.

The plan worked and though he evaded the Eopua, the legacy of the Rret followed him because they were also known in Eopua space. One organisation under orders to apprehend any Rret was Galaxy Force and it was team X453W245Z that caught Refghyupaluxenn when his luck ran out. Fitted with psychic dampeners and thrown in a holding cell on their ship the only thing he could look forwards to was a trial and then a lifetime in prison on a planet that had been disrupted by other members of his race.

Refghyupaluxenn tried to persuade the crew that he was different, in fact the exact opposite of his people but they did not at first believe him. However Ozias decided to hear him out. Experience and age had taught him that not everything was a straightforward as it seemed. He asked Refghyupaluxenn to prove he was speaking the truth but the only way to do that was to show his empathic abilities worked backwards to other Rret and he could not prove that whilst fitted with the dampener. Ozias therefore instructed the computer to immediately terminate the prisoner if he or the crew started showing “unusual” signs of negative behaviour. The damper was then turned off and Ozias was instantly overcome with feelings of Euphoria.

Refghyupaluxenn had now proved himself so Ozias turned the dampener back on and released the prisoner. He was now left with what to do with Refghyupaluxenn. Since so many races had been affected by the Rret, Ozias thought that the chances of a fair trial would have been remote. This would not really have played on his conscience had Refghyupaluxenn been caught committing an actual crime. Ozias now considered that the Rret would be made accountable for his people despite the fact that they had actually tried to kill him.

Ozias knew that he could not Refghyupaluxenn free either for he was just get caught again and the next time the people responsible might not be so understanding. The only solution would be to take Refghyupaluxenn to a place where people would not come looking for him. This ironically is what the Rret had been trying to do when he entered Eopua space. After a good deal of thought Ozias realised that there was only one destination, Earth. Out of bounds to almost everyone, the Eopua had specifically limited outsiders to the planet which made it somewhat isolated. Only by special dispensation saw his team allowed to visit so it was perfect for Refghyupaluxenn.

After arriving at Earth orbit, Ozias sent down the human member of the team, Rizz, to speak with the Phoenix Alliance, the only people they felt were trustworthy enough. Rizz in turn asked if the Alliance could give refuge to Refghyupaluxenn. Though they said they could, they suggested that a better location would in fact be Harmony Beach Island Resort, the “retreat” for heroes and refuge for some powerful people that were being hunted for what they were as opposed to having committed a crime.

The “owner” of the island Lance Mickelson was then approached. Whilst he had some strange guests on the island, the Galaxy Force aliens were on a whole different scale. Ozias felt that they needed to make a personal visit as a means to gain trust. After hearing about Refghyupaluxenn and that he only wanted to be left alone, Lance decided he could stay. Since the alien had the means to feed on positive emotions and at the same time transmit such emotions, Lance suggested that perhaps instead of simply hiding that he make use of his gifts and become one of the staff members. If the guests were happy then they technically would “feed” him. As he never actually harmed anyone, as far as Lance was concerned it was a logical suggestion.

Refghyupaluxenn accepted without even taking a second for consideration.

Obviously in being around humans, Refghyupaluxenn adopted a human guise. About the only thing Lance did request was he find a more human sounding name since his Rret name was all but unpronounceable. This proved almost impossible so Refghyupaluxenn asked for suggestions from the other members of the island’s staff. As something of a joke one of them suggested that since he could be anybody then he should become Mr N. E. Bodie. Refghyupaluxenn liked that and kept it.

To outsiders and most guests Mr Bodie is simply the islands butler. They are aware he had special abilities but only the island’s staff are aware of his true nature. As there is a chance an alien bounty hunter might come to Earth looking for a Rret it is felt necessary to keep Refghyupaluxenn’s link to the race a secret.