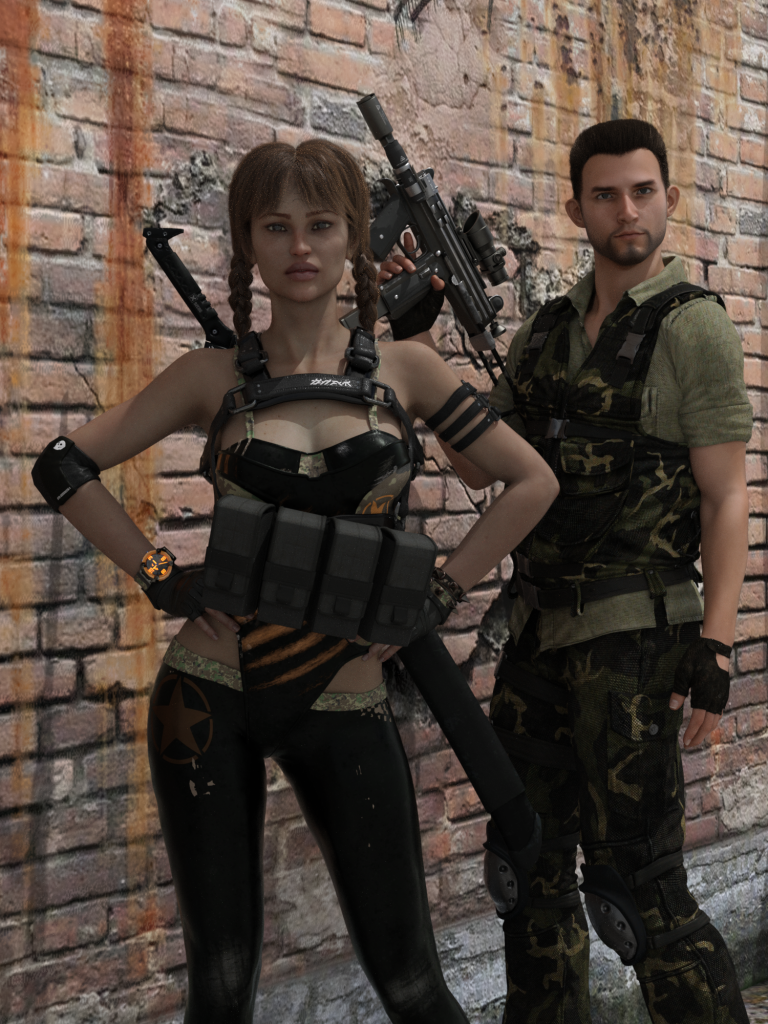 At one time this pairing actually appeared on CLEA’s database for all the right reasons. Jacqueline had originally carved out a career as a Special Ops soldier operating for the French military. Her work involved infiltration and catching dangerous criminals and it was during one of those assignments she met Edward Ross.

Intelligence had located a most dangerous criminal known as Lise Renard but before the authorities could arrest her, she had gone to ground. Jaqueline and her team was brought in to try and pick up the trail of the target. Using her superior tracking skills, Jaqueline was not only able to locate the area in which Renard had vanished but actually find her hideout. Intelligence though was missing one vital piece of information, the target was an Alpha Superior. Consequently when her team stormed the building they found themselves being cut down by exploding objects. Renard’s particular gift was the means to charge ordinary objects with energy and cause them to explode.

By the time Jacqueline worked out what was happening most of her team were either dead or injured and she was not been hunted the criminal. Since the framework of the building shielded transmissions calling for help meant she had to get outside but Lise had booby trapped everyone except the front entrance. This was obviously a trap so Jacqueline spent two hours playing a game of cat and mouse in an attempt to draw Lise away from the area.

When she finally appeared to go for the bait, Jacqueline broke cover and ran for the exit only to find her plan had failed because Lise blocked off the exit and began charging up objects. No doubt Jacqueline would have been killed had it not been for the intervention of Edward Ross.

He classed himself as a retrieval expert, particularly people, although everyone else regarded him as a mercenary. Lise had been paid to do a job and chose instead to run off with the money so the same employer had paid him to capture Lise. Though an expert in weapons handling, Ross had one secret weapon he often kept quiet about and that he was an Alpha Superior and his special gift enabled him to neutralise the gifts of any Alpha superior in close proximity.

When he entered the doorway, Lise suddenly found herself unable to charge any objects and then all he did was hit her with a stun grenade and take his prize. Jacqueline though also wanted Lise, so Edward gave her the choice and that was to waste time fight with him over Lise or spend that time saving as many of her dying team as she could. Unable to abandon her comrades, Jacqueline had no choice but to let him go.

For failing to capture Lise and getting half her team killed she was reprimanded by her superiors. Since it was dodgy intel that had led to the tragic circumstances, Jacqueline felt she was being made a scape goat and so within months of her disciplinary hearing she chose to quit her job.

She took up work as a private security specialist and though she never expected to see Edward again, fate would intervene. He was pursuing another target and bumped into her, literally, in the street. A chance encounter of that nature obviously surprised him and the distraction allowed his target to get away.  It was then that he spotted her uniform which he thought was odd as he figured she was career military but when she explained the fallout after failing to capture Lise, he understood although he did not think it was fair.

Since both of them had places to be, Edward suggested the meet sometime later over a drink. Although she hardly knew him, since technically he had “saved” her life she thought it would be rude to say no. Consequently two days later she found herself opposite him at a pub near the outskirts of Europa. Over a drink they recounted past stories and after explaining some of her military career Edward suggested she come and work for him. He was feeling a little guilty about his actions leading to her current change in career. She thanked him but ultimately refused so he asked why. Jacqueline then explained that she could not become a mercenary since a lot of work was not always within the law. He thought suggested that when she had lived with the rules she had been cheated so perhaps it was time she made her own rules.

Still unsure, Jacqueline agreed to a try out since she needed the money. Together they apprehended the person he had been following several days earlier. One job led to another and before she realised, she had become his partner. By this time work had taken them to America and it was over in Atlantica that they ended up having one too many brushes with the law but rather than jailing them they were given an alternative, become bounty hunters and chase down criminals that had jumped bail.  Since the APD was aware of Ross’s particular talents, the assignments they received usually involved people being Alphas.
CLEA too learned of the pairing and began employing them as special assets. Eventually they were given so much work that the APD freed them from their obligations and the pair began to work for CLEA full time. As the mission completions began to build up, the pair eventually became a victim of their own success. Those in charge of the CLEA budgets considered the pair were simply getting easy assignments and unilaterally chose to lower their payments to reflect this. The pair argued that they were not getting easy jobs but were just good at their work but nobody listened. Though Jacqueline had got used to playing by the rules even she had enough of being screwed so she surprised Edwards by suggesting they go and take their skills elsewhere.

After going rogue, when CLEA eventually learned where pair was and what they doing, Agents discovered they had gone back to Edward’s original line of work, retrieving people for the highest bidder. Furthermore it was learned that before taking on a job the pair have only two rules, the first being they receive half the payment up front and the second is they do not want to know why the client wants the targeted individual. In return they do not ask questions but this is more of a point that they do not want to know the eventual fate of their “victims.” Such is their reputation the pair are suspected to have taken work for the Protectorate.

Though obviously they specialise in catching Alphas, the pair have been known to go after “ordinary” people as well, depending on if the rewards are worth it.