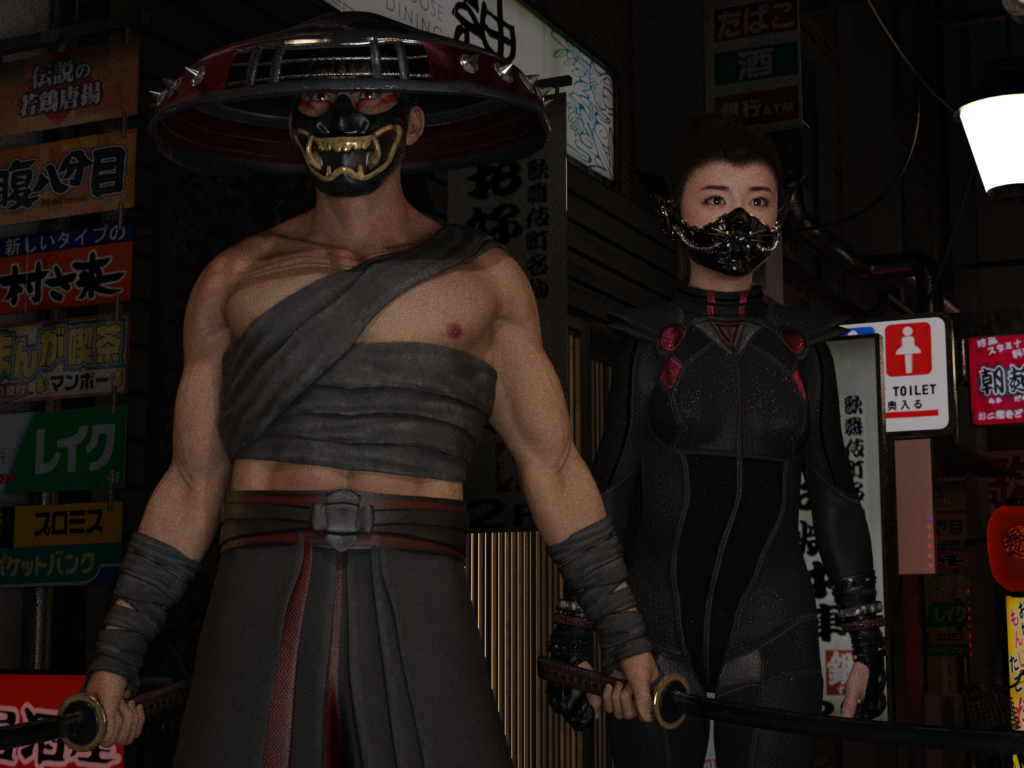 Since the Church of Tazael inevitably attracts the attention of the authorities, the Blood Abbot has a tendency to move to different locations. He is aware that as the head of the Church the police tend to track him so when somewhere appears to be getting a little “hot” he moves on. The Blood disciples in that particular area then scale down operations until he returns.

During one time when the Blood Abbot was active in New Tokyo the Disciples captured a young business man, Lum Zhang Yong who was visiting from China. Visitors were often perfect for being turned into Soul Hunters since they had nobody local who would miss them. However what was unusual was that in over 500 years a man had not been selected. Male Soul Hunters were notorious at displaying wild and erratic behaviour. Lum though had been observed to be well disciplined and so the Blood Abbott decided to try again at making a male Soul Hunter.

Despite putting up a huge fight, once back at the premises being used by the Church the Disciples were able to force him to swallow the blood of Tazael and then place the magic totem on him, a mask. He then became a Soul Hunter, his mission was to hunt down people and kill them, thus tainting their soul which would be sent to Tazael in the Dark Realm.

Though under the control of the Totem and the magic from Tazael’s blood, Lum still possessed his own will and did everything he could to try and take back control of his own body. However it was not to be and for three years he had to endure a living nightmare of doing the Demon’s bidding.

The presence of Dark Magic attracted Twilight to New Tokyo. When they crossed paths he nearly killed her but she got the upper hand. She could sense that under the dark aura there was an innocent trying to escape and managed to break through the dark magic and talk directly to Lum. He told Twilight what had been done to him, and she offered to set him free. Wanting revenge and to put at stop to the Church, Lum asked that Twilight free him Tazael’s control but leave him with the dark magic, as he intended to use their “gift” against the people that had made him a Soul Hunter.

Using a very risky ancient ceremony, Twilight was able to extract Tazael’s blood, giving Lum control over his own body for the first time in years. As a magic wielder Twilight was able to sense the dark energy in the mask and suggested he bury it rather than seek revenge. Lum though could not do that. The Church had taken everything from him in turning him into a killer and he wanted to prevent them making others victims.

Before Twilight left him, Lum asked her to teach him how to remove Tazael’s blood from others. It could take years for someone to become proficient in learning the arcane incantations necessary so Twilight decided on a different approach and turned one of his rings into a magical artefact. When worn he would be able to “see” if a person’s true aura beyond the control of the blood and if touched against a Soul Hunter it would absorb Tazael’s blood freeing them. Twilight warned him though that in removing the blood the process could kill the victim so there was a degree of risk involved.

The loss of a Soul Hunter was always considered bad for the Church so after the Blood Abbott learned that Lum was free, he decided to close down operations in New Tokyo and move on. He also now saw the error of the experiment in “turning” a man and reaffirmed the edict of only making female Soul Hunters. Lum guessed that at some time he might be back and so chose to perfect his craft. He spent all of his time training with gurus and weapons masters and learning how to control the Totem rather than have the Totem control him. With the Church of Tazael dormant in New Tokyo he used his new skills to hunt down other mystical dangers that operated within the city and took the name Zhong Kui, the Demon Hunter of Chinese mythology.

By they time the Blood Abbott returned to New Tokyo, he was ready for them. As soon as they started making Soul Hunters, he set out to stop them.Clearly the Church had altered the way in created the Soul Hunters for instead of a simple outfit and mask along with swords for weapons they were outfitted with more modern body armour and had claw like gloves. They also appeared to be using only women now. Lum wondered if that was a tactical choice. Though aware that they were dangerous, he had the ring Twilight had given him so he could look beyond the dark magic controlling them. From what he saw most of them had nothing worth saving.

That changed when he came across a Chinese student, Pang Xixuan who had been transformed into a Soul Hunter. He sensed within her a trapped person trying to escape. He saw his past self in her. Under the control of the Demon Blood she attacked him and would have killed him. Lum had no choice but to defend himself and that meant hurting her in order to incapacitate her. Knowing the power of the Totem he knew she would be healed but it still was not an easy thing for her to do.

Once disabled he took her back to an old factory he had been using as a base and restrained her whilst he waited for her totem to repair her body. When she awoke she tried to break free and then Lum took the risk and place his hand on her chest. The ring immediately started absorbing the blood, pulling it from Xixuan’s body. Once started he knew he could not stop and the screams she made as her gyrated in pain were the worst sound he had ever heard.

When the ring had finished its work, Xixuan stopped moving and Lum had to give her CPR to try and save her life. Though Twilight had been warned that there was a slim chance of success, he succeeded and saved her. Now what all that was left was for her to decide what to do.

Having saved her from serving Tazael, Lum expected her to try and return to her old life and for a while that was what Xixuan tried to do.Lum took the Totem from her before she left. However within a month she found that her old life was gone as she had been forever changed from her experience and she returned to Lum. She wanted him to return the Totem to her and teach her how to overcome its corruption as she wanted to be like him and fight the darkness.

Though Xixuan had every intention of going solo the pair discovered they worked pretty well together as a unit. She then became known as Shishi, a Guardian Lion. The pair of them obviously caused concern for the Church and the Blood Abbott fled.

When the Blood Abbott next returned, the Soul Hunters were very different. Unlike the “traditional outfits” the Abbott and disciples wore they were all equipped with modern styled amour and had returned to bladed weapons. The magic had also been changed so if a Soul Hunter was compromised their armour would turn to dust, thus preventing the Totem being used against the Church.

After forcing the Church to abandon operations in New Tokyo once more, the pair carried on their crusade. In time the obtained another ring, this time for Xixuan. As well as saving people from Tazael’s control the rings have proved invaluable in punishing the wrong people since they allow the pair to see the victim’s “true” soul.