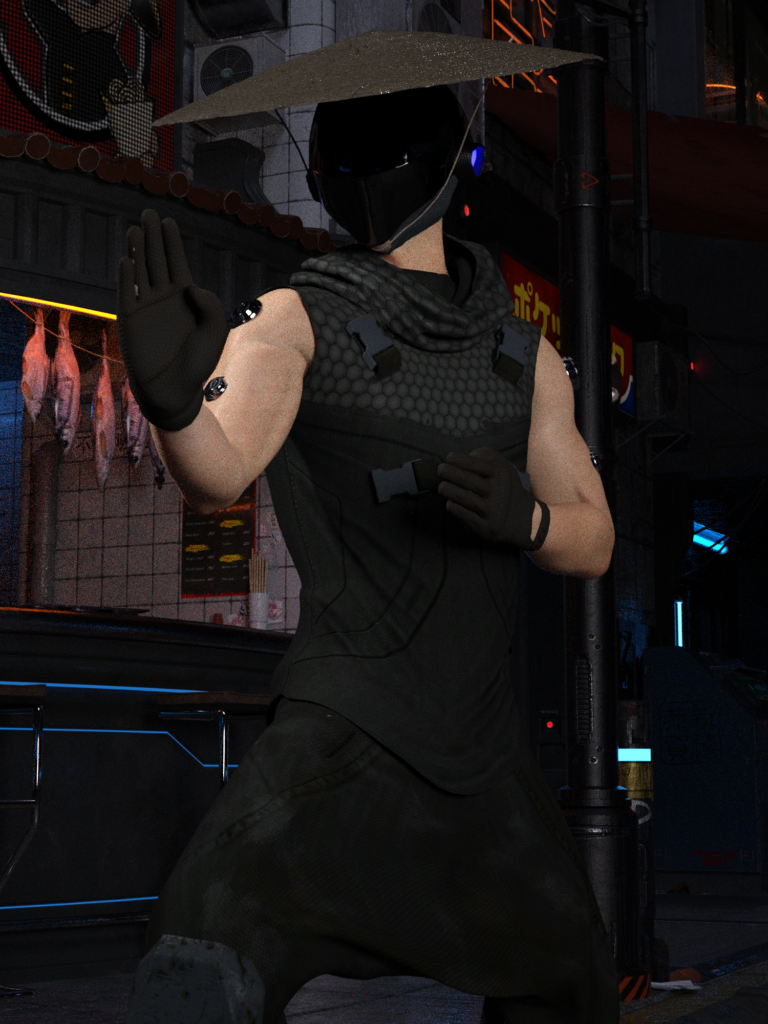 At one time Kichiro worked for a small medical development, MDM Enterprises company in New Tokyo. As well as other more normal medical developments, Kichiro had been hired as a lab tech to work alongside an expert in cybernetics, professor Sora Furakawa. Though not an expert in human biology, Furakawa had theorised that cyber implants could restore function to victims of spinal injury. By planting a “sender” unit in the brain and receivers in a paralysed limb, Furakawa hoped he could bypass damaged nerve areas. Such were his revolutionary ideas that no major company wanted to risk funding but MDM thought differently.

For years Furakawa had met with many disappointments and then one day he finally cracked the problem and cold progress from animal to human testing. Alongside his muscle implants, Furakawa had also been working on sensory implants to restore the sight in blind people and hearing in deaf people. Though such devices did exist his implants recreated the closest thing to ordinary hearing and sight, in theory.

After applying to the medical council for human testing MDM got noticed for the wrong reasons. The military saw the potential of the implants to make better soldiers whilst Dr Blacksmith desired the devices to sell to the criminal community. She therefore sent the Tech Collectors to visit MDM and steal the prototypes.

Without warning they attacked the building one night. Furakawa guessed the mercenaries where after and managed to slip out of the lab with the prototypes. Mistaking them for the military he took the prototypes to Kichiro’s apartment. A visit late at night was a bit of a surprise to the lab tech. An even bigger surprise was learning what had happened at MDM.

It was now that Furakawa pleaded with Kichiro to protect his work. As he was too old he could not run. However though Kichiro felt sorry for the old man he did not want to run. He liked his life. Desperate, Furakawa injected Kichiro with something and when he came around, he discovered that the cyber implants had been installed into him. Watching the news he learned that Furakawa had been killed by unknown assailants and Kichiro figured that he had refused to help whomever it was wanted the implants. He also guessed that they would come after him next.

Though the implants were installed, Kichiro knew it took them a few days to embed themselves properly and become functional and so tried removing them. That proved a failure and incredibly painful. Things got worse when they finally became active because since he had no spinal injury the implants ended up amplifying his reflexes and apparent strength. Also as Furakawa had installed the sensory implants his eyesight though improved was so sensitive to light that he had to wear dark glasses and his hearing had been amplified so that the slightest whisper was as a shout.

The Tech Collectors ended up tracking him down so Kichiro went on the run. Though he never wanted to do that he thought if he stayed he might not survive. The Tech Collectors created that much havoc that the Knight’s Forge became aware of them and figuring that some important tech was on the loose they intercepted Kichiro and got him to safety.

Even their expertise though could not remove the implants intact. Kichiro was left with a choice of leaving them in or seeing Furakawa’s life’s work destroyed. Despite the fact he owed the man nothing, Kichiro felt that since the old man had died, he did at least deserve justice and some sort of legacy and so he chose to leave them in.

The Knight’s Forge therefore created him a special “helmet” which would allow him better control over the sensory implants. They suggested that as he now knew of their secret organisation that he should stay with them for safety. Kichiro though wanted justice and figured he needed to turn vigilante to get it but had no idea how to fight. Despite the fact he now had fast reflexes and great strength he had no idea what to do.

Seeing an opportunity the Knight’s Forge offered to train him and then let him become a free agent for them. Aware by now that the Tech Collectors had killed Furakawa, disrupting Dr Blacksmith’s operations seemed strangely appealing. Though whatever he did would not bring the old man back crippling the people who had killed him was a good enough revenge in his opinion.