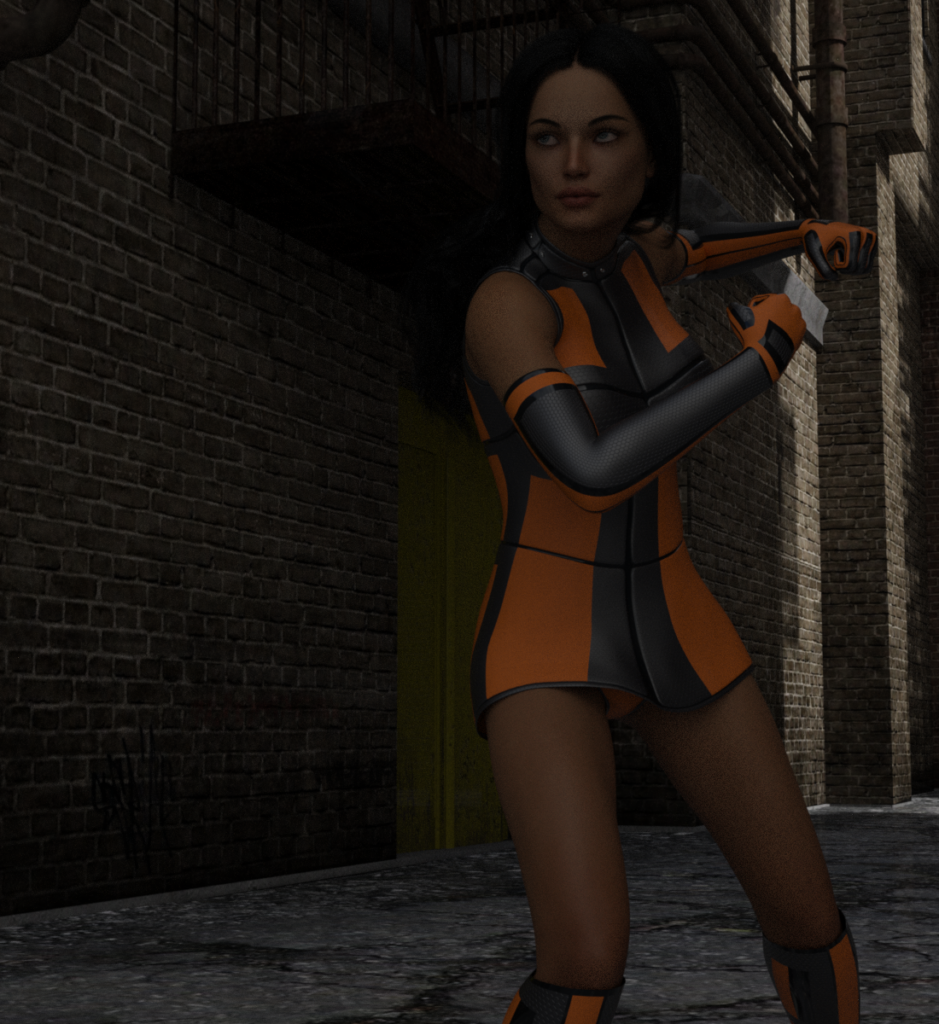 A hero with the means to swap places with her target.

Tessa was one of the first heroes to make an appearance following the bringing down of Black Shadow by Team Zodiac. For a few years she used her gift as an amateur crime fighter and even became a reservist on the Phoenix Alliance. Then everything changed when a tragic incident left her mentally scarred.

At the time she was trying to capture a thief and during the chase across rooftops managed to close in on him. Having almost exhausted herself she could no longer access her Alpha ability and so the confrontation got physical. The thief had a long criminal record and would be due to spend a long time incarcerated if caught. He told Tessa that he could never go back to prison and so out of fear tried to force her off the edge of the roof top.

Already weakened she could not prevent the actions of someone so desperate and found herself falling. As she stared upwards whilst hurtling to the ground, the adrenaline surge enabled her to access her abilities one more time and she swapped places with her assailant. From the roof top she was left seeing the look of horror on the thief’s face in the last few seconds of his life.

Though cleared by the courts on the charge of manslaughter, Tessa felt she could no longer continue her acts as a vigilante, and so retired from the hero community. G-Wiz of the Phoenix Alliance tried to persuade her to seek counselling and return as a crimefighter but she refused, because every time she even considered the idea she kept seeing the thief’s face in her mind. Fate though had other ideas for three years later a hostage situation arose in her home city of Europa. A single gun man had held up a group of people in an office block after a robbery had gone wrong. The police requested assistance and asked for CLEA knowing their specialist teams could help in assaulting the building. However Chief Shaw suggested that due to the time factor he deferred the matter to the Phoenix Alliance. A quick assessment of the situation by G-Wiz from a neighbouring building led him to realise that since the gun man had surrounded himself with hostages there was a good chance he would get off a shot and kill one of them whenever they tried to get into the building. Digitise reckoned she could disable the criminal by travelling along the electrical wiring and emerging in a surprise attack but G-Wiz was sure that the gun man was so highly strung that he would still manage to start firing. He was not prepared to take the gamble but did have an idea of how to resolve the situation. He called Tessa.

Though she wanted nothing to do with the idea of getting involved. She feared that someone else might get hurt due to her actions. G-Wiz was quite persuasive and hinted that her not doing anything would guarantee people would get hurt. Though very nervous about returning to her role as a vigilante, she agreed to assist and met G-Wiz at his location in the building opposite where the hostages were being held. Using a spotting scope she sighted the gun man but the moment she went to use her Alpha abilities she suddenly remembered the fateful night three years earlier and stopped, backed away from the window and slumped to the floor, unable to continue. The other members of the Alliance rallied around her and persuaded her to fight her inner demons and they provided her with the strength to do what needed to be done.

Returning to the window she picked up the scope and sighted the gun man once more before activating her ability. An instant later she was surrounded by hostages and the gun man found himself surrounded and outnumbered by the Phoenix Alliance. Following this G-Wiz invited her to return as a reserve member to the group but she turned him down as she needed time to “find herself”. She did however take his earlier advice and seek out a councillor and once she had finally put all her inner demons to rest she was finally able to return albeit part time as a crime fighter at night whilst working as an accountant during the day.