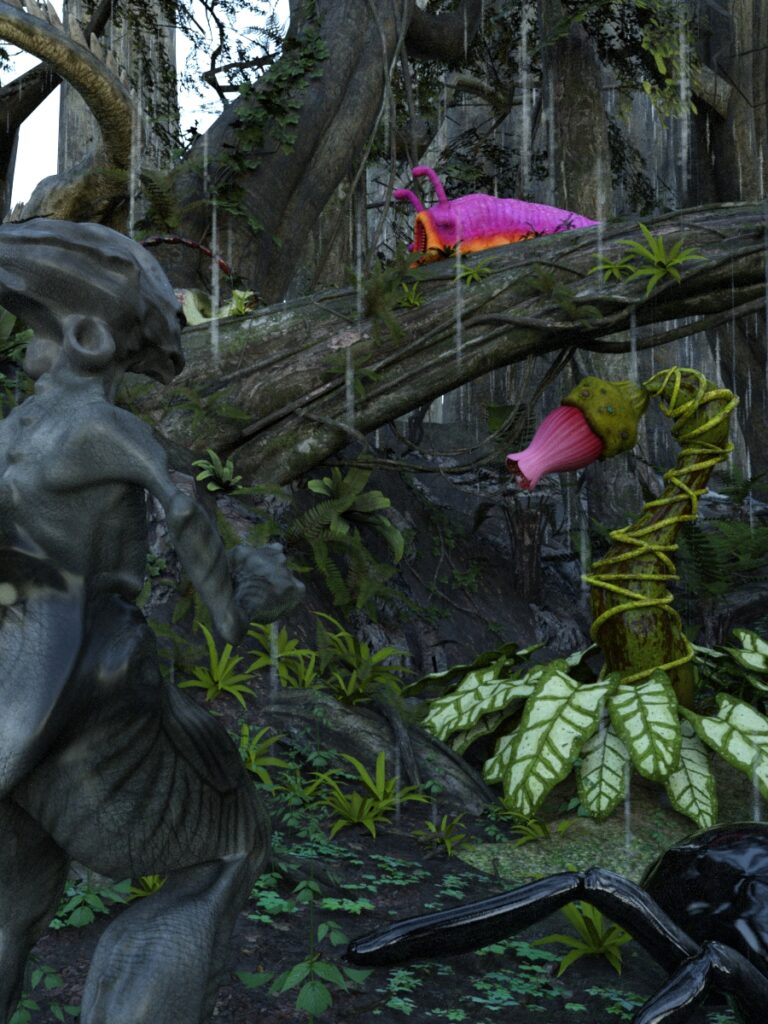 Terror Island is the unofficial name given to the land mass that was once known as Japan. When comet Lee-Kosolov broke up and struck the Earth on the 17th April 1972 the largest piece struck the Japanese mainland which was believed to have been obliterated in the process.

Only during the period of rebuilding did adventurers discover that Japan had not been totally destroyed but some had survived. However geological disturbances caused by the impact had resulted in much terraforming from the result of volcanic activity resulting in a small landmass consisting of new land and part of the existing Japanese mainland.

Since as much of the population had been evacuated before the impact, this new land mass was totally uninhabited. Some existing buildings survived the disaster on the “older” part of the island but the rest was almost entirely forest. The first visitors though would quickly discover that island though supported many unusual indigenous animal and plant types that had been mutated.

As it was Bacteria Z that was behind the mutations and collectively such creatures and plants were known as Species Beta, the island became known as Beta Island. However as very few visitors ever survived a trip to the land mass and it quickly gained a reputation, eventually becoming referred to as Terror Island and the name stuck outside of official channels.

Following the period of rebuilding, the island started to attract visitors, despite the dangers to life. Some of these visitors were of scientific persuasion and wanted to study the unusual wildlife but a large number were simply “tourists, that wanted to hunt the creatures for sport. As well as those, there also the adrenalin junkies who wanted the “rush” from being in such a dangerous environment.

Governments from the countries closest to the Island grew increasingly concerned. Without ample scientific study of the mutated creatures there was a fear that visitors might bring back some sort of biohazard, dangerous to normal people. To prevent any such dangers and international agreement was made which prohibited ordinary people gaining access to the Island by forming the Beta Island Oversight Committee which regulated visitors to the land mass. Even today access through official channels is extremely difficult and limited mainly to scientists and their support staff.

The BIOC also regulates the number of scientific expeditions on the island at any one time.

One of the first things the BIOC put in place was a fifty-mile exclusion zone around the island, patrolled by warships and fast attack boats which monitor the sea lanes. Though the military presence was supposed to act as a deterrent, statistics showed in the first year of  maritime patrols  an estimated 200 boats had to be turned back from attempting to travel to the island.

A secondary duty of the warships, providing the security screen, is to escort supply ships to and from the island. Civilian ships that are granted access to the island in this manner have to subject themselves to rigorous searches, to ensure that nothing is taken from the island or has attempted to stowaway. Since civil aircraft are not permitted in the exclusion zone, travel by boat is one of the only means in which research groups can move staff to and from the island. Aerial passage can be used but only via the military (see Task Force Z below.)

Military Presence arrives on the Island

The BIOC had expected that the exclusion zone would keep all unwanted visitors away. At first the naval screen was effective, but in time determined individuals found ways of exploiting any weakness in the coverage and managed to make landfall. Such people that were prepared to take great risks were often extremely powerful or/and extremely wealthy. In most cases, when an illegal expedition was discovered the individuals were found to be attempting to obtain the mutated wildlife for various purposes, ranging from medicine to the manufacture of bioweapons.

Luck prevented anything ever being taken from the island and reaching the general population (since the trespassers that had been discovered were intercepted on the return leg of their journey)  but the BIOC knew that it was only a matter of time before the lost containment.

Their fears were eventually realised when police discovered a mutated creature in a warehouse in America which was believed to have been taken from the island. The BIOC then felt they had no choice but to station a military force on the island.

This military presence started out as the Biohazard Task Force Group, and simply consisted of soldiers recruited from the countries that made up the committee. In time, the name was shorted to Task Force Z (the Z being derived from the word “Bacteria Z”).

Currently Task Force Z (or TF Z) fulfils two duties. The primary roll is that of a military force, required to keep trespassers off the island. As well as soldiers on the ground TF Z also maintains a large number of all-terrain land vehicles and aircraft. Such vehicles are usually armed, not only to deal with any rogue wildlife that might pose a threat but also from trespassers who quite often employ mercenaries for protection. Such criminals will often fight to evade being caught. In their military role, the TF Z has on occasion assisted science expeditions that have requested help to deal with problems that require heavy weaponry.

The secondary role of TF Z is that of support. Since they have heavily protected land vehicles and aerial transport, the Task Force assists in ferrying civilians to and from one of the islands “entry” points to their places of work which are usually located in remote regions. By the same token TF Z are also charged with transporting food, equipment and cargo to the research facilities.

Though civilian aircraft are not permitted to fly over the island, civilians can gain aerial passage out of the area via one of the two TF Z airfields situated on the island (one on the Northern tip and one in the South West corner). As these are military facilities, civilians are expected to follow the strict protocols. TF Z transports typically fly to destinations in China and Australia and civilian passengers are expect to depart and transfer to “normal” airliners in order to complete their journey.

A good deal of creatures on the island have near human intelligence. In predatory species this makes them formidable and extremely dangerous, which is why facilities on the island use scanning facilities and employ military grade weaponry. Though most creatures are land based which makes containing them easy for the TF Z, there are some marine species. Generally these seem to prefer to remain in the waters around the island. Scientists are at a loss to explain why they do not leave the area and speculate that the waters around the island are relatively warm all year round whilst further out the temperature drops. The marine creatures are perhaps not able to cope with a colder environment. As a precaution, where possible, larger creatures are tagged and their location is monitored. Should they venture too far then TF Z is ordered to force them back, and if that does not work then they are to terminate the creature.

Since Bacteria Z has the means to mutate humans it comes into contact with, hotspots where concentrations of the contaminant are discovered are continually monitored and can only be visited by people wearing full biohazard protection. This often prevents accidental infection of Bacteria Z but scientists and TF Z personnel visiting the island for the first time have to partake in a month-long course on the subject of biosafety since it is known that a cut or bite from a mutated animal or plant has been known to cause mutation in a human subject. Such events, though rare, are nevertheless a major concern.

As well as the mutated wildlife that can cause safety issues for visitors the island is known to have a localised phenomenon that can cause other problems with communications. The area located at the heart of the island is known as the Black Zone. It is believed rare metal minerals deposited by the comet are present in the area which as certain time of the year has a tendency to disrupt electromagnetic frequencies rendering anything from radio communications to radar completely useless for hours at a time. TF Z pilot navigating this area have to be aware of the phenomenon and be ready to switch to different modes of navigation. Similarly, personnel working at science stations situated in the zone are expected to know that there will be times when communications blackouts will occur. This is not usually a problem during normal operations but in time of crisis such facilities are totally cut off.