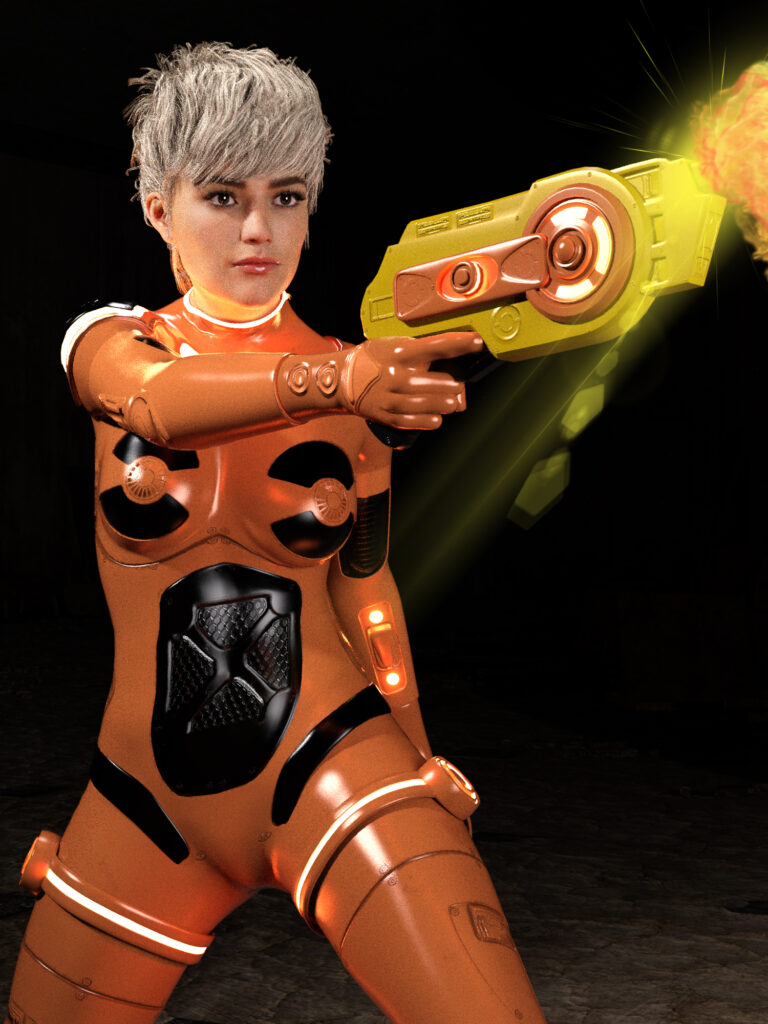 At one time it would have been highly unlikely to use the term “hero” and Shannon Walsh in the same sentence, mainly down to her idea of work was by stealing items for clients. Her career as a thief came to an abrupt halt when she was hired to retrieve a prototype heat gun. The money was good but Shannon got to thinking that things were not quite right when the information she got from her contacts ended up sending to a remote run down residential address .

Most places at least had some sort of security to make the theft interesting but there was nothing. It all seemed a little too easy and she was convinced that her contact had given her the wrong location. Despite this she broke in anyway and find the item her client had asked for literally lying on the kitchen table. Money was money no matter how easy she came by it but as she turned to leave she came face to face with a gun.

Holding the gun was an elderly man, Dr Robert Bowyer. He however was no match for her speed and she quickly knocked the weapon out of his hand before heading to the door. Before she left she heard him beg not to take his life’s work. The plea was enough to stop her temporarily and this turned out to be a stroke of luck for the door literally exploded. Had she been a second earlier the explosion would have killed her.

Bowyer complained that she had led “them” to her but she had no idea who “they” were. Unsure what was going on and whether someone was attacking her, him or both of them, she decided that it was best if she got them both out of harms way. However Bowyer turned and ran down some cellar steps and though it was tactically stupid she ended up following him, in effect trapping herself from the person or person’s who had just blown up the front of the building. Before she could ask what the hell was going on Bowyer through an armoured outfit at her and told Shannon to put it on. He also told her to shut up which infuriated her.

However it seemed necessary for Bowyer explained that he had believed he was creating the weapon for a legitimate security firm, only to discover he was building it for Black Shadow. After realising the truth he had fled, taking the weapon with him and had managed to remain off grid until she had found him. Guessing that Black Shadow had duped her into locating him, Bowyer told Shannon that she would be surplus to requirements and eliminated as soon as they had the weapon.

As people began walking about upstairs Bowyer told Shannon that the pair of them would not survive what was coming and since he was already an old man, he had elected to save her with an experimental heat proof armour. This was despite the fact she had just tried to rob him less than five minutes earlier. She was confused as to why the old man would sacrifice himself so he told her that though he knew she was a thief, Shannon’s her rebellious nature reminded him of his own daughter. In return for saving her all he wanted in return was to ensure the weapon never fell into Black Shadow’s hands. She agreed, but mainly as a way of speeding up the conversation since by now the footsteps were at the top of the stairs.

As they started coming down he quickly powered the heat gun and thrust it in Shannon’s hands. At that moment energy weapon blasts erupted from above and vaporised the old man. She however survived, protected by the suit. Using the  weapon she headed up the stairs blasting and burning anything that moved.  Though the assailants (Shadow Squad) were well armoured the heat played havoc with their armour and enabled her to escape.

For several days she lay low. Having been made a fool of she decided she wanted revenge against Black Shadow. Though she had never intended on honouring Bowyers dying request as she was both a liar and a thief, remarkably she ended up doing it anyway.

In going after Black Shadow she made her first tentative steps towards being a hero, albeit she never saw herself as one. With a price on her head by the crime syndicate, she was unable to return to her old career as a thief since nobody would hire her and everyone else would try to cash her in. That only left her with one option, live off her ill gotten games and fight back against the very same types of people that she would have considered allies at one time.

Admittedly roasting criminals has given her more fun than all her years of breaking into places and the irony is she has sometime ended up teaming up with some of the people that would have been trying to capture her in the past!