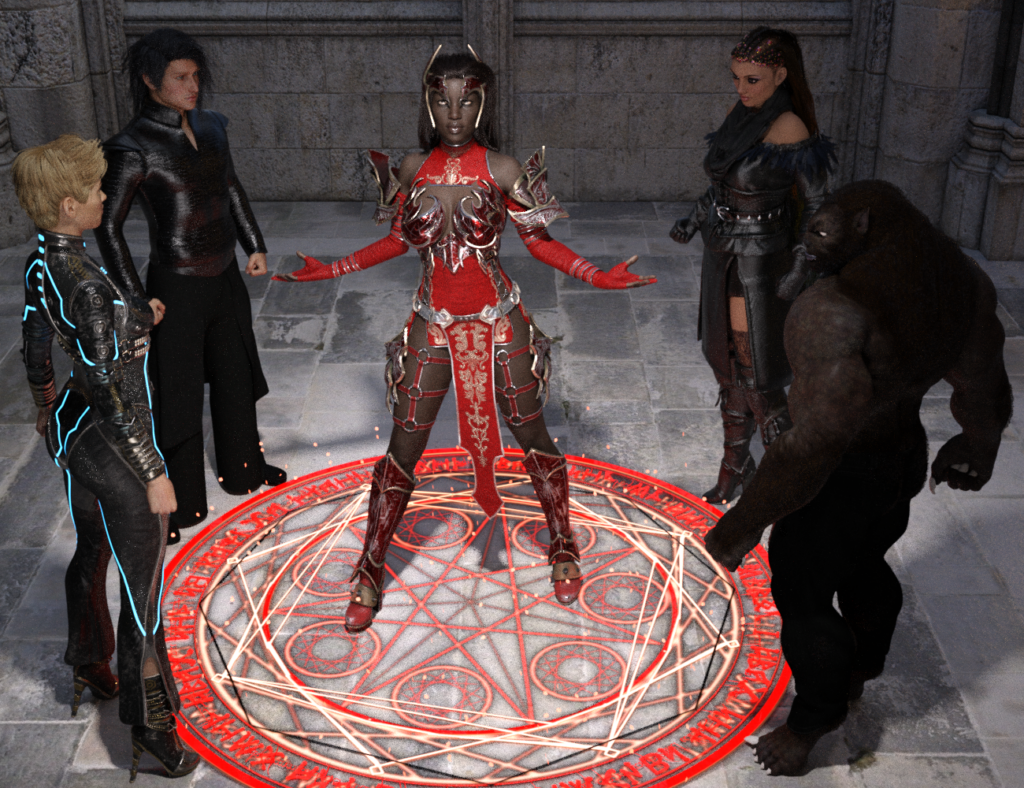 As with much in the Magic world since it has been kept relatively secret for millennia and only recently “discovered” the actual origins of this group are something of a mystery. From what little intelligence has been uncovered, all the members of the group have been considered outcasts by their own kind and have chosen to seek revenge against those that maligned them. To this end they are known to kidnap magical entities and literally “steal” magic from them or life essences. Just as rogue science groups experiment on humans, hybrids aliens etc. this group seems to do the same with magic. There goal seems to be to make themselves more powerful. Their end goal is believed to destabilise the Light and Dark Realms and establish a new one with them in charge.

Davenia Sawyers is the offspring of a human mother and a demon father. He gave her the name Kelora which means the deceiver. It was his intention for her to set up a cult in his name and thus amass followers. For her loyalty she asked to go with him to the Dark Realm. She was denied this as she was considered “inferior” by the other demons including her father. Out of anger she swore revenge and then summoned her father to the mortal realm and killed him. It is believed that Davenia then decided to form a group of other misaligned magical entities.

One of her first recruits was the fallen Angel Casziel. He had been banished to the mortal realm for interfering but had managed to aquire a magic totem that restored most of his previous power but not his wings. Punished for what he felt was trying to “do the right thing” he had grown disillusioned by games Angels and Demons played in order to avoid breaking the agreement. Kelora’s idea to destroy both realms and end the game appealed to him.

Alda Kuhn was found next. She had been a member of a coven of white witches and when it appeared she was experimenting with dark magic they had tried killing her through trapping her in a room and setting it on fire. This was the modern day equivalent of burning her at the stake. She however survived and through the use of magic restored her burnt flesh by taking the life essence of the other coven members, killing them in the process. This was how she earned the name the Flame Witch. Though powerful she knew others would come after her and so joining Kelora seemed a logical course of action to not only gain power but also for mutual protection.

Red Claw was found next. He had been expelled from his pack having grown tired of hiding in the shadows. He felt that werewolves were superior to humans and should therefore take up position to reflect this. For his view he was considered a threat to all werewolves and wherever he went they tried to kill him. When Kelora found him, he was close to death after a pack had nearly succeeded in its quest to get rid of the trouble maker. Nursed back to health he owed Kelora a debt and so joined the group.

The last member to join the circle was the renegade vampire Natasha Orlov. Having been an Elder with the House of Orlov, when Alexander Orlov had wanted sole power over the coven, he had fabricated lies that made her look like she had disobeyed some of their most sacred laws. She was given the death sentence but allies in the coven helped her escape. She had then set up a renegade vampire group the League of Blood to bring down the established vampire hierarchy. After years of being with them she felt that they were not achieving their goal fast enough and so left the group after hearing about the Circle. She felt only they could give her the  ultimate revenge she wanted.

With the five of them established they have been known to challenge Angels and Demons alike and at least one Avatar has fell victim to their evil schemes.