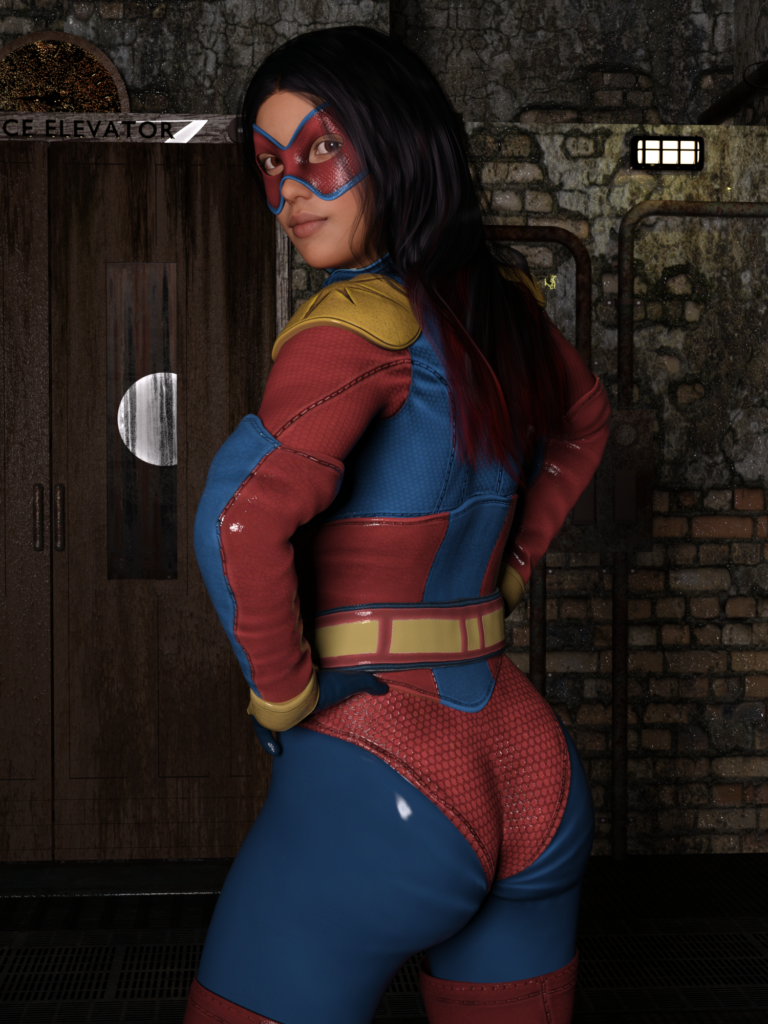 Yolanda is a second generation hero. Her father, Pedro, who brought her up alone after her mother died in child birth, was the previous “Vortex” during the first age of heroes.  He was a brilliant scientist and come up with equipment he hoped would be able to move objects around in the core of a nuclear reactor where nobody could venture. What he ended up creating was a device that could manipulate and channel energy fields. Figuring that the military might use his idea and turn it into a weapon Pedro decided to keep his invention a secret.

Then organised crime came to the neighbourhood. Taking an idea from the Alpha heroes, he chose to use his device and became the first “Vortex”. Then Black Shadow began its purge. Though Pedro was not an Alpha Superior he was still a “hero”.

Figuring out he might be a target, Pedro sent Yolanda to live with his brother Diego, making the excuse that work was  making bringing  her up difficult since he needed to be away from home. Diego liked his niece so did not have a problem in looking after her temporarily. What he did not expect was his brother to get killed in a strange “accident” and end up becoming her permanent guardian.

Having always been single, Diego had never really wanted a family but felt it was his duty to take on the role of her father. Though he inherited the house off his brother, Diego chose to simply sell it as he felt there would be too many reminders of Pedro for Yolanda if they stayed there. He did however consider that one day she might ask questions and so stored a few of Pedro’s belongings in the loft, in case Yolanda wanted them when she was older.

Whilst growing up the neighbourhood that Diego lived in started to turn a little rough as drug culture and gangs moved in. People started to remember the “good old days” and how the area had once been protected by a hero known as Vortex. Ironically Diego and Yolanda had talked about the hero on more than one occasion with neither being aware that Vortex had actually been Pedro.

When she turned eighteen, Diego took Yolanda into the loft and showed him where all her fathers stuff had been kept. At the time she was not bothered but three years later she had a job and her first apartment and decided it  was high time that she cleared it out of her uncle’s house.

Going through one of the trunks she found her father’s “Vortex” outfit and the belt device. Trying it on activated a voice file recorded by Pedro.
“Hello there my daughter. If you are hearing this then I am dead, killed by a crime syndicate known as Black Shadow. Since the belt will only respond to our DNA I know you and you alone have it on. I’m sorry I could not be there for you, and by now you know that I was Vortex. Though I never wanted this legacy for you, I leave you with my equipment and a choice.”

The message had Yolanda in tears but now she knew the truth of her father’s death. With the neighbourhood being worse than ever, she chose to honour her father and take on the mantle of Vortex. Diego caught her leaving and wondered why she was upset so she told him it was simple that the stuff all reminded her of her father, which was not entirely untrue.

Taking the stuff back to her apartment she examined it in detail. Though the belt fitted easily enough, the rest of the outfit was too big but that was not a problem to someone skilled with a sewing machine. After adapting the bodysuit it then took her a few weeks to master her abilities and finally, Vortex was reborn.