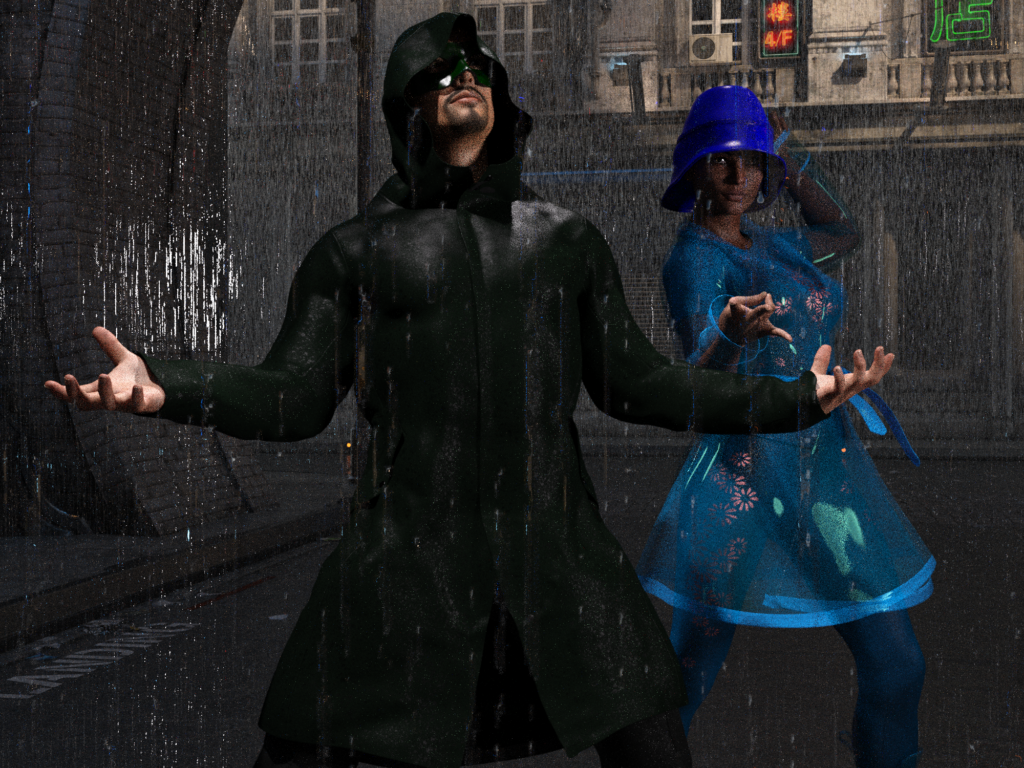 Whilst there are many Alpha Superiors who find the abilities a joy, to Rodney, for a long time they seemed a cure. When he learned he was an Alpha he saw the potential in what he could become albeit there was no guarantee he would ever become an Alpha Superior or if he did what “gift” he might receive.Then when his body started to transition from an Inferior to a Superior he considered that he would have preferred to remain more “normal”.

Rodney’s source of annoyance was the fact he gained an ability that was connected to his feelings, specifically negative ones. Whenever he was upset he or angry he could actually cause the heavens to open and generate a rain storm. People often joke that somebody who is upset is “under a rain cloud” but in Rodney’s case that was actually literal.

Because of his ability or as he considered it, an infliction, every time he went outside, even in summer he always ended up taking wet weather gear just in case someone made him angry. On one of his worst years New Tokyo recorded one of its highest recorded levels for rainfall. Though there were occasions he ended up helping other heroes, normally by putting out fires caused by collateral damage he never felt that there was much use for his gift, simply because it lacked control and any means to use it with finesse. This changed when he met Jane Witner.

Jane was just an ordinary nine-to-fiver in the city. Her family had moved from New Zealand to Australia when she was a child and in turn when she was older she had chosen to live and work in New Tokyo. She was not an Alpha and never imagined ever becoming one of those “heroes that was always in the media”. One thing she did like was collecting old jewellery. There were several small shops she liked to visit on the outskirts of the mega city and in a couple the owners knew her well. That meant they knew what she liked.

During one of those visits the owner showed her a new item that had been brought it. The piece was an old Maori necklace. Since she was descended from the Maori on her mothers side of the family she was often drawn to picking up anything Maori related. Offering her the necklace was therefore an easy sale for the shop owner.

After taking it home and leaving it in her collection for a few weeks, as it was so pretty she decided to start wearing it. Jane had no reason to suspect it was anything out of the ordinary until she went to fill the kettle and did not align it properly with the tap. As the water started to spray everywhere she reacted to correct the problem and the necklace glowed, at which point the water flow bent and aimed itself into the top of the kettle. Though she had seen what had happened with her own eyes she did not believe it and so deliberately tried to repeat the “accident”. The same thing happened, only this time she caught sight of the necklace glowing.

Over the next few days she did other experiments and found she could alter the flow of moving water. Curious as to why she was able to do this she started spending time at the library researching the necklace. Eventually after two months of consulting experts and reading many books she got an answer that would explain it. As the original shop owner had told her, the necklace was of Maori origin but not from New Zealand but from a small colony that had made a home on small island in the Pacific.

Though many people would assume such a place to be a small slice or paradise, there were times when such a place can become the complete opposite. Tropical storms created storm surges and flooding and on many occasions the people’s homes were washed away. They consulted their local spiritual leader who had mystical skills and asked him to do something. The man could do as they wanted but to do so would mean he needed to leave his mortal soul. In the best interest of his people he did this and created a Magical Totem, known as the Water Diviner.

According to the legend the Totem could only be used by a Maori and would allow them to command water, thus when the next floods came the village was protected as the Totem Bearer was able to divert both the rain and the flood waters out of harms way. How the Totem had come to leave the island was never recorded, although a suggestion in the book indicated that Western Settlers might have stolen it after raiding the island.

Having learned what she had, on any other day she would not have believed in magic but she had seen the necklace “work” with her own eyes. Jane was now left with the problem of what to do with it. Though she liked a “normal” life and had no desire to be a costumed adventurer, now that the necklace was in her hands she felt an obligation to use it for its ended purpose, namely to protect people, just like it had protected the village all those centuries back.

Since the necklace could only work with water that was already present, Jane felt that it was highly limited and despite wearing it all the time after nine months she never used it once in the service of others. This would change when a major dust up between superheroes and villains saw Rodney Hollins dragged into the fray. Following the battle, a news crew managed to get an interview with him, mainly because the other heroes left before they could get cornered by the press.

When asked why he had not been seen before and what his “super power” was, Rodney let it slip out this it was more a curse than a gift, mentioning that he could only make it rain when he was upset (at which point it started raining). Jane saw the interview although it did not make the prime time news. She saw Rodney as a potential “source” for water that she could use and believed they could help each other achieve far more.

It took her some time to track him down and though unconvinced at first, the eventually tried working together. That was when Jane’s idea came to fruition because Rodney could summon the rain and she could send it anywhere they needed, thus as a team they became greater than the sum of their parts.