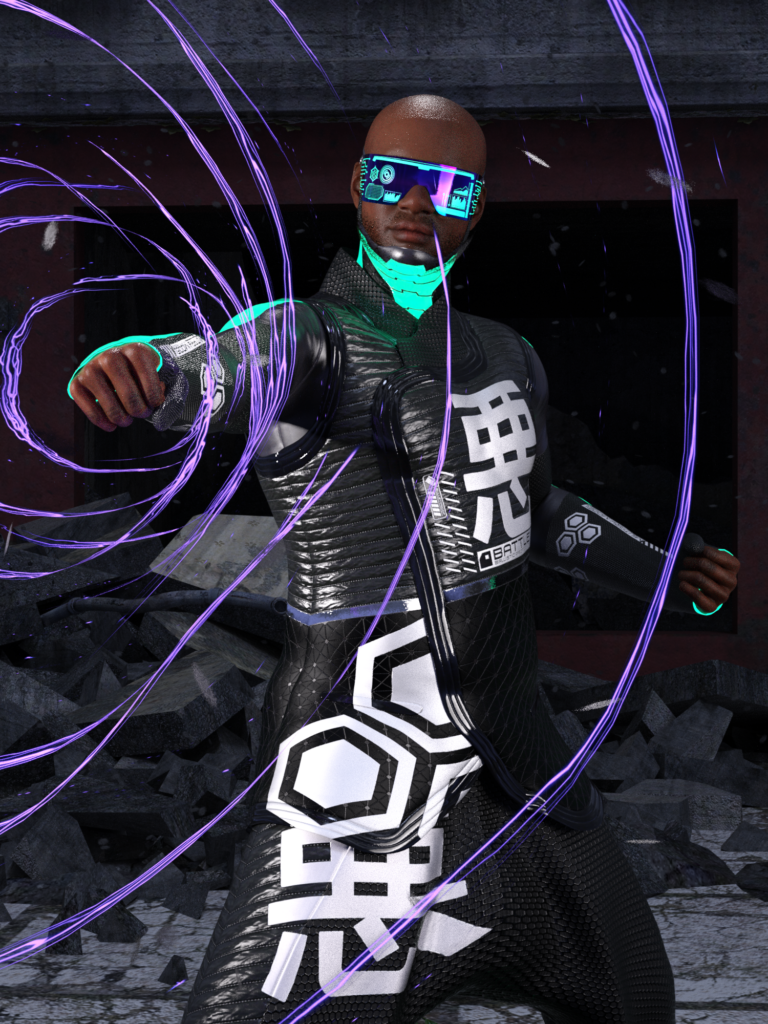 Early in his adult life he joined the armed forces before becoming disillusioned after poor intelligence during a mission led to the unessessary loss of some of his comrades. It was not the bad intel that was the problem for Dion, it was the subsequent cover up afterwards. From then on he decided that he’d rather look after number one and use his training for more profitable ventures. He therefore became a ruthless mercenary. CLEA therefore had been interested in Dion for quite some time (before the organisation found out he was an Alpha Superior). The change of direction though did not sit well with his family. The men in the family had always been career military and him becoming a soldier of fortune was seen as dishonourable. From that moment on they alienated him and his father even refused to acknowedge Dion even existed.

Intelligence gathered from people that have contact with Dion revealed that he was unaware he was an Alpha until his abilities triggered for the first time. The actual trigger event happened during a contract to kidnap the daughter of a government minister in the Far East country of Khirana. Like most mercenaries who had gone to Khirana during the civil war, Dion had chosen to perform jobs for the anti-government forces. The kidnap attempt was supposed to have been a means for the rebel forces to end the war sooner by obtaining leverage over the country’s leaders. However what Dion was unaware of was that the government had planted one of their own people in Dion’s mercenary group. As soon as the mission was in the final phases the inside man turned the tables and handed the other mercenaries over to government forces.

For the kidnap attempt Dion and the others were sentenced to death, a show trial to discourage other mercs for joining the rebel cause. However after being shot by firing squad, hours later Dion suddenly “woke” up on the slab in the morgue. His alpha abilities gave him the means to regenerate his own life force. He then attacked the worker. The commotion was soon overheard but when the armed troops arrived all they had was a mystery on their hands, a dead pathologist and a missing body. When a post mortem was performed on the man that had been killed they found all the blood had been drained from his body. This was the “cost” of Dion’s abilities

From that moment in time onwards whenever Dion “died” and came back to life he often left behind another body, drained of blood but with no puncture wounds. CLEA scientists originally theorised that as soon as he “awakened” Dion had to obtain fresh blood to stabilise his body and had the means to do so by drawinging what he needed by absorbing it through his skin. For a while Dion also beleived that but with time and understanding he realised that absorbing blood was just an “instinctive” responce which merely quickened the process. He could in fact recover without it, but gaining full strength could take weeks or days.

Being able to survive death has meant the Dion could take far more chances that the average merc which made him extremely dangerous. Though this made him the perfect soldier of fortune at the same time Dion started to gain a long list of enemies which left him with a constant need to watch over his shoulder.

Dion would eventually take a more heroic path after another case of bad intelligence sent his life in another direction. He and a group of other mercs were sent to take out an enemy listening post. However the enemy soldiers had long abandoned the building and when the group attacked it was being used as a shelter by refugees trying to escape the fighting. By the time Dion and the others realised the truth it was too later.

With so much innocent blood in his hands, Dion decided to walk away from the life as a mercenary. Though both events that had shaped his life had been down to poor intelligence, in the case of the former, only his people had died whereas in the latter he had taken lives.

Taking the alias Roman McKinley, Dion found making a new life was not without problems. Though he had money so starting over was not a problem financially, his conscience would not allow for a clean slate. Needing to make up for what he had done.

A chance encounter with the Leonard Jenkins aka Grey Man gave him the opportunity to make the jump from villain to hero. By acting as a means for the Grey Man to restore his life force, Jenkins no longer needed to steal it from others.

That went someway to making ammends but Dion felt he needed to do more and so he decided to use that money to help the community by returning to a sport he’d done as a teenager – boxing.

With no interest in turning pro as it might alert past enemies, Dion was content to open up a gymn for the local kids. This in turn brought him into contact with his family for his cousin was quite a talented amatuer boxer. At first he avoided the urge to invite her to join his gymn. Though they’d not seen each other in years and the chances were she would not recognise him, he considered that there was a slim chance that she might realise that Roman McKinley and Dion Gardner were the same person. That in turn would lead to some difficult questions and if she did choose to join then it might also alienate her from the family. He had already been isolated and did not want her to go through the same fate as him.

However Dion learned that Marissa and two others had become vigilantes operating under the guise as the “Street Sisters”. Still retaining some contacts from his old life, he was able to follow Marissa’s activities. Though he admired what she was doing, over time he noticed the trio taking on bigger and more dangerous challenges. It was clear to him that the family did not know what she was doing and therefore there was nobody to advise the group. Though she did have support from the Knight’s Forge they did not really watch over the group. Dion’s experience with his own enemies had taught him that sooner or later their luck would run out.

Before he could work out a way forwards the alien Zorn found him. Interested in Dion’s very unique Alpha abilites the alien had the Broker capture him and study his genetics. The nett result of the experiments altered those abilities. No longer immortal, he instead gained the ability to manipulate gravitons. After this the Grey Man parted company with him for he was now in danger from Jenkin’s abilities and lust for life force energy.

Though angry at what had been done to him by Zorn, Dion learned that it was not all bad news, since his new abilities enabled him to become the costumed vigilante that would be known as the “Black Hole.” Having a duel life gave him an understanding of his cousin that he had not had before. Fighting crime gave him a buzz whereas when he was a mercenary he was just given orders and carried them out. Now he had the means to make his own decisions. The only down side was that as with every other Alpha whose abilities had been artificially “changed” he did not have full control over them. In his case it was down to regulation. Not only did he run the risk of overloading himself he could sometimes use far too much power when a situation did not require it.

Despite his new “hobby” he did not forget about the concerns for Marissa he had before Zorn had interfered in his life. After a few months of being a vigilante he decided against his better judgement and reached out (as Roman McKinley) and invited her to train at his gymn. Marissa was surprised to hear from McKinley. She had heard his gymn was quite successful with amateur boxers but had no clue whey he had invited her out of the blue. Just as Dion had theorised from the data he had gathered, the Street Sisters had no meeting place other than the streets and so began using the gymn as an unofficial “headquarters”. Marissa was the boxer and they acted as her “supporters” and none were aware that there moves were being observed by Dion. Luckily for him Marissa did not recognise he was her cousin.

It was only after the Street Sisters made enemies of a Street Gang known as the Southeners did Dion reveal he was Marissa’s cousin. That happened when the Southeners, armed with guns chased the girls back to the gymn. As they shot in through the entrance the Shocker dropped down from the sky and barred the way of their pursuers. Sending out gravity vortexes he could stop bullets in flight pull enemies towards him for a beat down. He neutralised them in seconds forcing the gang to retreat in fear.

Black Hole then entered the building. Though they knew of the vigilante and his reputation of playing rough with “bad people” they were not entirely sure how he would treat them and so backed away with some trepedation. Dion then removed his mask to gasps of surprise from the trio. It was only now that he told Marissa his real name which would be the second time in a matter of minutes she had been surprised.

Now his secret was out, Dion offered the trio a spare room at the gymn to use as a meeting place and make it official. He also offered to teach them combat skills that he’d learned from his days as a mercenary. Seeing the benefit of learning from experience Dion chose to let the girls work together without his interference but offered his help any time they were in trouble, thereby acting as a mentor rather than a leader.

Though his vigilante exploits became known to the Knight’s Forge and they were aware of his abilities being unstable they chose not to supply him with technology in the form of an outfit. They were aware of his true identity and past exploits and were holding off from assisting him until they were sure he’d proved himself. This was despite the fact that the Forge had helped the Street Sisters and therefore his cousin.

Despite this he would eventually get the means to control his abilities better by another source after defeating the Tech Collectors when they tried to steal from a New Tokyo company that specialised in military grade armour protection. As a “thankyou” they gave Dion an experimental body armour they were developing and fitted it with custom tech which allowed him to regulate his Alpha abilities.