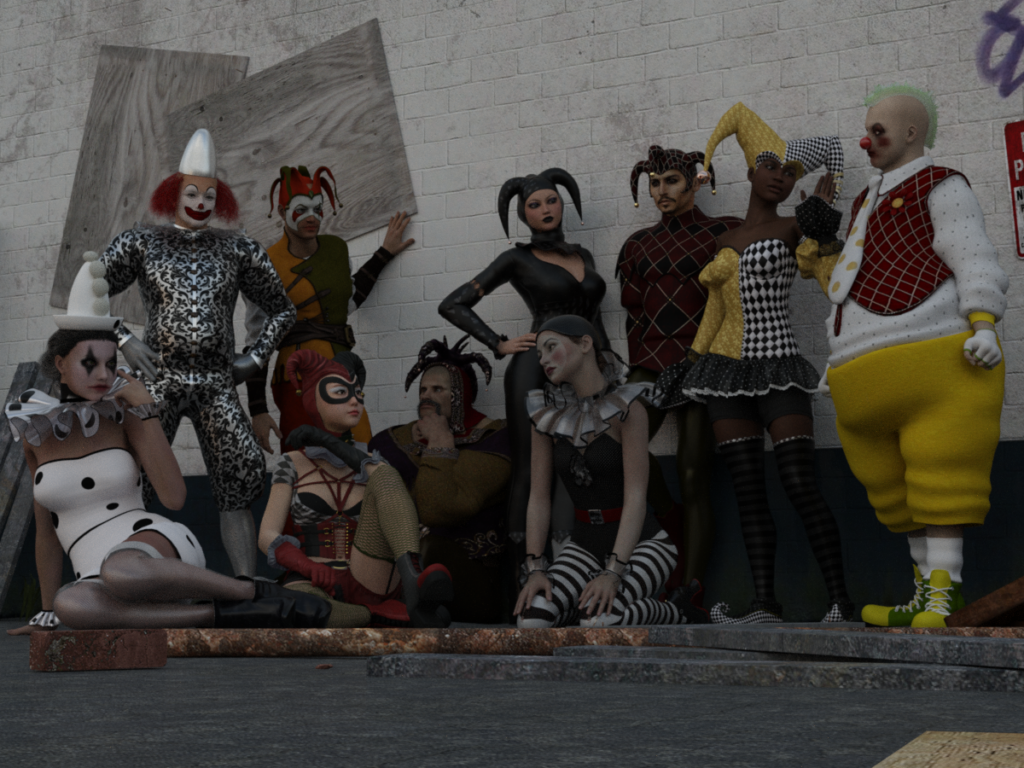 Victims of crime can react in different ways to what has happened to them. Sometimes they recover, other times they fight to change things to prevent others becoming victims but in the case of the Comic Crew, each member became driven by revenge and eventually turned to a life of crime.

Originally the Comic Crew were just nothing more than ordinary people who happened to run afoul of Zorn. He had been conducting yet more experiments in his “mission” to transform the entire human race into Alpha Superiors. The ten were some of his “mistakes”. Snatched at random each one was impregnated with genetic material in the hopes they would become Alpha Superiors. The process did in fact work on them but their “powers” were unpredictable or uncontrollable and thus deemed as failures.

Since he had still turned each one into an Alpha Superior of sorts, Zorn decided they were of limited use in his long term goal  and so returned them to where they were taken. Before that could happen Zorn took the precaution of wiping each one of their memories so they had no recollection of him or being kidnapped in the first place. The only thing each of the victims had in common was they had a long period of “missing time” and they had inexplicably gained Alpha abilities.

The Alpha abilities though meant they could be dangerous to be around and so they were forced to keep away from friends and family. Alone, and in need of answers to what had happened some turned to looking online for others who had gone through the same unusual events. This is how the ten came to find each other.

It would take nearly two years for them to actual meet face to face and by this time some of them had started to have memory flashes of their missing time. Piecing together some of the data between them they all realised that someone had deliberately altered them. At first they thought it was a government conspiracy until they began seeing images of a strange creature and a person who was known as the Broker. They recalled little else.

Wanting answers they worked together, researching the Broker and the creature (Zorn) in the hopes of finding either one. Eventually their work paid off as they discovered that a crime boss known as Ragnarok often employed the services of the Broker. Though they had Alpha abilities, neither of them were fighters and the idea of trying to force a crime boss to arrange a meeting with the Broker was something they were scared of actually doing.

This was when they learned of the duo Lethal Joke, who were running a revenge campaign against Ragnarok after they had been altered by the Broker’s “boss” which they presumed was the creature they had seen in their visions. Seeing Lethal Joke as a means to get them closer to finding the Broker they set out to find the pair.

The initial meeting was fairly bumpy but eventually a compromise was reached. In exchange for helping them get to the Broker, the ten would help Lethal Joke against Ragnarok. Unlike Lethal Joke who knew how to fight and were attuned to violence the ten others were not. Lethal Joke therefore trained them in working together and embracing their darker sides. Eventually they started to work as a cohesive unit and adopted clown outfits inspired by the mentors. The ten became the Comic Crew.

For a while the alliance worked. Lethal Joke and the Comic Crew were highly successful in striking a blow against Ragnarok. During this time the Comic Crew started to come to terms with their unique abilities and no longer felt the need to be rid of them even though it had separated them from their families. They had a new family now. Significantly the lost the urge to hunt for the Broker as they thought if they ever found him or his employer then their abilities might be taken from them.

Despite having been involved in a ‘war’ on Ragnarok’s criminal empire, the Comic Crew had learned that power had given the crime boss everything he wanted and the life of crime started to tempt them. Lethal Joke kept them in line for a while but ironically it was their quest for revenge against Ragnarok and embracing their darker sides that had help fuel the idea in the Comic Crew.

Things came to a head when money became tight and the Comic Crew chose to rob a bank. Lethal Joke were furious as they had no desire to harm innocent people. Though they had lost some of their inhibitions they had abided by one rule and that was criminals were the only ones to be subjected to ‘pain’. The Comic Crew were now criminals in their eyes and so the alliance was shattered.

From then on the Comic Crew became full time criminals. Between them they had lost so many years hiding away from everything and everyone when they were scared of their power. They were no interested in running a criminal empire as that seemed boring. All they wanted to do was enjoy the high life. Stealing and robbery gave them that life and the more they acquired the greedier they got. Soon they amassed a small fortune between them but nothing was ever enough so they continued to commit crimes. When they got bored they would often simply rob something that they deemed a challenge.

Naturally they attracted the attention of law enforcement and vigilantes but in many cases the entire team could never be caught and so long as one of them remained free that person would find a way to get the rest of the Comic Crew out of incarceration.

Lethal Joke has on numerous times tried to put an end to the antics of the Comic Crew, accepting they are responsible for creating the problem but since the Crew worked with the duo for a while they both know each others tactic’s which results in stalemate.