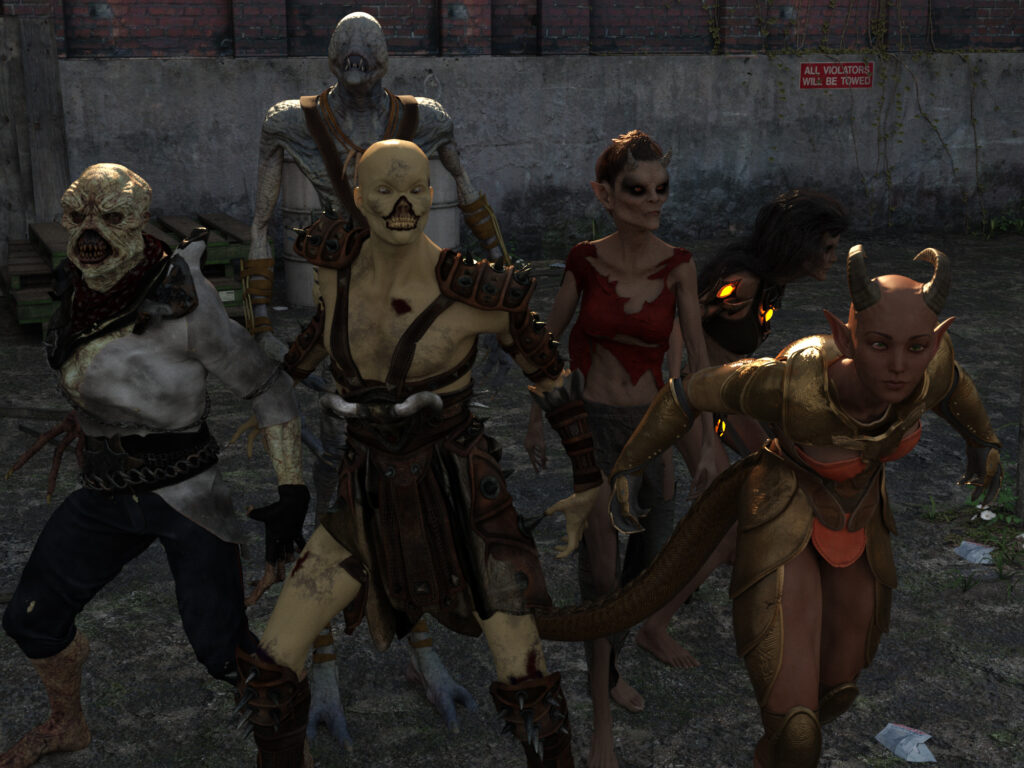 The Abomi Nation were at one time they were “normal” people but were radically altered to become the monstrosities they are now known as. All of the group were at one time either playboys or successful business magnates and the only thing that linked them were the fact they were all members of the Praetorian Club. How they came to be transformed would have been a complete mystery if it was not for the fact that CLEA had placed an undercover operative in the club.

According to the report the Urbanae had captured what appeared to be an unusual animal hybrid. What they had in fact captured was James Worrall who was the offspring of a demon mother and a human father. Despite his heritage he had fought against the darkness and tried to live a life of peace.

For nearly four decades he succeeded before the Templar found him.She hunted anything that she detected was linked to the Dark Realm and did not care if that person was reformed or not. The Templar saw individuals only as good or bad but her hypothesis was not built on a persons actions. Since she detected the seed of a Demon inside him she considered him the latter and tried to eliminate him.

To fend her off, James had to adopt his partial demon form. After nearly an hour the fight between them was a stalemate. Though he had strength he did not want to kill the Templar. Then in the middle of it all the Urbanae came across the battle. Thinking James was a hybrid they captured him. Being weakened this was easy.

At the time he thought he was being rescued by vigilantes. It was only after being taken back to one of the Praetorian Club’s facilities did he learn the truth. He tried to explain to them that he was not a hybrid but they would not listen. Consequently he refused to fight so he was subjected to Lanista‘s brutal methods.

Even she could not break him though. Frustrated at the fact the “hybrid” would not fight, Praetor decided to put James in a special match, a group bout to the death with some vicious hybrids. She figured that James would have no choice to fight in order to survive.

This turned out to be a mistake. After fighting to keep his darkness under control, when the match started he simply sat there. The crowd cheered as the other contestants decided to take turns in attacking him. Finally something inside snapped and James unleashed the dark magic he had fought so long to control. In a few seconds the energies that erupted from him turned the other hybrids to dust.

The crowd cheered, unaware of exactly what they had witnessed. Having failed in his lifelong quest to retain the darkness he stood up and addressed the crowd. According to the transcript in the report he said “I have tried to walk the path of good. I have tried to keep my bloodlust under control, yet you stand there cheering. If you enjoy blood through conflict then you shall have it. I will make sure the world despise you and hunt you. They will see you for the darkness and ugliness each of you have on the inside. This is my gift to you.”

Sighting six particularity “happy” spectators on the front row James poured out dark magic turning them into monstrous entities. Such was the power of his curse that his own body burned up in the process. The six monsters now started attacking the rest of the crowd before the Lictor moved into fend them off, at which point the fled with into the confusion of the panicked crowd and made their escape.

Since James made a dying curse, it is near impossible to break meaning that they are forever trapped. Like Vampires they need blood to survive and just as James has predicted people would choose to either flee or attack the group, hounding them like wild animals. This would lead them to developing hatred for people and eventually they have resorted to criminal activities to survive. Though it is believed they have no killed anyone they have resorted to kidnapping, either to “feed” off victims or to force people into getting what they need.Though the choice of attire is unusual, it has been considered that the primitive designs are deliberate, the appearance being to further instil feat in their victims.

Whilst they would eventually call themselves “The Abomi Nation” it was CLEA who came up with the codenames for each member of the team.